The ASO initiative, launched today and dubbed the Virtual Concert Hall, follows the forced cancellation last month of all the orchestra’s concerts until at least June 20 as a result of the COVID-19 restrictions.

“Our regular schedule of live concerts is currently on hold due to COVID-19,” managing director Vincent Ciccarello says in a message to audiences. “However, in the interim we are pleased to bring you a series of online recitals featuring our very own ASO musicians.

“While the online experience is unlikely to replace the thrill of a live concert, we hope they’ll give you some solace and company.” 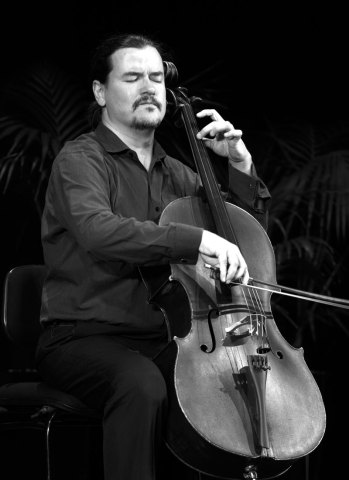 The Virtual Concert Hall is being led by the orchestra’s director of artistic planning, Simon Lord, with the first recitals being filmed over recent weeks in the Grainger Studio and encompassing music said to range from “the sublime to the humorous, from much-loved classics to the less well-known”.

While the performances are free to view, they will be available for only up to seven days, with a window on the website inviting donations.

The orchestra intends to upload new recitals by its musicians every Wednesday and Saturday. The next one, going online tomorrow afternoon, will feature principal cellist Simon Cobcroft, who says he hopes it can bring some joy to people at home in isolation.

“I miss playing the music I love, I miss playing with my colleagues, and I miss the frisson that only a concert with a wonderful, engaged and appreciative audience brings,” he says.

Other SA arts companies are also adapting quickly to provide work for their artists and entertainment for audiences during the coronavirus crisis.

Adelaide-based Australian Dance Theatre this week announced plans for an online season called ADAPT, which will see it upload performances of some of its most celebrated works each fortnight during May, June and July.

The season will begin on May 1 with the Helpmann Award-winning The Beginning of Nature, which was presented as part of the company’s inaugural Adelaide Dance Festival and features a score sung in Kaurna language. Each ADAPT performance will be free to view for a limited time, and will be accompanied by interviews with ADT artists and collaborators who worked on the project.

“Like everyone, this year looks significantly different than the one we had planned, which included a busy and diverse performance and collaboration schedule both here in Australia and overseas,” says artistic director Garry Stewart.

“However, it has also presented us with the opportunity to innovate and reshape our company to appeal to a digital audience and I’m really thrilled with the creativity that has been unleashed with ADAPT.”

The first Australian Dance Theatre performance of 2020 to be cancelled as a result of COVID-19 restrictions was Colony, a new work exploring “the animal within the human” which was to have been presented last month at the Art Gallery of South Australia as part of the 2020 Adelaide Biennial of Australian Art: Monster Theatres.

The AGSA, which has been forced to temporary close, is now presenting a series of digital experiences around Monster Theatres. They range from virtual tours of the exhibition and podcast interviews with artists, to new online activities for children and teenagers including a Monstrous Neo Digital Teen Takeover next Saturday.

“We’ve been making work in the digital space for years and we’re thrilled to be working with our creatives to bring this platform to life and to keep interacting with our audiences during this downtime for live experiences,” says executive producer Kaye Weeks.

“Our artists are the lifeblood of our company, and keeping them working, engaged and creating is something we’re prioritising.”