With the work of more 1200 Aboriginal and Torres Strait Islander artists from across the country on show in 63 projects at the Art Gallery of South Australia and numerous partner venues, the festival offers much to explore.

A highlight of the opening weekend is the Tarnanthi Art Fair at Tandanya, which offers the chance to buy work including textiles, jewellery, woven objects, original paintings and prints from artists from around 50 Aboriginal arts centres.

“It’s a great opportunity to see artists from across the country and what they’re creating in their art centres … you have a really diverse range of art works, not just in price range but in media,” says Tarnanthi Festival artistic director Nici Cumpston.

“Most artists are happy to talk and share what they’re doing. It’s a fantastic atmosphere.”

While the art fair is on this Friday, Saturday and Sunday, most of the Tarnanthi exhibitions run for at least a month, with the AGSA’s own displays – representing the work of almost 200 artists – continuing until the end of January.

Although Blood Money has been exhibited elsewhere, the painting of Uncle Stevie is being shown for the first time at Tarnanthi and Cumpston says it captures him perfectly, even showing him dancing Paul Keating up to the dais at the inaugural Tarnanthi Festival in 2015, when the former PM presented the opening speech.

“The paintings are large but really intricate, so the more you look the more you see … you learn more about each individual as well.”

Presley’s Blood Money Exchange installation has also been set up in the gallery foyer for the next three days only, giving visitors the opportunity to swap Australian dollars for Blood Money Dollars (limited-edition banknote-size prints of works from the series). 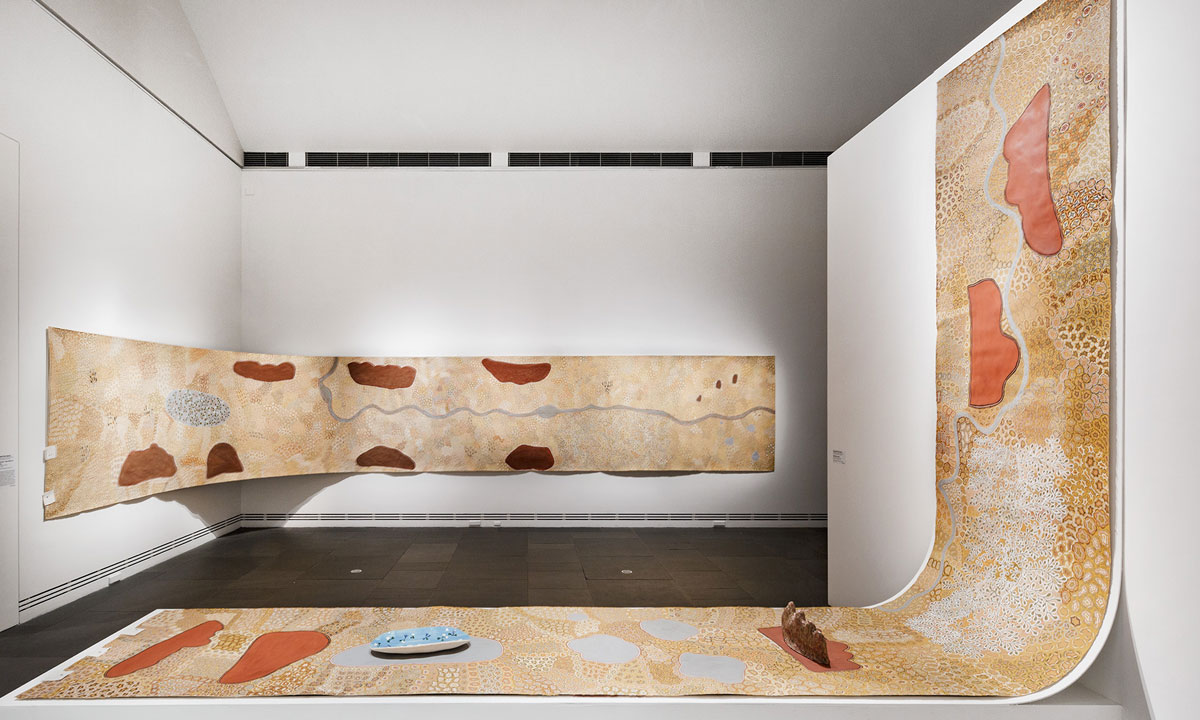 Being in Country – Woorrilbem to Thamberalm and Standing on Country, by Peggy Griffiths-Madij, at the AGSA. Photo: Saul Steed

Adjacent to Blood Money are Peggy Griffiths-Madij’s striking paintings of her Miriwoong homeland in the East Kimberley, created using natural earth pigments. The two works – one 8 metres long and the other 10 metres – are wrapped around the walls and floor to achieve the artist’s wish that visitors should feel immersed in her country, Cumpston says.

“She’s depicted her country topographically. When you look closely you can’t quite believe the tones and hues she’s achieved using natural pigments … you can see the sparkle of the iron oxide in the earth.”

A wall in the gallery next door is dedicated to The Ballad of Billy Gardiner, a series of bold portraits by the late Aboriginal elder Nyaparu (William) Gardiner which were inspired by the 1946 Pilbara strike by Indigenous pastoral workers.

In highlighting the diversity of art in Tarnanthi, Cumpston also points to the work of Darrell Sibosado, from saltwater country north of Broome in WA, whose pearl shell carvings (riji) representing humpback whales, rainbow serpents and turtles have been reimagined in 3D through large Corten steel sculptures mounted on the wall. 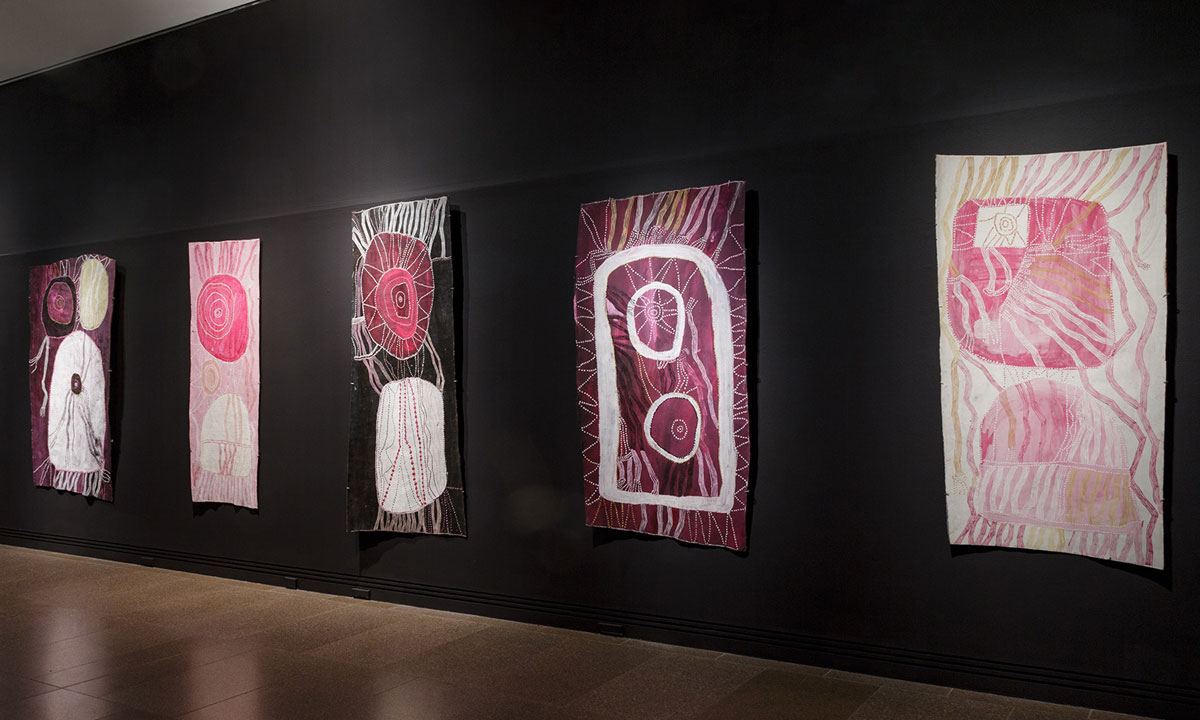 An installation view of Tarnanthi at the AGSA, featuring works by Noŋgirrŋa Marawili. Photo: Saul Steed

Also not to be missed in the lower galleries is an installation by Wukun Wanambi featuring seven large larrakitj (memorial poles) covered with thousands of intricately painted sea mullet and accompanied by the projection of schools of fish on the ground that swirl around visitors’ feet as they walk around the poles.

In addition to the work on show at the AGSA, there are also exhibitions at numerous partner galleries across the city and state, including:

JamFactory: One of five Tarnanthi exhibitions on show at JamFactory is Walka Waru: Ninuku Kalawatjanga ungu painta (Warm Works: Ninuku Painting Inside Glass, until November 12), a collaborative project in which the artists of Ninuku, the most remote arts centre in the APY Lands, have moved beyond the canvas to painting enamel on glass. Read more about the project in this SALIFE story.

ACE Open: No Black Seas (until December 7) is a specially commissioned exhibition of new works by artists from Ceduna which explores their cultural and personal connections with the Great Australian Bight and the impact that drilling for oil (as proposed by Norwegian company Equinor) would have on the country and community.

Murray Bridge Regional Gallery: Initiated by young men from the APY Lands, Weapons for the Solder: Protecting Country, Culture and Family (until November 3) presents diverse perspectives on the struggle for survival, with works by both Aboriginal and non-Aboriginal artists including Vincent Namatjira, Tony Albert, Shaun Gladwell and Ben Quilty.

For details of the Tarnanthi Festival opening weekend events, including the art fair and artist talks, see the Art Gallery of SA website. More information about all exhibitions can be found here.