Director Joseph Mitchell says that like Lewis Carroll, the State Opera of South Australia production of Boojum! has many layers.

“On one level there is the kind of crazy nonsense and absurd nature for which Lewis Carroll is famous,” Mitchell tells InDaily.

“But navigate through what I think is surface nonsense and crazy shenanigans that takes place throughout the opera, and you’ll see glimpses of insight into the man himself.”

Boojum! is an opera and music comedy hybrid based on Carroll’s nonsense poem, The Hunting of the Snark. It was written by Adelaide-born brothers Martin and Peter Wesley-Smith and had its premiere at the 1986 Adelaide Festival, with State Opera resurrecting the work as part of its “Lost Operas of Oz” series.

The new production will be presented at the Dunstan Playhouse this Friday and Saturday with three musicians, a cast of 27 actors and singers, and a chorus comprising members of State Opera’s Winter School.

Mitchell says it explores how Reverend Charles Dodgson (the real name of Lewis Carroll) grapples with the persona he’s created and an entire fictional universe that came with it. Dodgson is played by actor Adam Goodburn, while his alter ego Carroll is portrayed by Brock Roberts.

“On one level the overarching plot at first glance would be some sort of re-creation of the poem The Hunting of the Snark, where a band of misfits – with titles all starting with b: a butcher, a baker, a barrister, a billiard maker, a beaver – talk about their ambition to go hunting for a Snark [a fictional beast of which the Boojum is a particular variety],” Mitchell says.

“However, the other narrative that is running simultaneously to this… is Charles Dodgson.

“We look at the characters who appear on stage, and look a bit beneath the surface, and what we start to see is Charles Dodgson himself looking back at some of the characters he created over the course of his life.”

Dodgson was a British reverend and mathematics teacher who published literary works including Alice’s Adventures in Wonderland and Through the Looking-Glass under the pen name Lewis Carroll.

Mitchell says Boojum! sees Dodgson contemplate his identity as a personified Carroll appears, along with the characters from within his worlds, including those from the Alice in Wonderland series. The plot also examines the relationship between Dodgson and the real girl who inspired the character of Alice, Alice Liddell.

“Alice Liddell was only an 11-year-old girl and Charles Dodgson, as a reverend and teacher, spent many, many years in her company.” 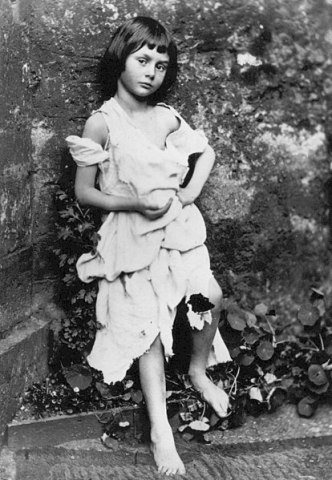 Alice Liddell photographed by Charles Dodgson (aka Lewis Carroll), originally published in the book The Life and Letters of Lewis Carroll in 1898. Source: Wikimedia Commons

Dodgson was also a prolific photographer whose work included many portraits of children, something that has provoked debate in more recent years about his motivations.

Mitchell says Dodgson seemed to be an “eternal child himself”.

“There’s a roundabout, there’s a fort with a ladder that you can climb over, there’s little patches of grass with flowers, and benches are scattered around the set,” says Mitchell.

An elevated cubby house sits in the corner so Dodgson can retreat to create his universe.

Romaniuk also designed the costumes of Boojum! to be timeless and to parallel the universality of Dodgson’s themes and stories.

“He [Dodgson] really removes time and place from the context of his stories, as he goes for the fantastical, the nonsense, and I think he pokes around some of the absurdities of life,” says Mitchell.

“Lewis Carroll is presented on stage as a second character who is immortal. He’s a pen name that will live on forever.”

Boojum! will be performed at the Dunstan Playhouse this Friday and Saturday (July 5 and 6). State Opera’s Lost Operas of Oz series aims to showcase the works of national operas directed, designed, conducted and performed by Australians.