Look at Naomi Hunter’s Instagram and you could mistake it for the social media page of a hospital or scientific research facility. theglasshunter is full of organs made from glass and clay polymer materials, some of which are so realistic they make the viewer do a double take.

Hunter ­– who is currently a SALA artist in residence at the South Australian Health and Medical Research Institute (SAHMRI) and will hold an exhibition there during the festival in August – readily admits she is obsessed with the body and its inner workings.

“We all have a body and we understand that there’s stuff going on inside but we never actually see what it is,” she says. “We feel it but we don’t ever really see our internal structure.”

She describes glass as a “beautiful, tactile medium” to work with, and says she first saw it through an artistic lens after dissatisfaction with her profession prompted her to return to study.

“I had a career for 20 years in insurance brokerage and I decided to go a management degree because I was really interested in the arts,” Hunter says, laughing.

“Halfway through that management degree I did a couple of electives in the visual arts course and was really attracted to glass-making.”

The material resonated with her because of the dichotomy of it being a both a solid and a liquid.

“It’s fragile, but with scientific glass I can make my structures really strong.” 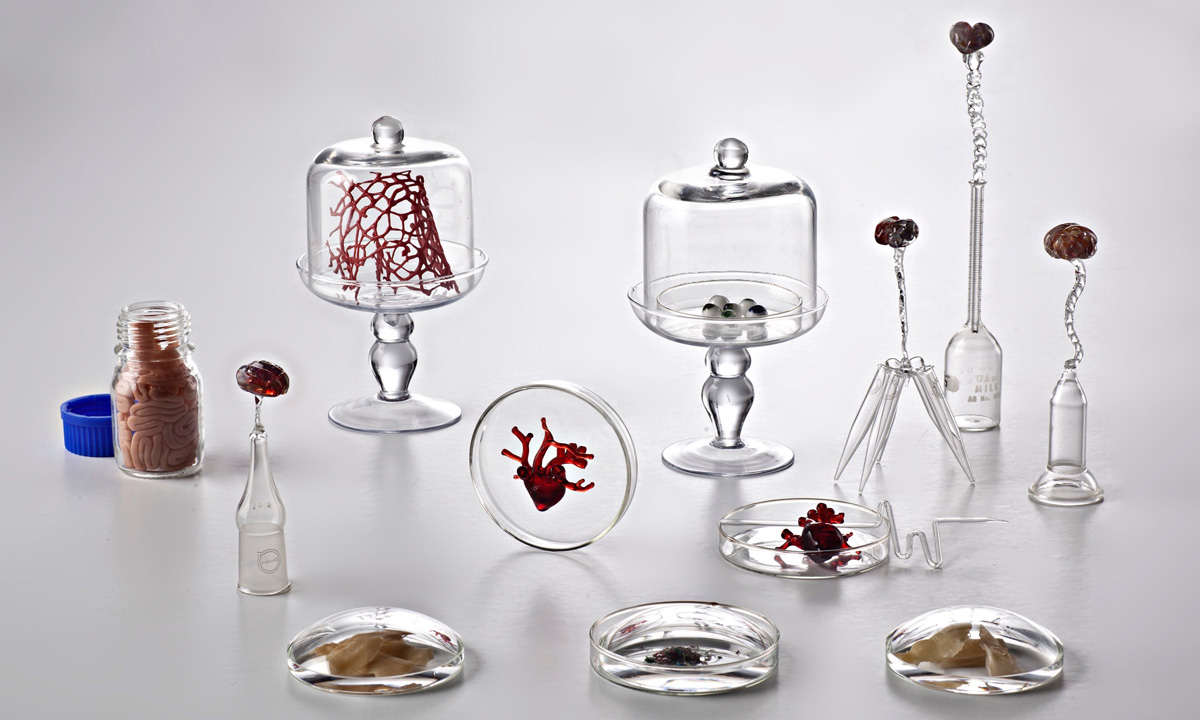 Hunter’s latest work is centred on the sturdy glass borosilicate (widely used in laboratory equipment), which she says she selected because it can be pulled into place organically and “grown”.

“I’ll put a spine on it and a brain on the spine; it’ll look like it’s actually coming out of it. Sometimes I work with polymer clay, which is really low firing, and I’ll manipulate that and create a vessel with it and fire it.”

Hunter says her practice became tethered to the conceptual theme of the body while she was completing her PhD in glass at the University of South Australia.

“After this course, at UniSA, it became more and more apparent that I was interested in the idea of the space between our experiences of the body, and the scientific understanding of the body.”

One month into her six-month residency at SAHMRI, Hunter says she is creating art alongside scientists as they investigate different parts of the body and is sometimes inspired by their findings.

“I’ve been talking to the neurologists at SAHMRI who are actually growing brain cells,” she says.

“It’s really interesting – that synergy between ideas and what’s actually happening in the scientific world.”

Hunter’s father has Parkinson’s disease and her mother has Alzheimer’s, which is partly why she gravitated to the Mind and Brain department at SAHMRI.

“Soon I’ll be working with the scientist Tim Sargeant, who works with Alzheimer’s, which should be interesting.

“But even more interesting is that I first started working with the body before Mum was diagnosed, when we only suspected that she had Alzheimer’s.

“I guess I’ve always been fascinated with the human body, whether it was with wearable art, so through clothing and jewellery, or actually understanding our ideas around the body.”

Some of the work she produces during her residency will be shown in an exhibition at SAHMRI during the SALA Festival in August this year.

Instead of glass-blown organs, however, the collection will comprise a series of drawings of brains on glass.

“I’ve been engraving optical lenses that are no longer used,” she says.

“I’ve been drawing on them with a dremel and then I’ve used my imagination about brains and making it look like it’s 3D even when it’s not.”

A record 9000 artists took part in 700 SALA exhibitions across the state last year.

This year’s festival will run from August 1-31, and registrations for participating artists and venues will close at 5pm this Monday, May 13. New festival CEO Kate Moskwa encourages any artists and venues who might be interested in taking part this year, but haven’t yet registered, to get in contact to find out how they can participate (information is available here).

“SALA is a wonderfully inclusive festival and has seen extraordinary growth over the years,” Moskwa says.

“Anywhere can be a SALA venue, including schools, community spaces, office foyers and home studios.

“Some of the more unique venues looking for artists include the Adina Treasury Tunnels, the Ayers House Museum, and the Living Kaurna Cultural Centre plus plenty of cafes, wineries, hotels and libraries.”