CJ, whose play The River won the Senior Award in this year’s State Theatre Company Flinders University Young Playwrights awards, is busy writing while branching into performance and filmmaking.

“At the moment I am taking on as much work as I can in screenwriting and film production, as well as developing my own projects with other emerging Adelaide artists,” he says.

“I adore playwriting and I hope to keep writing for theatre well into the future. At the same time, I have always held a great love for film and television, and I love the format’s endless possibilities.”

His ultimate goal is to work in television.

“My goal is to have developed and produced a few of my own television shows over the next 20 to 30 years.”

CJ’s  fiction and poetry has appeared in InDaily and Vaein Zine, and he has read and performed at Speakeasy and The Hearth.

He completed his Honours in Creative Arts (Creative Writing) at Flinders University in 2015. During the third year of his degree and Honours, he also attended Oxford University’s Creative Writing Summer School, and travelled to Guangzhou, China as part of the AsiaBound project to mentor creative writing students at Sun Yat-sen University. 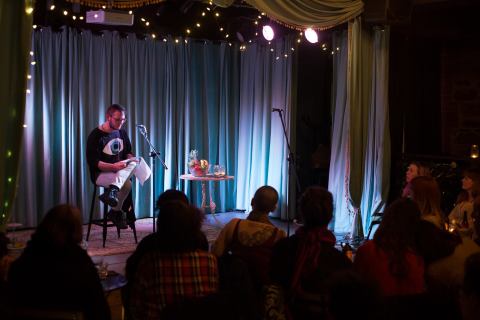 In 2015, he was nominated in the Express Media Awards for Best Piece Published in Buzzcuts, and he has received two Commendations from the State Theatre Company in the Young Playwrights Award.

He was mentored by Adelaide-based playwright Nicki Bloom in the Australian Theatre for Young People’s (ATYP) Fresh Ink Mentoring Program and developed a seven-minute monologue, Changing Room, at ATYP’s National Studio, which was later selected for The Voices Project 2016.

Changing Room was reworked and broadcast on ABC Radio National’s Pocketdocs program in late 2016, and published by Currency Press in an anthology of the same name.

While working at local community broadcaster Channel 44, he’s currently looking to start a playwriting workshop while also producing a documentary about The Hearth, a literary reading event started last year by Flinders postgraduates.

“Last year, I did a reading at The Hearth, and afterwards a friend of mine told me all my writing revolved around ‘thwarted love,’ ” he says.

“I was resistant against this at first, but I’ve come to realise that it actually sums up my work pretty perfectly.

“My work seems to deal exclusively with love, fate, queerness and identity.

“The River plays with all of these themes—it is essentially a play about the mourning of potential, told from the perspective of an imagined romance, and a sense of what could have been.”

High school student Jack Cummins joined CJ as a 2017 winner of the Flinders University Young Playwrights Award, State Theatre Company’s major award for the encouragement and support of new writing talent. Now in its 17th year, the award consists of the Senior and Junior awards.

As the senior Young Playwrights Award winner, CJ received $1,000 cash prize; a four-play subscription; and script development with STC dramaturg and director Sarah Dunn and cast which culminated in a public reading of his work by actors Annabel Matheson and Matilda Bailey in the Dunstan Playhouse last month.