The 17-minute work – currently showing at the Art Gallery of South Australia (AGSA) and in the Australian Centre for Moving Image (ACMI) in Melbourne – showcases innovative excellence in virtual reality and 360-degree panoramic photography, combined with computer animation and an ultra-dynamic soundscape.

Set in the Western Desert, it contains elements of the disaster movie, the travelogue and the nature story, and represents the uniquely personal vision of Nyarri.

Born in the desert near Maralinga, he also witnessed the 1960s Blue Streak Rocket tests. As a child, Nyarri was taken to the Jigalong mission, and is now a painter (and expert horseman) of the Martu people, who reclaimed their land in the 1970s in a legal and ethical stand against uranium mining.

Collisions is clearly conceived and imagined by an artist at her peak and an indigenous collaborator with a powerful message. Their vision is engineered by innovation experts and delivered with uber-realism and total immersion; the real world disappears. “Awesome” is the appropriate adjective.

In this magical, mediated “place”, we exist so real and yet so virtual. We are in the earliest phase of VR evolution and, so far, virtual environments are often clunky versions of the “uncanny valley”.

Enter the immersive theatre at ACMI or the vestibule space at the AGSA, slip on your headgear and grab a comfy swivel chair – your vehicle for the experience. You arrive in Nyarri’s home turf by air. Get into the act: you are the camera, can glide around, crane up and down and lean into this world.

You find points of access inside a seamless image apparently your own creation (there is no screen) that replaces your “real” environment with a new, temporary or virtual reality – the Western Desert.

Science-fiction hit movie The Matrix reminds us that virtual reality has a loose relationship with “truth” and can be used to trick us. This ultra-crisp VR immersion allows inspection of several gorgeous landscapes from all angles. We are at liberty to roam within the scope allowed by 360-degree cameras airborne by drones.

The rig is driven by proprietary software from Visual Playgrond paired with Oculus Rift headsets and top-shelf headphones. The image is all happening inside the headset, triggered by a master computer. Headsets on, we are THERE, in the matrix as it were.

THERE as we “fly” above a convoy of trucks entering Martu country. We receive our welcome to the land by Nyarri and his grandson Curtis and are THERE by the hill that they are protecting; a hill that holds uranium. After seeing the Maralinga and Blue Streak Rocket tests, Nyarri is sure this spirit should not be unleashed upon a land better served by custodians who will prevent disaster.

We are THERE in his space; his home, his paintings of mushroom clouds. THERE with his family as they tend the land “painting with fire” in a controlled burn-off to prevent wildfire and encourage new growth. A powerful metaphor indeed. 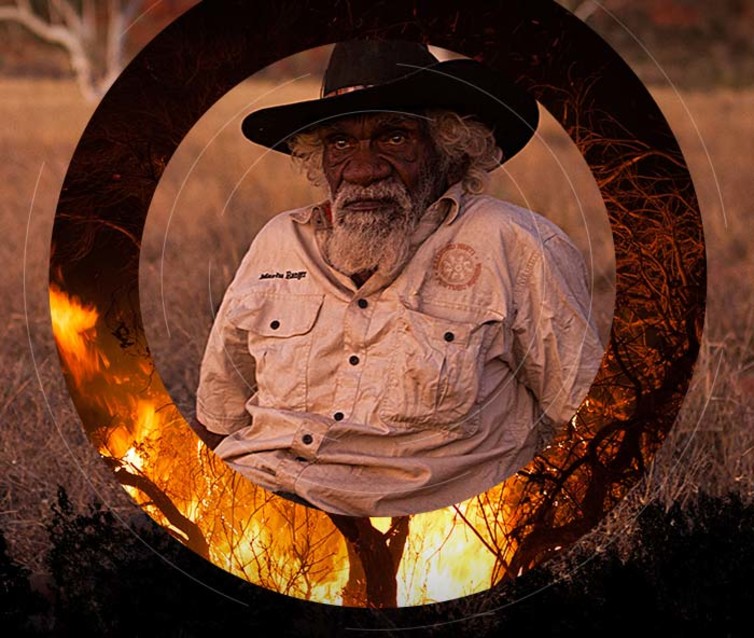 The soundtrack, engineered by Lucas Films Skywalk studio, provides a tantalising surround-soundscape that leads us further into the image, around corners of discovery to follow the giggles of children, red dogs, birds and the wind – I swivel around and crane my head to discover unique moments and angles within the larger vision. I tilt my head to discover the moon above by surprise.

Every audience member literally sees a different version of events and there is no way you can cover the full 360 degrees of panoramic possibility; it’s an infinite feast of imagery and locations. The detail is exquisite. I reach out to touch the rocks, every one of which is “known” to Aboriginal caretakers.

A dramatic highpoint occurs as we are caught in a nuclear explosion. Somehow kids will love this animated scene; kept “safe” amid destructive, cosmic splendour and reassured by the gently confident narration of our witness, Nyarri.

This brilliant showcase is the brainchild of Australian Artist X and was produced by US-based producer Nicole Newnham, with support from the Sundance Institute. This is the third of Wallworth’s works located in the desert heart of their community. The artist is invited back because she offers a respectful “deep listening” approach to the messages therein. Her beautiful aesthetics and technical virtuosity invite us to absorb the heartfelt legal and ethical stand that the Martu people make against uranium mining.

Wallworth has shown at the World Economic Forum, Davos, the Lincoln Centre for the Performing Arts, The American Museum of Natural History, the Australian Centre for Contemporary Art and so on. Her affinity with scientific projects ignites our appetite for spectacle and colour while grounding us in information that raises new questions, new ideas.

Kudos to all those organisations that have supported this breakthrough work which marries the emergent tools of virtual reality with new perspectives on Australian cosmology, art, landcare and human rights.

The Adelaide Film Festival and Art Gallery of South Australia are presenting Collisions at the gallery until October 30. The work is also being shown at the Australian Centre for Moving Image until January 15, and at the Sydney Opera House on October 8 and 9.

Lisa Dethridge is co-ordinator of Masters of Media Professional Research Game Design Research at RMIT University. This article was first published on The Conversation.