The national awards recognise excellence across all the performing arts and were presented at the Sydney Lyric Theatre.

Also in the dance category, Adelaide-born Frances Rings won a choreography award for Bangarra Dance Theatre’s Sheoak, which took out a total of three gongs (former composer David Page – who died in April – had also been posthumously nominated for his work). 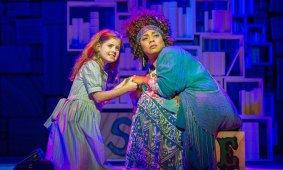 Among the other South Australian nominees in the 2016 awards was Slingsby theatre company’s The Young King, in the Best Presentation for Children category, which was won by Barking Gecko Theatre Company’s Bambert’s Book of Lost Stories.

Composer and lyricist Tim Minchin’s Matilda the Musical made a record sweep of this year’s gongs, taking out all 13 of its nominated categories including Best Musical, as well as acting, costume and design awards.

Minchin’s witty musical adaptation of Roald Dahl’s classic children’s novel has previously found success on London’s West End and Broadway, and debuted in Sydney last year. It was announced last month that the musical will come to Adelaide for an eight-week season from May next year.