The play, which premiered at the 2016 Adelaide Festival, is vying for the Best Presentation for Children gong in the prestigious national awards, which celebrate Australia’s live performance industry.

Slingsby is one of several small and medium South Australian companies that received no four-year funding from the Australia Council in its latest round – a decision that has put its future in doubt. It has been forced to launch a crowdfunding campaign to help it tour The Young King and undertake new work.

“It’s great to have this national recognition for the company and it reinforces how disappointing the funding decision was earlier in the year.

“It’s great to be acknowledged in this way.

Matilda The Musical, written by Australian Tim Minchin, dominates the 2016 Helpmann Awards with a total of 13 nominations, including for Best Musical and Best Original Score.

Douglas McNicol is nominated for Best Male Performer in a Supporting Role in an Opera for his performance in State Opera SA’s Don Giovanni, while actors Colin Friels and Catherine McClements are vying for awards for their roles in two State Theatre Company of SA co-productions, Mortido and The Events, respectively. WOMADelaide is also once again nominated for Best Contemporary Music Festival.

“This year has been a remarkable year for live performances in Australia reflecting a vibrant industry with more than 18 million people attending shows across the country and ticket revenues of $1.5 billion,” Live Performance Australia chief executive Evelyn Richardson said.

High-profile nominees include actors Cate Blanchett and Richard Roxburgh, for their roles in Sydney Theatre Company’s The Present. 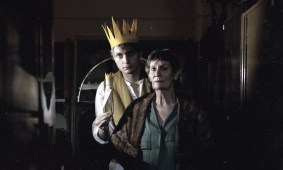 Slingsby theatre: After the chop

Winners of the 2016 Helpmann Awards will be announced on July 25 at a ceremony in Sydney.