Theatre director Chris Drummond was hooked by the creative possibilities of Patrick White’s Down at the Dump the first time he read the short story.

“At the end I felt like I had been through an incredible emotional experience,” he says.

“Not much happens in the plot … but this exquisite little jewel of a story deals with the biggest ideas.”

The artistic director of Adelaide’s Brink Productions immediately found himself thinking about the tale – which centres on two families who live across the road from each other in a fictional Sydney suburb – as a piece of theatre.

There was just one big question:

“How the hell do you turn this into a show when it’s a piece of prose, not a piece of drama?”

Drummond’s solution was to eschew the traditional approach to adaptation and instead take on White’s 1957 text “holus bolus” in a word-for-word production that takes its name, The Aspirations of Daise Morrow, from one of his favourite lines in the story. 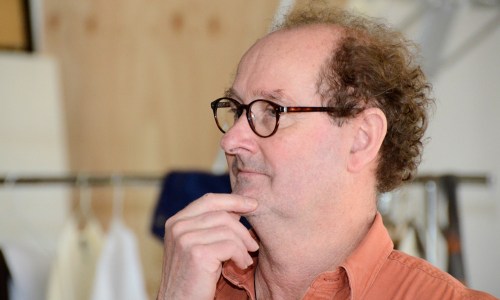 Each of the cast members – Blackwell, Quade and emerging Adelaide actors James Smith and Lucy Lehmann – will play three or four characters and also share the narration in the show, which opens on October 10 in the Space Theatre. Live music by The Zephyr Quartet will help to mark shifts in time and location.

It makes for tough rehearsals – “today we spent three hours on eight lines of dialogue” – but Drummond says the advantage of the approach is that it retains the magic of the author’s imagery and language.

The Aspirations of Daise Morrow is a timely production, with this year marking the 25th anniversary of White’s death.

Drummond says White wrote Down at the Dump right before the counter-culture revolution, when he was suffocating in the claustrophobia of a conservative Australia.

Part of his collection The Burnt Ones, it centres on the activities of two families over one afternoon: the Whalleys have decided to spend the day at the Sarsparilla dump, while neighbours the Hogbens are attending the funeral of Mrs Hogben’s sister, “the scandalous Daise Morrow”. The forbidden attraction between young Meg Hogben and Lummy Whalley has seen the tale described as a modern-day Romeo and Juliet.

It explores themes such as the complexity of small communities and fear of the unknown and outsiders, as well as the desire for a better future.

“We constantly live our lives hoping that tomorrow will be better than today but there’s always that fear … so there’s this tension between fear and aspiration,” Drummond says.

The story is also brutally funny: “There is humour to it … an achingly funny dart that goes straight to our human foibles.”

Brink is taking an unusual approach to staging the work. All the seating will be removed from the Space Theatre so that the audience sits within a kind of installation or dreamscape while the actors and musicians move among them.

“It’s a real meeting point between art as installation, pure storytelling and then the music with the quartet,” Drummond says.

“We think it will be quite a different experience for an audience, and really alive – not a literary, heavy-going thing at all.

“Everything we are doing is about immediacy and raw human contact and humour and emotion … that counters the complexity of it. There’s the richness of his [White’s] language, but it’s really understandable.”

Brink has built a reputation for innovative theatre, including Thursday, a co-production with English Touring Theatre inspired by the story of London bombing survivor Gill Hicks, and multi-award-winning show When the Rain Stops Falling.

However, after eight years of constantly creating new work, Drummond says the small company deliberately took last year off to recharge the batteries.

Now, it is full steam ahead, with a number of productions planned for the next few years, including a co-production with State Theatre Company in 2016 of Moliere’s Tartuffe, adapted by Philip Kavanagh.

“I think it will be an exciting time ahead.”

The Aspirations of Daise Morrow will be presented by Brink Productions, in association with the Adelaide Festival Centre, at the Space Theatre from October 10-24.