“Nothing daunted these intrepid fighters: to them, nothing was impossible” – Field Marshall Sir Edmund Allenby, referring to New Zealand soldiers in World War 1

A lone drummer rolls out his call-to-arms, a veil lifts, a memory floats over the stage before the assault begins. Spurred on by the rousing music of the Kensington and Norwood Brass Band, New Zealand choreographer Shona McCullagh’s dance-theatre work is a revelation of the horrors of war: laboured breathing through a gas mask underscores death in the trenches. 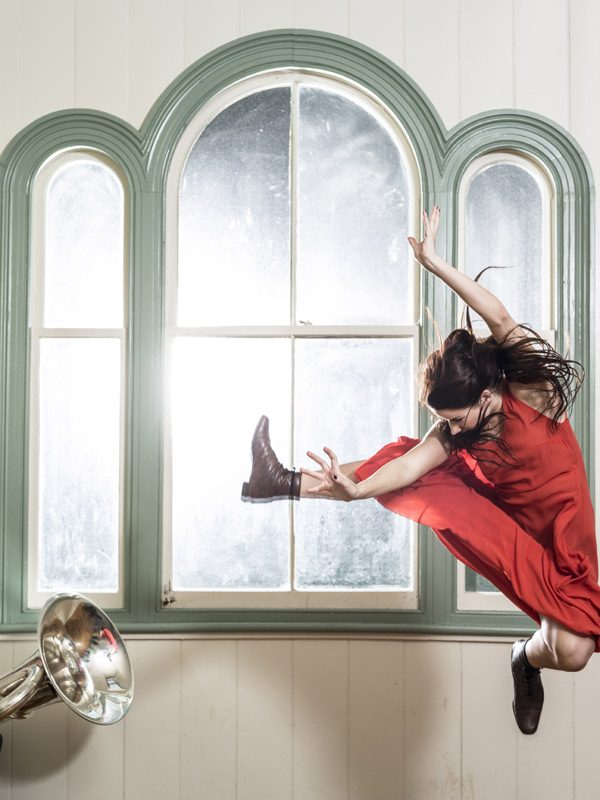 McCullagh is an award-winning, cross-platform artist who has previously worked with the Darc Swan and Limbs dance companies, and was a founding member of the Douglas Wright Dance Company. In 2002, she became a New Zealand Arts Foundation Laureate. She has been workshopping Rotunda since 2013, and the result is an exhilarating performance that is not only accessible to non-dance audiences, but also a fitting tribute to the Anzac spirit.

The unique culture of the New Zealand Army has been shaped and defined by both the military traditions of the British soldier and the Maori warrior, and we see both emerging throughout the piece, with the beauty of the choreography of violence and community violating the senses.

The ceremonial mace carried by the band leader becomes a weapon in the hands of the four male dancers, and the innocence of youth approaching an unknown conflict soon turns to desolation and despair. Women wail across the mire, lyrical and poignant in their poppy-red dresses. A man and his dead mate execute one of the most moving pas de deux of the performance.

With a score arranged by Don McGlashan, weaving traditional hymns with works by composers John Ritchie, Alex Lithgow and Gareth Farr to conjure the emotional landscape of a seminal time in the nation’s history, this Australian premiere gives South Australian audiences the opportunity to see the New Zealand Dance Company at its finest.

Congratulations must be extended to McCullagh on her courage to leap from the trenches, deliberately stepping away from the obscure, at-times self-indulgent, trends many contemporary dance companies appear to embrace, instead delivering a compelling account of a country devastated by war.

The New Zealand Dance Company, with the Kensington and Norwood Brass Band, presented Rotunda at Her Majesty’s Theatre on May 1 and 2 as part of a national tour.