“Please God, help me to remember.” A man pleads, begging for clarity. His recollections – told and retold – change shape as he attempts to recall what happened to his children. Are these memories or fairytales?

Someone has a fatal disease but it seems a cure may be developed. Experiments are performed, experiments on children … maybe in his home … maybe next door. Who could do such a thing? Could you numb your feelings enough to take that step? Cut out your heart and put it aside if it was for the greater good? 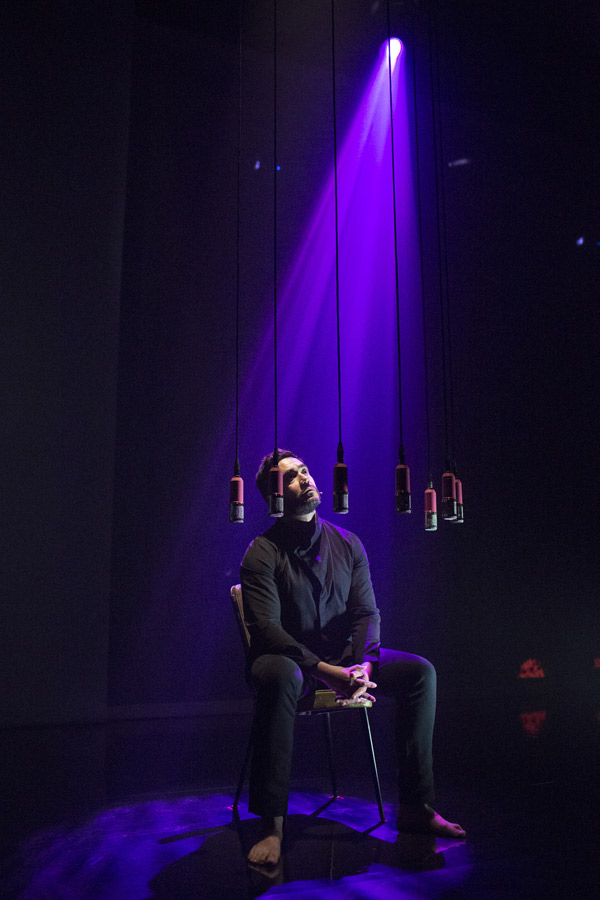 It’s a dark, disjointed, poetic narrative. There are references to disturbing studies inflicted on twins. Other voices join in. Disembodied heads projected across the stage contradict the man, adding new, conflicting threads to the story. What is right and what is wrong?

This work seems most successful as a music performance. As an orator, Carrasco lacks life, but there’s no denying his talent as a guitarist. He moves away from the microphone to play several compositions, including an unusual piece on an electric guitar inside a display case, using a plastic ruler and a sponge to create almost painful effects. A pulsing electronic soundscape contributes another subtle layer, along with a discordant closing composition from a strange, twin-guitar creature suspended from the ceiling.

There’s a lot to look at, but does it add up to a cohesive experience?

The Experiment does its best to invoke an unsettling and disturbing mood but I’m not sure it hits the mark. It’s quite beautiful at times, with images quietly floating on a series of sheer screens, but despite being visually and aurally intriguing, it’s never fully engaging.

The scenario on which the show is built – inflicting suffering on one group of human beings for the benefit of another – is presented and repeated, but not taken any further. In this respect the work fails to explore the ethical issues in any depth. How did this experiment leave me? Interested but unmoved.

The Experiment is being presented in the Space Theatre at the Adelaide Festival Centre until March 14.