Graceful in its ease and poetic in its narrative, The Lie adds another emotively resonant tome to Helen Dunmore’s noteworthy body of work.

The prose mesmerises and is as electrifying as that of her earlier books The Siege or A Spell of Winter.  Indeed, this new novel is, if anything, even superior and, featuring a tormented young man who has recently returned from the Great War, it couldn’t be more timely.

With this year marking the centenary of the outbreak of World War I, many books are being published about the “war to end all wars”, but it is doubtful any will compare to Dunmore’s spellbinding and haunting novel.  It evokes war in all its horror and sordidness, and the torment of young men returning to England’s green and pleasant land.

From time to time, a novel comes along that is so innate, so removed from imitation, so atmospherically brilliant, that it delights and hones the mind. The Lie is one of those exquisite and irresistibly compelling novels. It is meticulous, emblematic and richly redolent of a time and place, with a distressed man who has lost his innocence, youth and the love of his life. 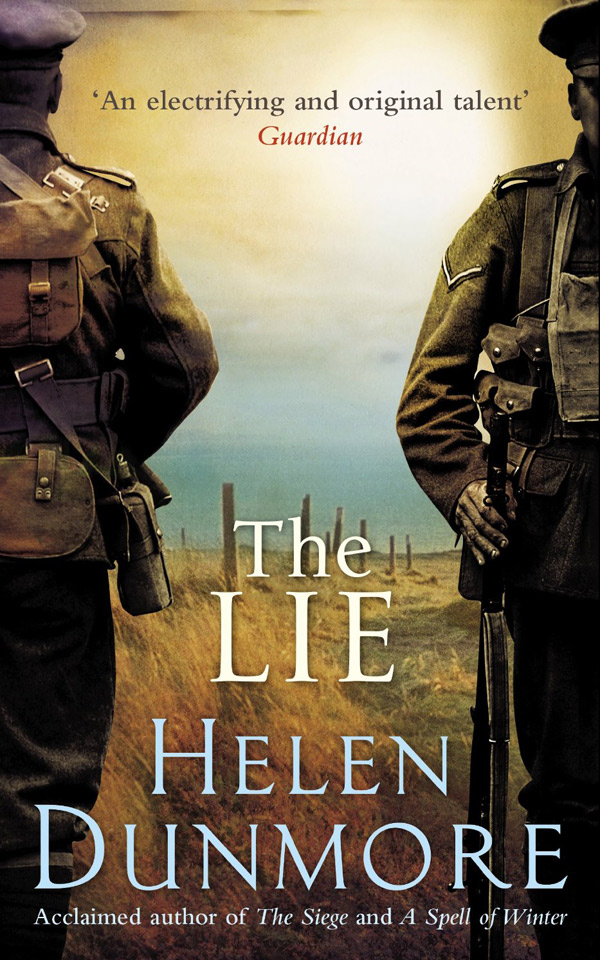 Set during and just after World War I, the tale is haunting. Daniel Branwell has returned from the trenches. During the conflict, he witnessed the death of his best friend, Frederick Dennis, and he is visited nearly every night his ghost.

Without family – his mother died during the war – Daniel is homeless, and Mary Pascoe, an aged, blind loner, allows him to build a crude shelter on her plot of land. Here he scapes a living from her garden. When the old woman is on her death-bed, he promises not to call the doctor.  Later, he buries Mary with dignity on her land.

When others inquire about Mary, he tells them she is too ill to be seen.  Thus begins the falsehood that seeps through his life and torments him as much as his battle-fatigue-induced hallucinations.

The story draws the reader in with mesmerising power to the blood, mud and guts of the trenches, and the tumultuous aftermath when men came home with trauma bigger than their kitbags. Most of these images remain in the mind long after the final page.

Dunmore’s eloquent novel overflows with spirit and colour. It is packed with personal and physical details which evoke the period with startling immediacy and is devastatingly poignant.  Simply sensational.

Helen Dunmore will be a guest at Adelaide Writers’ Week, taking part in a session called The Novelists, with Margaret Drabble, this Sunday (March 2), and a solo session about The Lie on March 6.