The 2014 Adelaide Fringe officially opens tonight, heralding the start of a four-week celebration of arts and culture with a record 966 shows in more than 350 venues throughout the city.

A colourful parade of floats, moving sculptures, artists and a giant “disco cuttlefish” is scheduled to begin at 8.30pm and travel down King William Street from North Terrace to Victoria Square – unless the wet weather interferes. Organisers are hoping the rain will clear, with Fringe-goers advised to check social media and the official website late this afternoon for parade updates.

Either way, the shows will go on, and InDaily’s reviewers have come up with the following Fringe picks to help readers navigate the mind-bogglingly large program. The list is based on what we’ve previously seen and heard, what we want to see, and what we’ve read elsewhere. We’ve included shows both big and small; there’s the musical and magical, the theatrical and comical, the quirky and the sexy.

It’s certainly not an exhaustive list – nor do we offer a satisfaction guarantee – but it will give you an idea where to start, as well as tips for local talent and venues that might otherwise be overlooked in the Mad (February and) March mayhem. 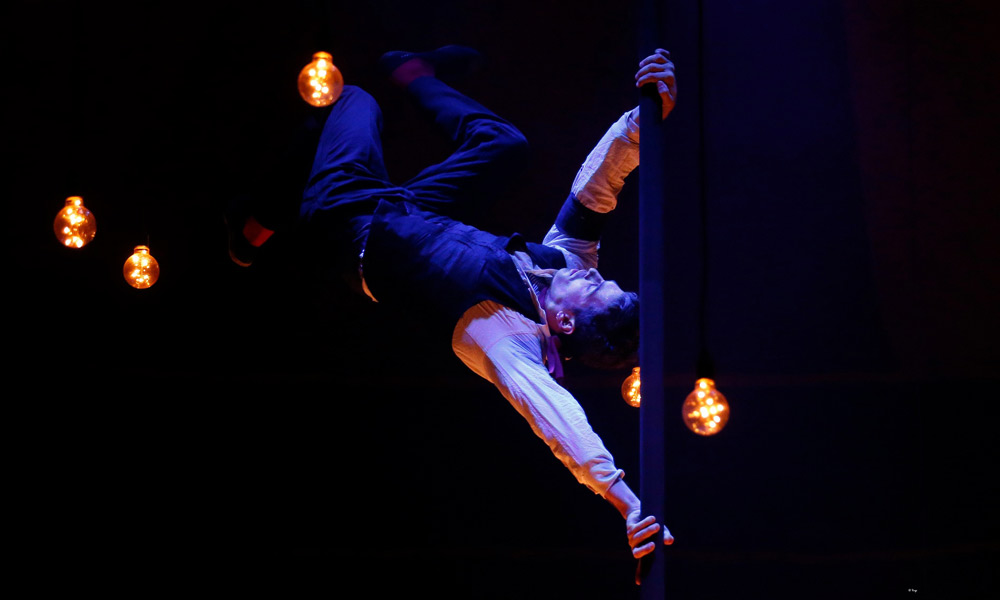 Limbo: After a sell-out season at last year’s Adelaide Fringe, Limbo (above) returns to the Spiegeltent in the Garden of Unearthly Delights, promising to whisk audiences “into a sinister netherworld of jaw-dropping contortion, gut-churning aerial acrobatics, nail-biting stunts and staggering illusions”. We admit we were a bit freaked out by the contortionist last time around, but we still highly recommend this slickly seductive unearthly delight.

A Simple Space: Adelaide-based acrobatics ensemble Gravity and Other Myths won over audiences with their first show Freefall, and last year’s follow-up A Simple Space garnered more four and five-star reviews at both the Adelaide and Edinburgh Fringes. With seven acrobats pushing themselves to the limits and a live percussion soundtrack, it’s well worth checking them out at the Royal Croquet Club’s Panama Club.

Papillon: Created by the same folk who produce the popular Fringe family show Le Petit Circus, Papillon premiered at the Melbourne Fringe last year, with Stage Whispers describing is as “indefatigably cheerful and sexy circus vaudeville”. It will take to the stage late at night in Gluttony (Rymill Park) during the Adelaide Fringe, with balancing acts, plate-spinning and acrobatics, set against a backdrop of “soul-capturing melodies”.

Luminous: Circus in the dark? That’s exactly what’s in store at this 2012 Sydney Fringe award-winning show, which uses glowing UV bodypaint and backlighting to tell stories incorporating acrobatics, juggling and aerial arts. Intrigued? We are. Luminous will be lighting up the stage in Gluttony’s La Petite Grand. 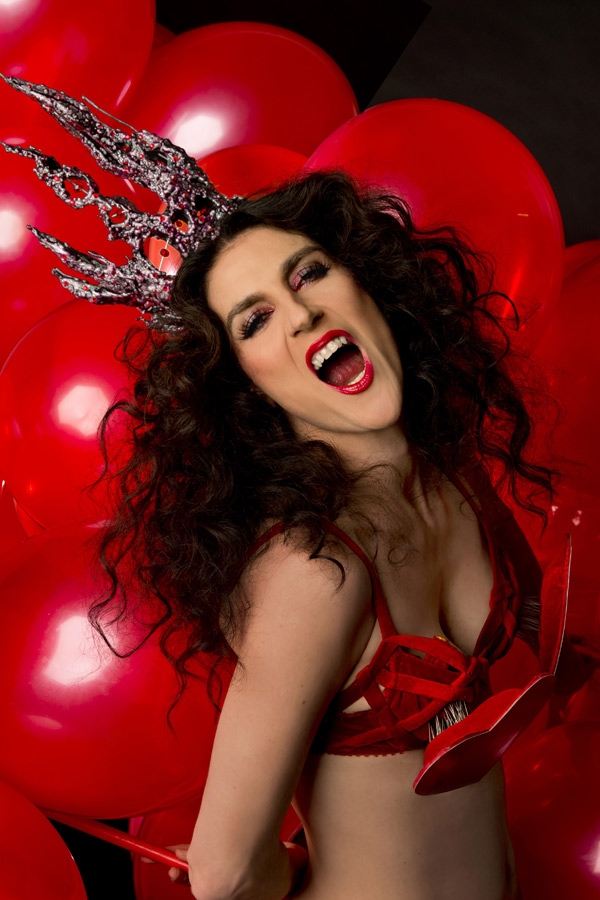 Glory Box: Okay, so they’d already hooked us with the photo (above) of femme fatale performance artist Moira Finucane in red velvet lingerie, but this kinky act destined for the Garden’s Paradiso Spiegeltent also has a swag of five-star reviews to back it up. There will be six-inch heels, strings of pearls, mirror balls, a trapeze and more. Glory be.

Naked Girls Reading in the Garden – You Can’t Spell Literature without T & A: “Who doesn’t want to gaze upon a beautiful woman naked? And who doesn’t like to be read aloud to?” producer Frankie Valentine asked in her recent interview with InDaily. Indeed.

Ripple: This performance at the Nexus Cabaret will showcase the talents of vocal ensemble Voice of Transition, a South Australian group of passionate young singers aged 18-25. This is their fifth Fringe and follows an Adelaide Cabaret Festival performance last year with Kate Ceberano and Teddy Tahu Rhodes. Ripple will traverse a diverse range of styles and songs in “no-holds-barred catalogue of the good, the bad and the unexpected”. 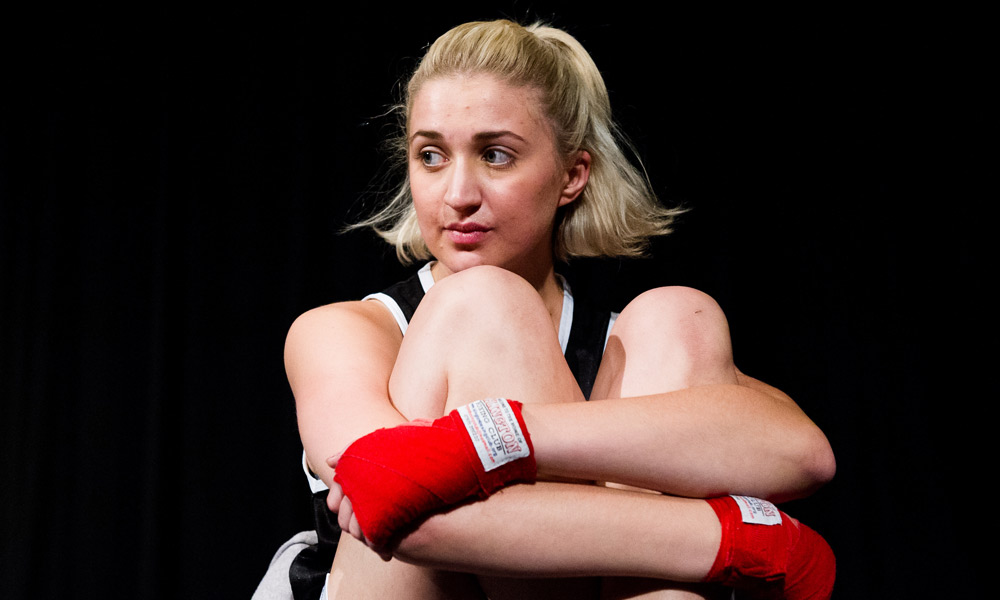 Bitch Boxer: Winner of multiple awards (including the Holden Street Theatres award at the 2013 Edinburgh Fringe), this one-woman play by UK company Snuff Box Theatre centres on a young boxer training for the fight of her life – the 2012 London Olympics. Writer Charlotte Josephine tells InDaily it’s “ballsy, bold and beautiful”, and the critics agree. It’s playing at The Studio, Holden Street Theatres.

I Might Be Edgar Allan Poe: This theatrical gem has had two previous Adelaide seasons (1998 and 2008) and definitely warrants a third. Playing at the Bakehouse Theatre, Dawson Nichols’ convoluted, completely absorbing one-man show is a stunner. Nichols is also performing another solo show, Virtual Solitaire (at The Science Exchange), in which he plays a man “lost in a full-immersion murder-mystery game”.

Albert Einstein – Relativitively Speaking: This promises to be informative as well as a little zany, with a madcap professor taking us through Einstein’s theories and the dilemma of his involvement with creating the atomic bomb. Written and performed by John Hinton, Albert Einstein will be at Holden Street Theatres from February 13 until March 16.

Outback Homosexual Serial Killer: Yes, the name originally caught our attention, but a chat with the show’s creator and performer, Dion Teasdale, convinced us that there’s more to it than a salacious headline. Playing at Salad Days Inc (Gilbert Place) and incorporating live performance, cinematic projections and recorded sound, Outback Homosexual Serial Killer is a wild trip  through Australia’s outback inspired partly by films such as Wolf Creek, Mad Max, and Priscilla Queen of the Desert. 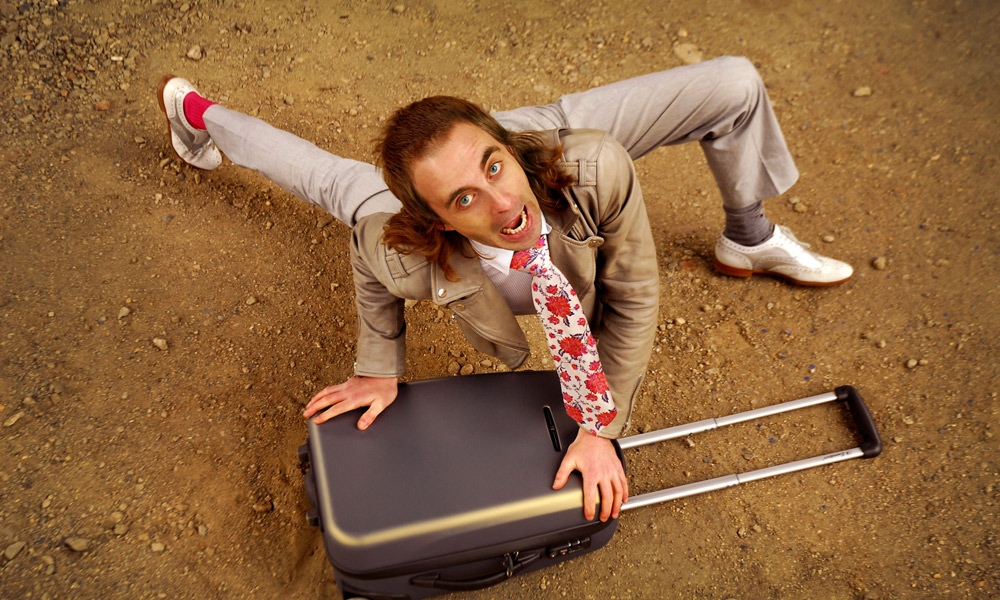 Paul Foot: It was an interview with InDaily that saw UK comedian Paul Foot included in this list. We’re intrigued by his unusual, strange and surreal brand of humour, and charmed by his deadpan delivery. We love a bit of madness and a lot of words, and that’s what Foot’s 2014 Fringe show Words, at Palace Nova, is all about.

Hannah Gadsby – The Exhibitionist: Hannah’s self-deprecating humour always gets plenty of laughs, and she wins over audiences with her candour and warmth. This Fringe she’ll be debuting her new show The Exhibitionist in the Garden of Unearthly Delights’ Idolize Speigeltent.  We still crack up every time we think of last year’s water-slide story …

Wil Anderson: Another Fringe regular who never disappoints, Anderson will be performing his new show WILUMANTI in The Vagabond in the Garden of Unearthly Delights. He may be one of the pricier comedians, but he’s also one of the more politically savvy, professional and genuinely intelligent funnymen.

Demi Lardner: This young Adelaide comedian is kicking goals on the comedy scene, winning the national Raw Comedy competition in 2013, as well as the So You Think You’re Funny national final in the 2013 Edinburgh Fringe. Tickets for her Adelaide Fringe show, Limbless Cagefighter at Horner and Pratt café on East Terrace, are just $13-$18 – cheap laughs indeed. Lardner was also co-writer for last year’s Adelaide Fringe Best Emerging Comedy award-winner Wolf Creek, the Musical, which is returning for a short season in The Producers Bar on Grenfell Street.

The Umbilical Brothers: A KiDs Show not suitable for Children: The very title indicates the sense of fun these two have on stage through physical theatre, comedy, the use of sound effects and technical theatre. They take everyday events and turn them into the extraordinary.  The ages 13-plus KiDs Show will be at the Royalty Theatre.

The Boy with Tape on his Face: MORE TAPE: The InDaily reviewer who nominated this quirky Kiwi comedian for inclusion in our Fringe picks has seen him three times already and can’t wait to see him again in The Vagabond in The Garden of Unearthly Delights this year. “Who knew you could communicate so much with your eyes and that you don’t need to tell jokes to be funny?” she says.

Hans – Like a German: The legs, the feathers, the local lampooning … Adelaide’s Matt Gilbertson is promising two nights of outrageous campy comedy in his Fringe show in the Paradiso Spiegeltent in the Garden of Unearthly Delights.  If you loved the Berlin Cabaret, this one’s for you. 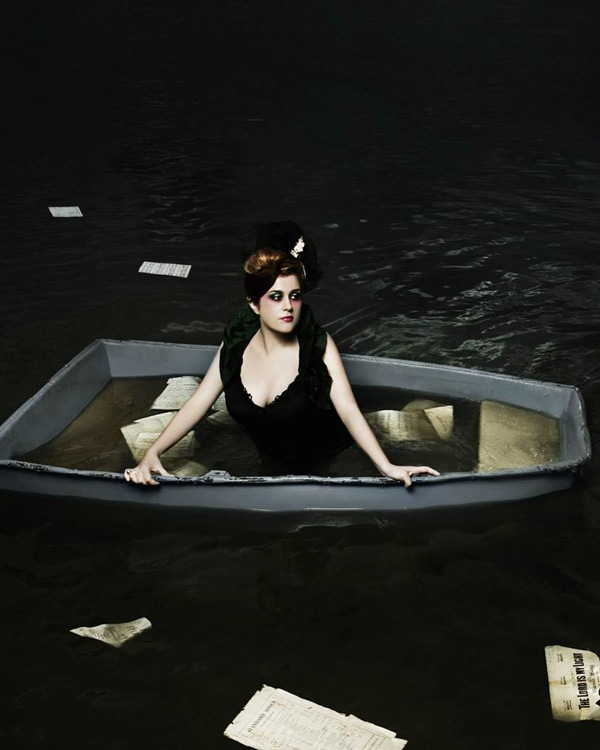 Katie Noonan & Circa: Love-Song-Circus: 2014 Adelaide Fringe Ambassador and multiple ARIA award winner Katie Noonan (above) is teaming up again with circus troupe Circa for a re-staging of Love-Song-Circus in the Paradiso Spiegeltent in the Garden of Unearthly Delights. The acclaimed performance is based on the stories and letters of Australia’s first convict women. Expect to be spellbound.

It’s Not Me, It’s Uke: You’ve gotta love the Wheatsheaf Ukulele Collective, and not just because they’ve nailed the pun. Last year’s show (Uke Want It – Uke Got It) blew us away, with no genre left untapped and covers of everything from  Bananarama’s “Venus” to Metallica’s “Enter Sandman”. Three of their five 2014 Adelaide Fringe gigs at the Wheaty are already sold out, so get in quick.

The Idea of North: Music that promises to warm your heart and feed your soul – who could argue with that? A capella quartet The Idea of North won last year’s Fringe award for best music performance and return in 2014 with three concerts: Ballads by Candlelight, in the gorgeous setting of St Peter’s Cathedral, Up Close & Personal at the Promethean, and a dinner show at the Jacob’s Creek Visitor Centre. Did we mention they’ve just won their second ARIA for Best Jazz Album?

This Could be Big: Dubbed the “Larrikin Troubadour Laureate of Adelaide”, Don Morrison is a stalwart of guitar-based music in Adelaide (The Bodgies!), with an accent on raw but inclusive sounds that will get you moving.  He is also a mean maker of steel-bodied guitars. And he’s playing three Fringe gigs at the Wheatsheaf Hotel in March.

Jamie MacDowell & Tom Thum: Australian beat boxer Tom Thum has won widespread acclaim for his incredible ability to mimic everything from orchestral instruments to the didgeridoo. He wowed us with previous high-energy Fringe show Tom Tom Crew, and is returning this time around with collaborator and guitarist Jamie MacDowell for a more stripped-back gig at La Cascadeur in the Garden of Unearthly Delights. Click here for a taste of what’s in store.

Wine, Women & Song: This one-only show in the Paradiso Spiegeltent at the Garden of Unearthly Delights on March 3 will combine the sumptuous vocals of three powerful female singer-songwriters: ARIA award-winning Tassie songstress Monique Brumby and South Australians Martine Locke and Kelly Menhennett, winner of the songwriting award in last year’s Telstra Road to Discovery. It should be a cracker.

Shake Your Booty – 70s Disco Explosion: It might be daggy, it might be delightful – either way, this one-night-only retro trip at the Norwood Concert Hall on February 22 seems guaranteed to get your boogie on. Backed by a multi-media show, a 12-piece band will be performing disco hits from the likes of Hot Chocolate, the Bee Gees, Donna Summer, Sister Sledge and more. Sounds like cheesey heaven!

Rip, Drag and Ruminate: With a short season of only four sessions over two days, you’ll need to get in quick for a chance to discover new talent from the Adelaide College of the Arts in this 45-minute show offering “gorgeous dance beauty and innovative physical expression”.  There are matinees and evening performances for just $15.

(Compiled with assistance from InDaily’s team of Fringe reviewers)