Steven Childs is the product of his Soldier Settler family’s farming legacy on the West End of Kangaroo Island, sharing the nickname ‘Chillers’ with his father and grandfather at the local footy club where he played and coached.

Ambitious Chillers was an independent boy who happily laboured out in the paddocks or shearing shed and soon bought his own block of land, followed by another, and another.

“I was 22 when I bought Flinders Chase Farm and not long after, my daughters were born,” the now 54-year-old says.

“We worked as hard as we could. Life was just full-on, flat out and I like it like that.

“I liked pioneering stuff that hadn’t been done before.” 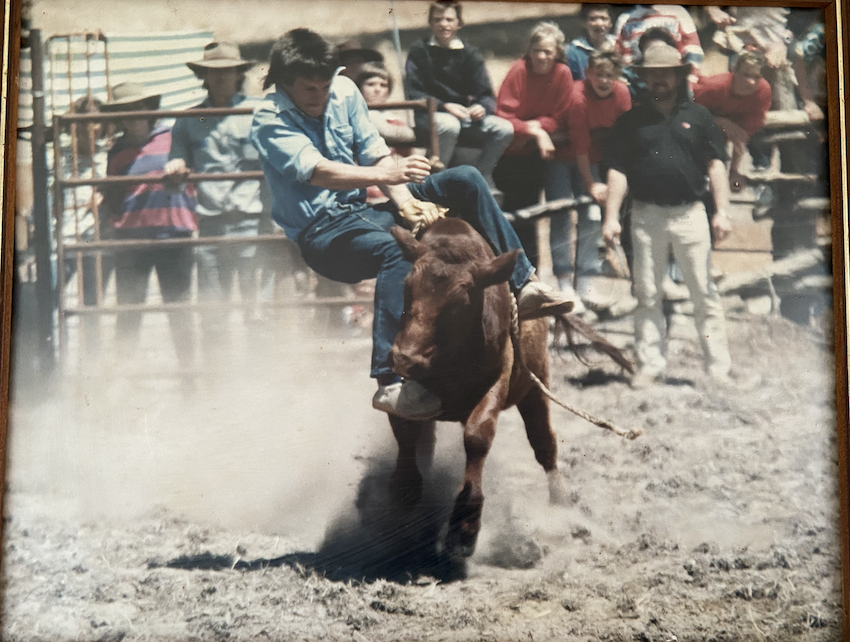 Steven “Chillers” Childs back in the day riding a bull.

Steven went on to create three businesses; apart from his large sheep farm, he started a horticulture operation and a 90-bed accommodation complex suitable for school and backpacking groups all on his land.

“I had plans of creating ‘Chillerville’, a town out the western end of KI to bring families together and have some shops out this way,” he says.

“I was my own boss, running my own life and controlling my destiny.”

Thrill-seeking Steven had a go at bull-riding, loved travelling, skydiving and motorbike riding, and made plans to get his pilot licence just before everything changed in June 2018.

Just after finishing the potato harvest, the worst happened.

“As the car rolled over and I went out the passenger side window, I remember feeling a large crack in my neck,” he says.

After being air-lifted to Adelaide and spending forty days in intensive care, the doctors confirmed his terrible suspicion that he was going to spend the rest of his life in a wheelchair.

Suddenly a quadriplegic, depending on others full time, strong-willed Steven fought back hard – first for his life, then for his independence.

“I wanted to be back on the farm but being bedridden for up to 20 hours a day is pretty tough going,” he admits.

“I knew it was never going to be the same again but I am not one to give up.”

One year after the accident, the West End community came out to celebrate Chillers finally returning to his beloved farm, only for him to lose nearly all of it six months later in the Black Summer fires in January 2020.

“The fire was obviously pretty devastating and damaged everything that I have been working on all my life,” he says.

Steven gets teary-eyed when he remembers the day his community lost so much. Thousands of native and farm animals, 87 homes, hundreds of farm buildings and kilometres of fencing were lost that day, and his land destroyed.

An ambulance arrived on January 3 to pick Steven up just before everything went up in flames – their last chance to get him out. Since most of his carers were either busy defending their own assets or unable to safely travel back to the island, he spent the next few weeks planning his farm rebuild from the hospital – luckily in his expensive high-tech medical bed that the Australian Army made a special dash to save from the flames.

“There’s not a lot of choice. Whether you are a broken man or an able man, you got one choice, you got to fix it,” he says.

Chillers moved into a friend’s cabin 100 kilometres away to coordinate the long clean-up phase. Via telephone and with the help of his medical carers, he instructed farm staff and contractors to make his new vision a reality. Once his new wheelchair-accessible house was finished, Steven finally moved back to the farm seven months after the fires. 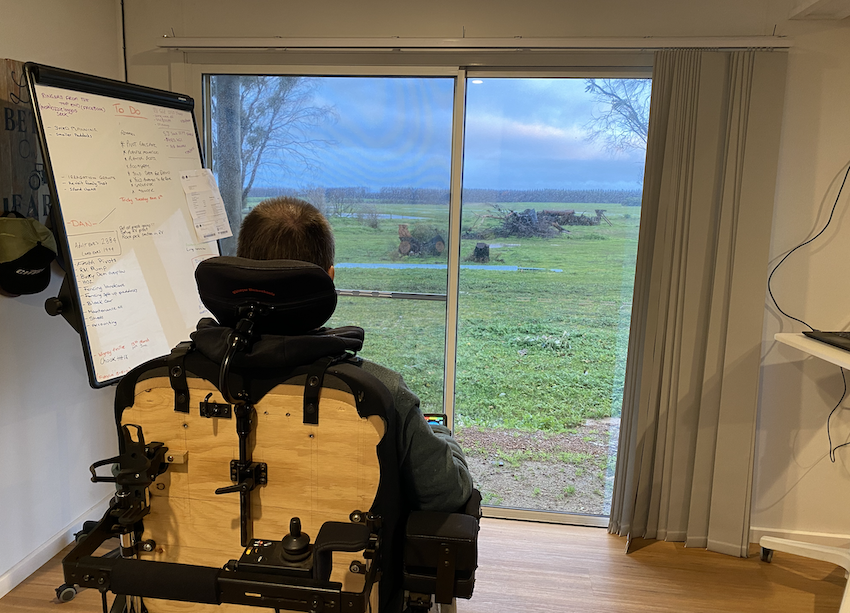 There are many bad days; days of pain and depression, days where things are really hard.

“I try and keep my brain busy; I try and fix problems. All I’ve got left now is my brain,” Steven says.

Hard-working and still ambitious, Steven works with his farm manager from the wheelchair and with the aid of technology, giving as much input as he can.

A hundred kilometres of fencing, an implement shed and burned machinery have been replaced in the 18 months since the second most tragic day in Steven’s life.

“I won’t be able to rebuild everything I had there but I just do things differently,” he says.

“Probably a bit simpler this time.”