About 1000 beehives were lost in the Kangaroo Island fires during the summer of 2019/20 – a quarter of those operated by commercial and semi-commercial honey producers.

Adelaide beekeeper Phil Marshall helped organise the volunteer missions after visiting the Island in February to assist in the bushfire recovery effort.

The first groups visited for two weeks in late June and early July and volunteers will be back building more bee boxes from 10 August.

“I started to talk to beekeepers who had lost equipment and bees, and identified a practical project that we could do,” Marshall said.

“A lot of equipment was covered by insurance or grants, and there was a lot of fire recovery fundraising on the Island, but the actual hands on build-a-bee-box was where the gap seemed to be, in terms of extra hands on deck needed to help build and replace equipment.

“Building boxes is reasonably labour intensive, and of course to comply with KI biosecurity, the best way to do it is build the equipment on the island.”

The two teams of six volunteers, most of whom are members of The Beekeepers’ Society of South Australia, paid their own travel costs and spent a week each assembling flat pack bee boxes in the shed of Peter Davis, owner of Island Beehive.

About 200 of the hives will be managed by Island Beehive, 100 will go to one of Davis’s sons, and 200 will go to another KI family. 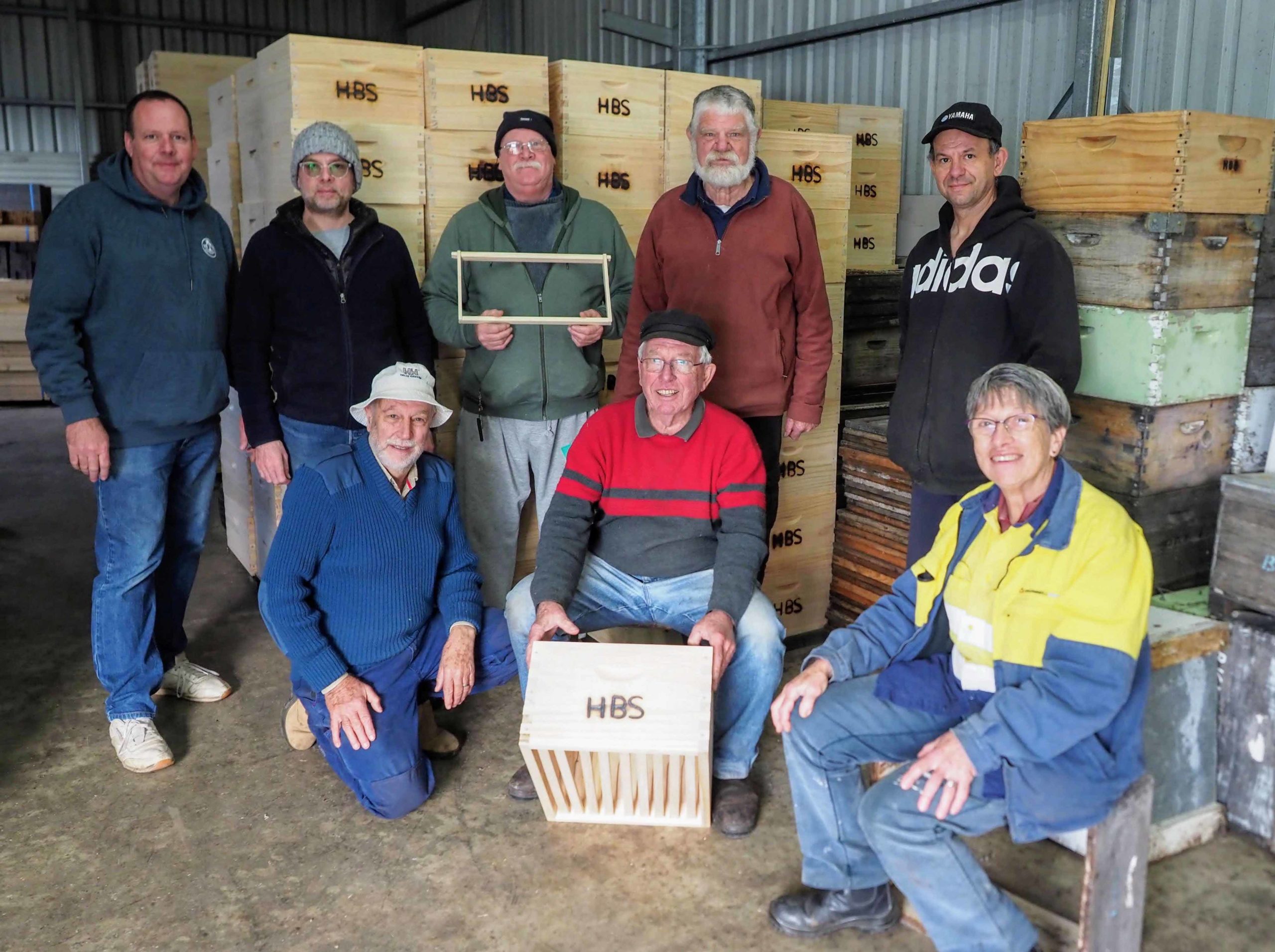 Volunteers with the bee boxes they build in Peter Davis’s shed.

Under the arrangement, the commercial operators pay for the materials and the volunteers provide the labour required to assemble the boxes.

Davis lost 500 hives in the fire just before they were ready to harvest, meaning he also lost about 20 tonnes of honey. He expects it will be up to 10 years before his hives, and his business, have fully recovered.

“That’s because the big trees and the mallees don’t flower for at least seven years and up to 10 years after (they’ve been burned),” Davis said.

“You’ll get some understory plants, but the bees don’t get a lot of honey from the understory. It’s mainly from the big mallees, and sugar gums, and stringybarks.

Davis said he wasn’t at all surprised by the willingness of beekeepers on the mainland to lend a hand.

“I can go anywhere in the world and talk to a beekeeper, whether he’s got one hive or a thousand, and it’s lovely. It’s a lovely industry to be involved in,” Davis said.

“There’s lovely people everywhere in the world that want to come and help people who are in trouble. They get a great experience out of it, you get help, and it’s uplifting.

“The generosity of people is just amazing.”

Anyone wanting to help will have to join the queue – there’s now a waiting list of beekeepers wanting to lend their time and expertise on KI.

The annual Regional Showcase Awards not only celebrate the achievements of individuals, groups, organisations and towns that have made significant contributions to regional South Australia, but also allow the state’s regions to come together at an awards night to acknowledge the collective impact on South Australia.

This year’s awards, which were delayed because of COVID restrictions, were held at O’Leary Walker Wines in Clare on Friday, 26 February 2021.