It’s worked on some of the biggest infrastructure projects in South Australia, including the construction of steel bridge girders for the Darlington Upgrade, a stage within Adelaide’s major North-South Corridor road project.

In 2014 and 2016 Bowhill was also contracted by the Department of Planning, Transport and Infrastructure to construct a series of steel hull ferries for the River Murray vehicular crossings.

Managing director Jeremy Hawkes says together these two projects were a turning point for the business, significantly boosting revenue and workforce numbers.

“Within 12 months we doubled our revenue … admittedly, we were coming off a lower base because the industry was so depressed,” he says.

“It was still a massive jump for us to make in a relatively short period of time and it put a lot of pressure on our existing staff. 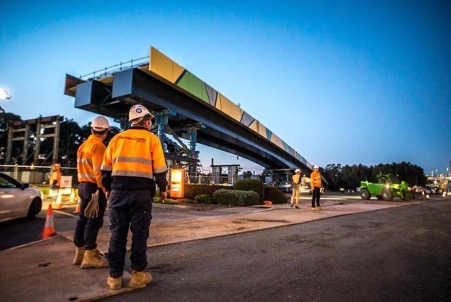 “We had to try and find new staff, get them onboard, skill them up and also make sure they fit in with our unique culture. Now we have a highly skilled and really engaged workforce of 30-plus that I’m really proud of.”

After winning the contract in 2017 for the Darlington Upgrade, Bowhill Engineering constructed the steelwork for two 3000-tonne bridges, built entirely off their permanent site, in what was an Australian first for civil engineering.

Other past projects include the Wayville Pedestrian Bridge in Adelaide’s inner southern suburbs, a complex, three-dimensional bridge that was met with a tricky design requirements and a tight deadline.

“There is a local company at Mannum, TR Male Transport, who we have been using as our supplier loyally for about 40 years,” Jeremy says.

“I’m really proud of the fact that we’ve been able to support them for a really long period of time, consistently all the way through. We have drafting people at Monarto who operate with us almost exclusively and that relationship has existed for about 25 years and spans two generations.

“We’re SA-based so 99% of what we purchase is definitely from SA and we’re very proud of that. We also have a very strong focus towards Australian steel and making sure we’re contributing to a sustainable steel industry.”

Bowhill Engineering is renowned for providing significant employment for the town, including young apprentices. It takes on at least one apprentice a year, and at the moment has six metal fabrication apprentices and one business administration trainee. 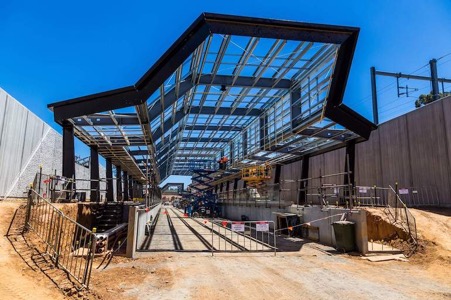 The Oaklands Crossing is also one of Bowhill Engineering’s big projects.

“We had some research undertaken recently which found that Bowhill Engineering employs the same percentage of people in manufacturing within the Mid Murray Council area as Holden did in Adelaide’s northern suburbs at the time of the closure announcement,” Jeremy says.

“That’s a pretty impressive stat when you think about it because Bowhill is such a tiny place. It doesn’t make logical sense (for the business to be located at Bowhill) because there are no support industries around us and we’re somewhat isolated. But we’ve made it work by focusing on our strengths.”

With Bowhill going from strength to strength in recent years, an expansion is on the horizon. The business is planning to underground powerlines that run through the property to give it the space and capacity for a physical expansion that could spur 20 new jobs.

The undergrounding project is a large and expensive feat costed at about $1 million and will be made possible with a $350,000 grant from the State Government’s Regional Growth Fund, in addition to Federal Government support through the Building Better Regions Fund for a similar amount.

Bowhill Engineering’s future expansion will mark a new chapter for the business which dates back to the 1970s, with Jeremy’s parents Brendon and Averil.

Brendon was a farmer with a knack for repairing and modifying farm machinery and equipment and so the mechanic workshop Bowhill Motors was born. Brendon turned the focus away from mechanics and towards local steel fabrication and construction in the 1990s, building on strong foundations of community, reputation and a positive attitude.

These values were instilled in his two sons, Jeremy and Simon, who both went on to play instrumental parts in the business’s success as they grew older.

But tragically in 2002, Simon was killed in a car accident at the age of 30. He left behind a legacy of bold thinking, strong work ethic and a dogged determination which has helped shape the business into what it now has become.

Family is still at the core of Bowhill, with Brendon and Averil still involved in the business alongside Jeremy and his wife Jodie, who have four children.

“I am genuinely excited for the future,” Jeremy says.

“The government support both directly through funding assistance and indirectly through a buoyant economy and infrastructure building creates an excellent opportunity for us to continue to foster growth in our people.”