A ceremony was held on Sunday – the day after the annual Streaky Bay Cup meeting – where McEvoy joined his wife Cathy and children Charlie, Jake, Rhys and Eva for the unveiling.

“I must admit … it’s a bit of a surreal feeling, an outer body type of feeling to see a statue of yourself unveiled in your own town,” McEvoy told the crowd gathered at the event.

Now 41, McEvoy left the Eyre Peninsula town in the mid-1990s to pursue his career as a jockey and became known as the “Streaky Bay kid” as his riding skills gained attention.

The Sydney-based jockey won his first Melbourne Cup at the age of 20 in 2000 aboard Brew; the second youngest jockey to win the race that stops the nation.

In 2017 McEvoy was inducted into South Australia’s Racing Hall of Fame after riding Almandin to victory in the 2016 Melbourne Cup and also won on Cross Counter in 2018. 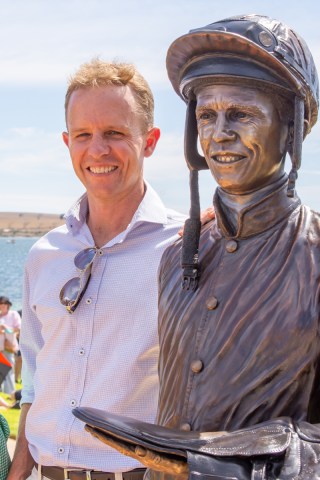 He has also had a stint riding for global stable Godolphin in Europe and has won Australia’s richest race, The Everest, three times.

However, he is known as a humble champion and hopes his feats will help inspire other country kids to chase their dreams.

“I’ll be forever grateful for what this great community has been able to achieve to raise the funds for this statue,” he said.

“There’s is one thing that I hope [this statue] achieves in coming years, I hope it inspires the young kids to work hard and to really push to try and find a passion you are really interested in and you can give 100 per cent into it day in, day out.

“I would like to think that some kids can get some inspiration from this statue and just remember that I was a skinny kid here riding around on my bike, home from the jetty in the evening just like you are, so dream big and go hard.”

The $125,000 statue project came about in 2019 with fundraising efforts including Streaky Bay’s own version of Dancing with the Stars.

The community committee raised $90,000 for the project while the state government chipped in $35,000.

It was created by Port Lincoln artist Ken Martin who is renowned for his bronze sculptures including Adelaide Oval statues of Barrie Robran, Jason Gillespie and Darren Lehmann.

“It was an amazing feeling to be commissioned to sculpt Kerrin,” Martin said.

The unveiling was long overdue after being delayed by border restrictions.

“We’ve had many hiccups along the way, the project was significantly delayed due to COVID restrictions, we would like to thank in particular Ken Martin and of course Kerrin for their patience, attention to detail and perseverance throughout this project,” he said.

The statue stands proudly across the road from the Streaky Bay pub where Kerrin’s father Phil worked for many years as hotel manager.

Phil has already been seen shooing seagulls away with polishing cloth in hand in a bid to stop the bronze artwork from being stained.