2021 AgTown of the Year Awards

It is tough work cropping the drier paddocks of Booleroo Centre and local farmers know technology is vital to encouraging their barley, wheat, canola and peas to thrive.

When they heard about auto steer tractors and precision agriculture technology improving yields, these hardy Mid-North farmers joined forces to build what is now the only community run real-time kinematic GPS network in the country.

A first signal base built in 2008 has grown to four creating a 100 per cent volunteer-run network with accurate GPS signalling that supports more than 150 local tractor systems.

This doggedness is typical of the hard-working community 282km north of Adelaide.

Booleroo Centre is home to Kelly Tillage Australia, once a small local engineering business owned by Shane and Peter Kelly (OAM) that has grown into an international manufacturer exporting agriculture machines to the United States, Germany and Argentina.

“Our manufacturing has now moved to Adelaide, but the R&D still happens here in Booleroo, and we employ local apprentices,” company operations manager Luke Ellery, who grew up in the region, says.

“I felt like we needed a women’s group, and I started a Facebook page called Ladies on the Land and was lucky enough to get some funding, a lot of women wanted more hands-on roles in their farming business,” Jess says.

“We’ve run 13 workshops on the smell of an oily rag and then in 2019 we joined the Buy from the Bush campaign, we’ve now got more than 8000 followers on Facebook, it’s massive.”

Ag industry reaches throughout the small town. Booleroo Centre school has its own farm with an orchard, vegie patch, pigs, chickens and a dedicated sheep shearing course to support the local fine merino wool industry.

Year 12 student Jaxon Kumnick comes from sheep farming stock and wants to work in the industry with support from the school’s sheep shearing and wool classing course. 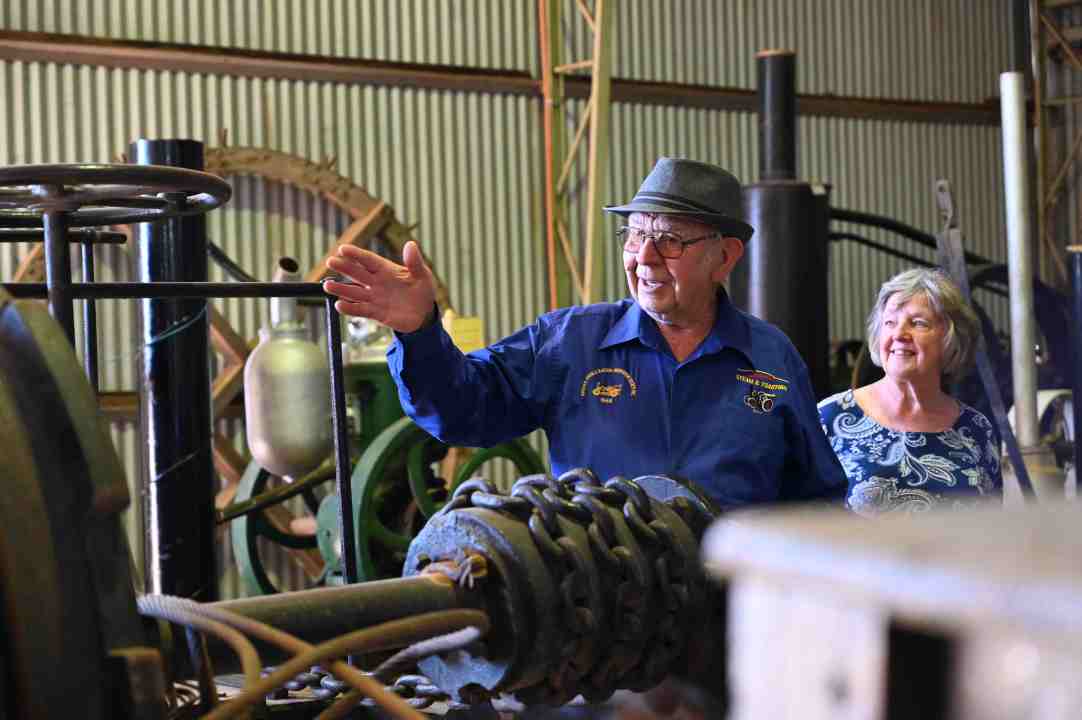 Ian McCallum is always keen to share stories about the state’s largest collection of steam and traction engines started by a group of farmers in 1968. Photo Belinda Willis.

Recent years have tested the locals’ mettle, in 2019 Booleroo Centre recorded its driest year on record and the drought lasted two years.

When it began taking its toll on mental health the community pulled together and organised sheep races along with funding to irrigate the town oval, so more locals were drawn to weekly sporting events.

Along one side of the town oval being watered by its new bore built by volunteers is a new RV parking area, while the other side is home to one of the town treasures, the Booleroo Centre Steam and Traction Preservation Society Museum.

Inside a series of tin sheds, 80-year-old Ian McCallum is keen to share stories about the state’s largest collection of steam and traction engines started by a group of farmers in 1968.

“This place was a dream 53 years ago and now we have about 10 working members and about 50 members of the society from all over Australia, we are all custodians of our state’s agricultural history,” he says.

Booleroo Centre is one of five finalists in the 2021 Agricultural Town of the Year Awards to be revealed on Friday at Solstice Media’s annual Regional Showcase Awards. Tomorrow we visit Kapunda.