BirdLife Australia has released its report as the hooded plover breeding season begins in South Australia.

She said the volunteers assessed 2413km of coastline from west of Ceduna in SA to just south of Jervis Bay in NSW and counted 1584 hooded plovers, including 58 juvenile birds.

South Australian beaches support a significant portion of the hooded plover population, with 51 per cent of the surveyed population – 773 adults and 36 juveniles – residing in SA.

There have already been five new nests spotted in South Australia as the 2021-22 breeding season begins this month.

During the last breeding season, sites on the Eyre Peninsula saw at least six chicks survive to flying age, a positive sign since only one in five nests hatch successfully.

“We are really pleased,” Maguire says.

“It’s a stable increase over the last two years.”

Considered vulnerable to extinction in mainland Australia, the results of the 2020 biennial count reveal an overall positive trend in population, with 37 more birds sighted in 2020 than in 2018.

Over the last decade, the total hooded plover population has seen a 30 per cent increase, according to the recently released report.

The 2020 count has also revealed an increase in population in the South East Discovery Bay region of South Australia.

As beach-laying creatures, hooded plovers build their nests in the sand or fine gravel above the high tide mark of ocean beaches or within the sand dunes. This makes them particularly vulnerable to being trampled by beachgoers or becoming prey to feral foxes or cats. 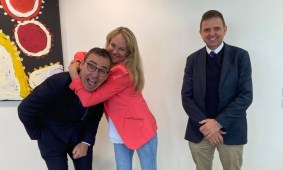 A voice for cross-border communities during COVID crisis

Other threats to hooded plover habitats include 4WD vehicles and rising sea levels.

She says BirdLife is also hoping to direct more focus towards the Coorong in South Australia.

“We would like to learn more about the population there and how they’re responding to the threats,” Maguire says.

There is currently a partial seasonal vehicle ban on Coorong beaches, which will cease in the middle of the breeding season when chicks on the sand are at their most vulnerable.

The biennial count was made possible by BirdLife Australia through funding from the Australian Government’s National Landcare Package.