Glossop will kick off the celebrations today with a ceremony in front of the Glossop Motel to recognise Vice Admiral John Collings Taswell Glossop, who the town is named after.

Events will then continue throughout the region until December to share the history of the Riverland towns that were established by returning World War I soldiers 100 years ago.

Centenary Project Officer Christine Webster said the Riverland communities are excited for the events, which will take place across the three towns in venues such as the Barmera Hotel, Monash Memorial Hall and Barmera Theatre Gallery.

“It’s a wonderful opportunity to remember the World War I soldiers who set up Barmera, Glossop and Monash,” she said.

Other events in the coming week include a will host a Remembrance Service and a Commemoration March in Monash on Sunday, August 29 from 9-11 am, and a street party on Wednesday, September 1 in Barmera.

Webster said planning for the centenaries began as far back as 2018 for Monash and 2020 for Barmera and was helped by a Centenary Grants Scheme contribution of $56,000 to go towards events and projects.

For Glossop, its plans began in October last year after a community meeting was held to see if there was interest.

“There was a turnout of about 20-25 people at that meeting,” Webster said.

She said that the current residents are proud of their soldier settler heritage.

“Three generations now have lived in these communities. They’ve very proud of their ancestry,” Webster said.

“Some still live in the fruit properties established by their grandparents.

“It’s fascinating to look back at what they did to provide fresh fruit and vegetables to those across the state. During WWII there was produce sent to those serving in war.” 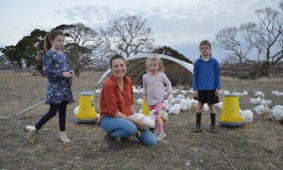 Berri Barmera Council Mayor Peter Hunt is impressed with the community work that has gone into the centenaries.

“I look forward with optimism and confidence that our towns will continue to grow and prosper through another 100 years.”

The current events on offer can be found on Berri Barmera Council’s website.