The testing will be done by the Adelaide-based Australian Wine Research Institute (AWRI) and funded by the South Australian Government.

It is part of a $330,000 recovery package through Wine Industry Development Scheme, which also includes $100,000 for an AWRI-led research trial in the Adelaide Hills to help growers better predict future smoke taint impacts.

The AWRI is also working with state governments in NSW and Victoria to conduct smoke taint testing in bushfire affected regions.

The December 20 Cudlee Creek fire burnt through 25,000 hectares of land and destroyed more than 70 homes, 400 out buildings and 200 vehicles.

A third of the region’s 3000ha of vineyards are within the fire scar, with about 500ha of vines across 60 vineyards, mainly in the northern parts of the region, sustaining direct fire damage.

The Kangaroo Island fires also started on December 20 and burnt 211,000ha – almost half of the island – mainly at its western end.

They were only declared contained last week after more than three weeks of active firefighting by hundreds of volunteers across a 612 km perimeter.

Growers in both regions are anxious to know if widespread smoke clouds during and after the fire have tainted grapes at hundreds more vineyards, making their crops effectively worthless.

This year’s harvest is due to begin in February with sparkling and white varieties, and run through until late March when red wine grapes are picked.

The Australian Wine Research Institute is already considered a world leader in smoke taint research, an area that has received much attention in recent years following fires in many wine-producing countries including the United States, South Africa, Portugal and Canada.

Minister for Primary Industries and Regional Development Tim Whetstone said the subsidised testing would help give growers the information required to make decisions about what to do with this year’s crop.

“Smoke taint laboratory tests are normally $300 per test, so being able to support wine grape growers to access this service at a time when cash flow has been severely impacted is important,” he said.

“Along with tourism, the primary industries sector will be pivotal to the economic recovery of the Adelaide Hills and Kangaroo Island and that’s why we are offering this assistance.

“There is no certainty local grapes will be impacted by smoke taint from fires which occurred while berries were still green. The government wants to be able to give growers the evidence and data they need to give their markets confidence when selling their grapes.”

Smoke tainted grapes can lead to highly undesirable “ashtray” flavours when made into wines.

Some wineries have already begun sending letters to growers warning that they will not be paying for grapes found to be tainted.

Identifying a crop’s commercial viability as early as possible after a smoke event can save growers thousands of dollars in costs on spraying, trimming and picking a potentially worthless crop. 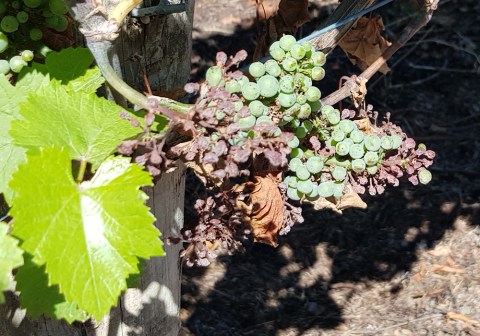 Hemsley-Smith said it was still unclear if their 10ha Cygnet River vineyard planted with Shiraz, Cabernet and Chardonnay, would be affected by smoke taint from the fires that passed within a few kilometres in early January.

“Joch’s about to go over to pick some samples and if we get a smoke taint reading back we won’t even bother netting the vines to keep the crows off,” she said.

“At this stage we’re open and we’re just keeping on and waiting to see what’s going to happen, but the damage so far has been from a falling off of visitor numbers.”

The AWRI study into early identification of smoke taint damage on wine grapes in the Adelaide Hills is already underway.

At the time of the December fire, grapes on the vines were slightly smaller than pea-sized and were pre-veraison, which is a viticulture term meaning before the onset of ripening and the crucial development of sugars.

Unlike previous studies, which have focused on smoke events around the time of harvest, the AWRI research began on January 14 by taking leaf and berry samples from three varieties – Chardonnay, Shiraz and Pinot Noir – from eight vineyards.

AWRI General Manager Business Development Mark Krstic said the current best practice for smoke taint testing in wine grapes could only be conducted two to three weeks before harvest, with no reliable testing methods available for the earlier stages of the growing season.

“Despite its terrible impacts on the Adelaide Hills wine region, the Cudlee Creek fire occurring eight to 10 weeks prior to harvest provides a unique opportunity for the industry to analyse grapes at different stages of ripeness and see if the early analytical results can accurately predict smoke taint,” he said.

“If the results can lead to a reliable early testing process, it will transform the way industry bodies, grape growers and government respond to fire and smoke damage into the future.”

A program will also be offered to bushfire affected wine grape growers from mid-February for farm mapping experts and viticulturists to survey damage to vines, equipment and infrastructure providing topographic maps of vineyard impacts to growers.

Once the surveying is complete, viticulturists from the AWRI will work with growers to assess the data to provide technical advice on vineyard recovery and regeneration.

The State Government has also launched a #BookThemOut campaign to encourage tourists to return to Kangaroo Island and the Adelaide Hills.