Wardill took out the Social Impact Award, presented by Community Corporate, for her work advocating for cancer survivors while trying to find ways to improve the lives of people with cancer.

According to the Cancer Council, an estimated 150,000 Australians were diagnosed with the disease in 2020.

It’s the nation’s leading killer but about seven in every 10 Australians survive for at least five years after their diagnosis.

Wardill’s ambitious but, ultimately, simple goal is to stop the burden of cancer diagnosis and its long-term emotional and economic impacts on survivors through innovative and supportive care solutions tailored to meet the unique needs of each patient.

She said while the group was still in its infancy she had secured close to $1 million in competitive grant funding to support the development of innovative supportive care solutions designed for patient’s unique needs.

Wardill said the challenges of pursuing a career in medical research were many and diverse but reduced government spending on science and research had exacerbated the issue.

“Independent medical researchers, unlike the past, are now entirely dependent on grant funding which is largely administered by the National Health and Medical Research Council (NHMRC),” Wardill said.

“However, since 2010, the success rates for NHMRC funding has steadily declined while the number of high-quality applications has continued to increase.

“Early career researchers are less likely to be funded, especially if they are female, with more and more disenchanted ECRs leaving academia citing job insecurity as the major cause. 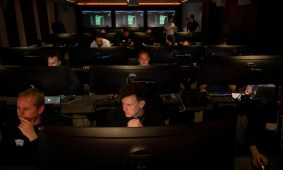 “But I am committed to carving out a researcher career simply because I believe my area of research is completely under-valued, and the needs of people with cancer remain poorly prioritised.”

Since starting her career in supportive oncology, Wardill said she’d published more than 40 peer-reviewed scientific publications, developed and disseminated evidence-based clinical practice guidelines, which have been translated into nine languages, and published a book chapter.

She has won a slew of awards for her work, including the South Australian Young Achiever and a NHMRC CJ Martin Biomedical training fellowship in the Netherlands.

She returned to Australia to establish SORG.