The Barossa Cellar project will become the new home for the Barossa Grape and Wine Association (BGWA).

It will also be used by the association and donor organisations to showcase the Barossa to visiting wine buyers, journalists and wine industry influencers.

The $4.5 million project is being driven by the Barons of Barossa, a group of high-profile wine industry personalities from the region, which bought the 3ha greenfield site between the townships of Tanunda and Angaston in 2016.

The building is being built into the side of the hill, with the cellar section effectively underground and the offices and “Grand Hall” positioned towards the front of the building overlooking the valley to the west.

Excavations are well underway and the foundations have been laid for the entire footprint of the building, which is being built by local construction company Ahrens. 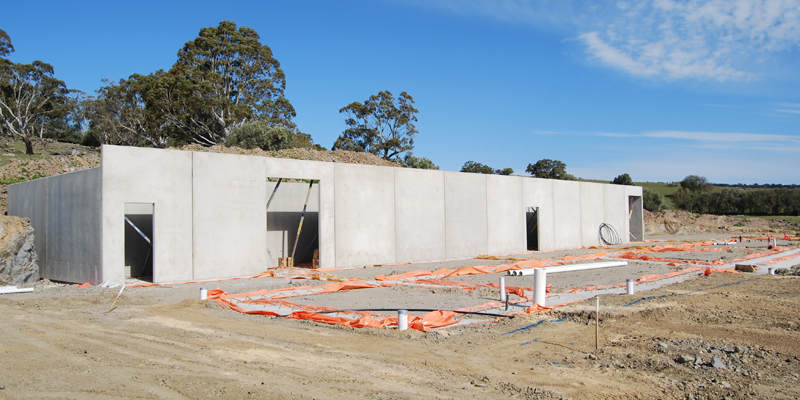 The first concrete walls of the building have been positioned.

Managing director Stefan Ahrens, who is also a Baron of Barossa and on the Barossa Cellar Committee, has agreed to carry out the build at cost price.

The first concrete walls of the cellar have been positioned, with the other concrete internal and external walls to be erected in the next month before the steel framework for the roof is put in place.

The vast cellar will have storage for 2000 dozen bottles from the Barons of Barossa’s trading stock of wine and a museum section with up to 3000 bottles of premium Barossa wine. The museum wine has been donated to the Barons so they can be showcased to enhance the Barossa’s winemaking credentials.

The Barons have been producing and selling Barossa Shiraz under their own label for several years and have contributed $1 million to the project, with the remaining $3.5 million to be targeted through fundraising and in kind support.

Barossa Cellar Committee chairman and Barossa Baron James Wark said so far the committee had raised more than $1.3 million in cash donations and had secured a bank loan of about $1.2 million to fund the remainder of the project while the rest of the money was raised.

He said the community and in-kind support from local companies such as Ahrens, tradesmen and organisations had saved about $1 million from the project’s bottom line.

“People have been extraordinarily generous and our donors have been very broadly based,” Wark said.

“We’ve got close to 70 wine companies from the Barossa and Eden valleys that have become donors, grape growers from the Barossa region, industry suppliers and lots of individuals who wanted to be part of this great project.

“There are very few places in any industry in Australia or anywhere that you can join all these dots whether it be with the local council, the builders, the grape growers and the regulatory bodies and this support is something that is very empowering, very encouraging and, sadly, in many communities quite rare.”

The museum wines will be stored and made available to the BGWA through a yearly allocation to be used for master classes and other tastings for journalists, wine buyers and wine industry groups who can positively influence the image of the Barossa Valley.

The Barons of Barossa formed in 1975 and built its collection from annual wine donations from local companies. The collection includes wines more than 20 years old from iconic Barossa wineries such as Henschke, Penfolds, Rockford, Yalumba, Greenock Creek, Peter Lehmann and Grant Burge.

One of the main fundraising strategies for the project is the sale of about 1800 Shiraz vines that will be planted in a vineyard development at the site next year. About 450 of the vines have been sold so far for $1000 each.

The vines are being propagated at Yalumba’s nursery and come from cuttings donated from 30 of the region’s top Shiraz vineyards.

Donors will have their name displayed in the cellar and will also have the first option to buy wine produced from the grapes grown at the vineyard each year.

“If you were an Australian who liked Pinot Noir, for example, and you had an opportunity to buy a grapevine in Burgundy with access to purchasing wine from that vineyard at a concessional rate, then I think you’d jump at it,” Wark said.

“Flipping that, the Barossa is the great Shiraz region in Australia – it has some of the oldest Shiraz vines in the world – it’s a fantastic opportunity and we’d love people to embrace it and become engaged.”

Wark said the Barossa Cellar would be the only facility of its kind in the Southern Hemisphere.

“This will be groundbreaking for Australia and for most parts of the world.”

A date for the official opening is yet to be set but Wark said the BGWA was “chomping at the bit” to move its offices into the building in May.

The Barons of Barossa will also have an office and small meeting room in the building.

Wark said there had been a great deal of interest from winemakers, growers and donor companies wanting to use the centre.

“Some of our donor companies are excited about the prospect of using the facilities for their customer engagement functions and internal meetings with staff from overseas who may not be familiar with the Barossa,” he said.

“Even though they’ve got their own facilities, they want to be able to use these facilities to show customers and staff they are connected and engaged with the Barossa on a broader scale than just within their own properties.”