Australia’s liquor industry should be keeping a close eye on the proceedings before US District Judge Vince Chhabria in San Francisco.

The Federal judge has found sufficient evidence exists for a jury to hear the cases of hundreds of people who claim that exposure to the popular weed-killer Roundup has caused the blood cell cancer non-Hodgkin’s Lymphoma.

Roundup is not only the world’s favourite herbicide, it’s also preferred by most of the barley and grape growers that feed Australia’s beer and wine industries.

Monsanto, which infamously also made Agent Orange and DDT, has manufactured and sold Roundup since the mid-70s. After long financial machinations, the company recently became a subsidiary of Bayer AG, which promises to bless its new baby with a nice clean new name after spending some $A82 billion buying it.

Monsanto has always insisted its weed killer is safe if used according to the instructions on the container. The US Environmental Protection Agency seemed supportive of this claim as recently as September, when it ruled that glyphosate, the key active ingredient in Roundup, was “probably unlikely” to cause cancer in humans.

The Australian Government’s Pesticides and Veterinary Medicines Authority (APVMA) is insistent that “the use of glyphosate in Australia does not pose a cancer risk to humans”.

On the other hand, two years ago the International Agency for Research on Cancer, a subsidiary of the World Health Organisation, determined that the chemical was “probably carcinogenic to humans”.

It’s easy to spot vineyards where Roundup is used. Unless there’s mulch stacked there to supply nutrients and revive the ground while stifling weed growth, rows of vines with an unnaturally bare stripe of earth beneath them are reliable indicators of glyphosate use.

In November 2016 the APVMA ruled that barley growers could legally spray one application of Roundup at least a week before harvest. Barley growers are concerned that rye grass intrusion in their grain could spread the ergot mould, the critical precursor of the illegal hallucinogen lysergic acid diethylamide, which destroys the barley’s value.

In his ruling, Judge Chhabria threw the evidence of two anti-Roundup scientists out of court, but agreed that three others presented evidence upon which a “reasonable” jury could rule Roundup to be carcinogenic in humans. 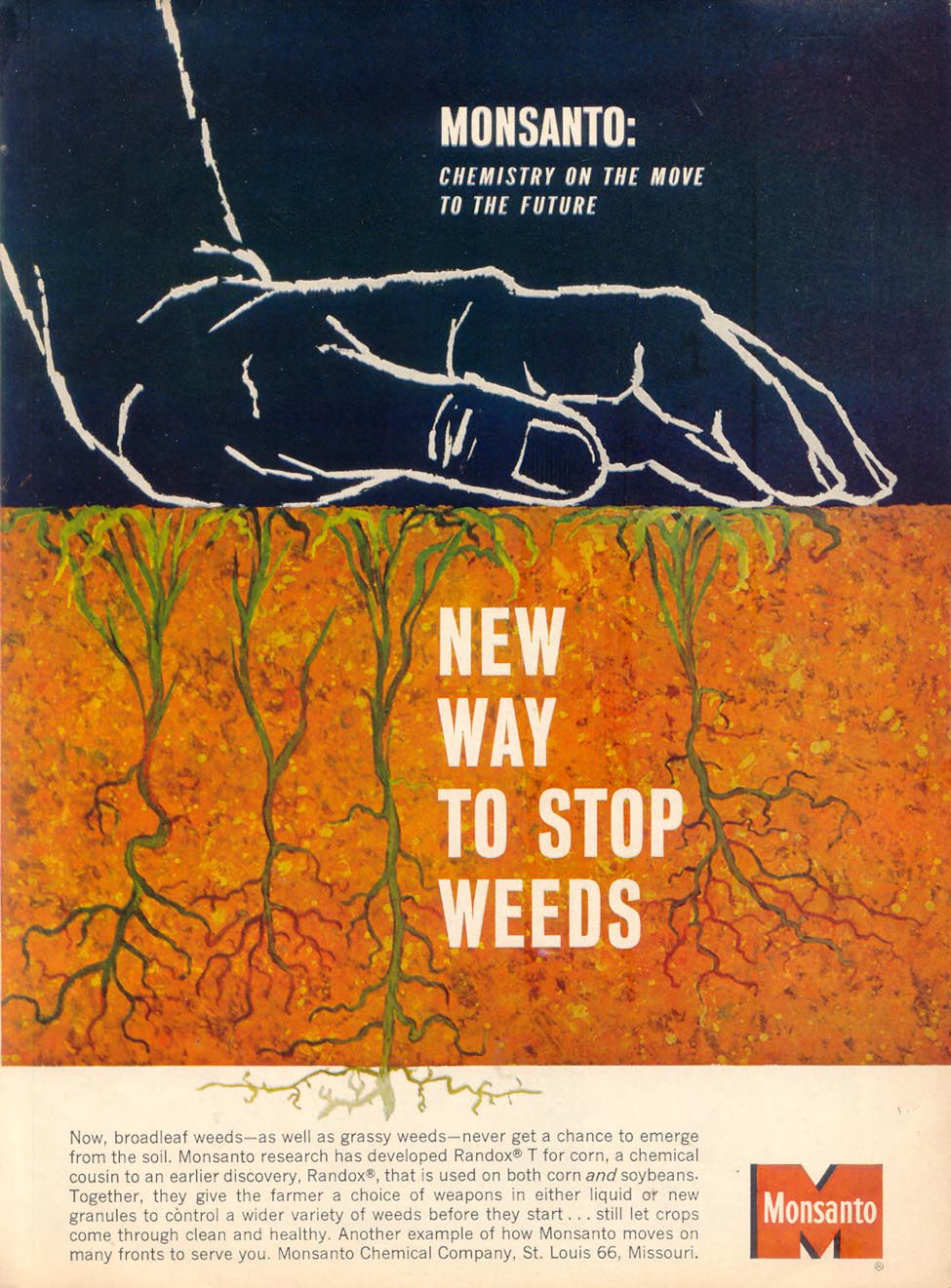 Across the US, Monsanto faces some 5000 lawsuits alleging Roundup causes cancer. Most of these are in state courts which are not bound by Fed rulings but they’re all watching Chhabria very closely indeed. Lawyers for more than 400 farmers have consolidated their claims before him, and will now select specific cases from their number to prove in test trials that their cancer was caused by Roundup.

Monsanto insists there is “absolutely no connection between glyphosate and cancer”, and cites more than 800 scientific papers and studies which it claims support its stance.

Dennis and Bonnie Vice, at Highbank Wines in Coonawarra, were the first South Australian vignerons I encountered who openly abandoned glyphosate in the late ’80s. Their huge industrialist neighbours gave them hell, blaming them for incubating all the weeds in the South-East, which was nonsense. Their vineyard was as clean and tidy as vineyards got. Gradually, their radical pre-poison theory and technique has spread.

Closer to home, David Paxton was the first local to openly abandon Roundup when he began adapting his McLaren Vale vineyards to biodynamic management in 2006. As a well-regarded conventional vineyard manager, he seemed an unlikely convert. He’d attended the first big international biodynamics conference the Victorian winemaker Julian Castagna organised the year before and came home convinced.

“It’s not rocket science,” Packo told me when he first showed me his good work. “Viticulture is all common sense … but of course I was sceptical.”

Just as I was led to admire biodynamics by the delicious Beechworth wines of Castagna, rather than any theories, it was the sheer quality of the wine that “hooked” Packo … from “vines which are in balance: their natural ability to resist disease is enhanced. It’s about the density of the cells,” he said.

“The fruit is more naturally expressed. The true flavour is enhanced … Surprisingly, it’s cheaper. The religion gets dangerously attractive.”

Of course there’s a lot more to organics and bio-d than turning off the poison, and many careful growers who find the bio-d and/or organic licensing procedures annoying and impractical stop using weedicides anyway. Many just get on with it. Unlicensed.

But I watched ground which had been as dead as concrete rejuvenated as others joined the movement: Gemtree, for example, and then Yangarra in my neck of the woods. Others, right up through the ranges to Clare, even the odd rugged pioneer in the Riverland. 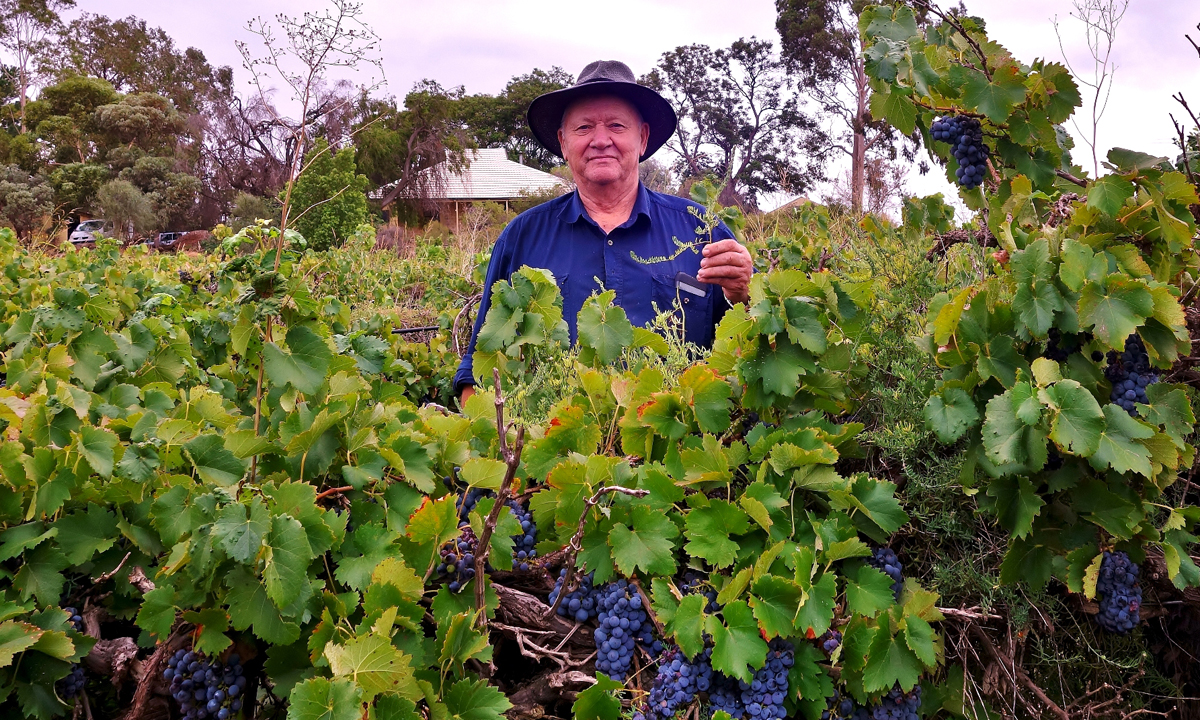 “I love weeds” – Riverland winemaker Michael O’Donohoe of Tom’s Drop, which has been organic for 32 years. Photo: Philip White

The earth regains its old bouncy vigour as its natural biota return with tiny strands of fungi and all the worms and whatnot that mix it up.

Monsanto claims such changes are more to do with anything BUT the lack of Roundup. It claims the decaying roots of weeds killed by the glyphosate supply extra nutrients and therefore restore life to the soil.

However, committed viticulturers right across the country now say disposing of the poison and careful mowing instead, especially by sheep, is the key to those superlative flavours that first seduced me and Packo. Invariably they make no secret about being much happier, as are their staff, that they are no longer handling the poison.

They say the “safety instructions” are threatening enough.

Until folks start putting “glyphosate-free vineyard” on their labels, keep an eye out for licensed organic and biodynamic brands if you too don’t like the stuff.

In flatly denying this, Monsanto counsel George Lombardi insisted there were decades of research backing his client, repeating its claim there is “absolutely no connection between glyphosate and cancer”. Sounding as determined as the coal enthusiasts in our governments, he cited those hundreds of studies and reviews, saying: “Testing has been done by independent scientists, by university scientists, by government scientists … ”

Hundreds of types of crops, countless back gardens, playgrounds, parks and lawns and thousands of kilometres of roadside in more than 160 countries are kept weed-free with glyphosate.

Until, of course, glyphosate-resistant strains of the unwanted vegetation develop, which is happening across Australia at a terrifying pace. In February, for example, Dr Peter Boutsalis, from Plant Science Consulting and the University of Adelaide, warned that “farmers are terrified of glyphosate resistance as it is such a useful product”, citing “thousands of new populations” of resistant ryegrass.

As there are now around 300 glyphosate-containing chemicals on the market since its patents lifted, Boutsalis suggested farmers stick to “high-quality glyphosate products”.

Other local scientists, like University of Adelaide pharmacist Dr Ian Musgrave, suggest there’s no need for glyphosate panic. “You’d have to be eating 1000 fold more than exists on current foods, or up to 100kg of corn with residue every day to reach levels that are a hazard,” he told ABC Rural in November.

Meanwhile, as they sniff precipitative business, legal eagles all over the US are eager and ready to mount class actions should they see a glimmer of hope that their ailing clients might get some recompense.

A typical example is consumer attorneys Baum, Hedlund, Aristei & Goldman, whose website keeps a close watch on the many states and countries which restrict the weedkiller’s use if they haven’t banned it outright.