It’s hard to believe that only six weeks ago this column predicted trade war could quickly erupt in Australia’s biggest wine export market, China. The seeds of this seem to have sprouted in the concern our press and politicians were beginning to show for China’s quiet exercising of manipulative power in the inner workings of our society and education ethics, pushed along a bit by what this writer called the April Fool’s Day edict of Senator Anne Ruston, designed primarily it seems, to prevent Chinese operatives within Australia from exporting wines which purported to be things which they were not.

In that brief gap we saw Treasury heavies leave the much-anticipated Hong Kong Vinexpo to dash off to China to get wine shipments flowing from the wharves where they were being held up by recalcitrant officialdom.

There were more rumours than your actual wars, but among others, we saw Pernod Ricard, the French owner of Jacob’s Creek, also hurriedly navigating a similar dodgy platform to ensure its Aussie product ran freely.

Cynics saw this new product as little more than a deep grovelling conciliatory bow to China; those who appreciate Penfolds’ capacity for spasmodic bursts of revolutionary creation simply can’t wait to see what the blend will taste like, baiju being a powerful spirit made typically from sorghum, rice, wheat or corn, but principally based on sorghum.

These are highly exotic flavours for westerners, as nearly all baiju is consumed within China.

Moutai, for example, the world’s most valuable liquor company – estimated by Forbes in January to have a market value of more than $A190 billion – sees only 5 per cent of its production consumed outside of China, where it is the famous official deal-sealing and toasting oil.

To compare the scale of these things, Australia in total exports about $A1 billion worth of wine into China, including the contentious Hong Kong.

So now that China will have its own hybrid “port”, one wonders what the next step may be.

Continuing in a prophetic mood, permit me discuss something very Chinese which it seems even they have not yet considered as a potential alcohol beverage.

A paraplegic friend introduced me last summer to a herb, Gynura procumbens, which is also known as Sabuñgai or Sambung Nyawa, the “longevity spinach”.

“Eat this stuff,” he said in response to my whingeing about my comparatively piffling health hiccups. “It’s really good for you.” At which point he grabbed a handful of leaves from a pot plant that looked all the world like basil, thrust half of it towards me, and chewed the rest himself.

Rarely have I eaten a fresh plant which gave such an immediate feeling of invigoration and well-being, from its first crunchy chew to the gentle verdancy of my exhalation.

Procumbens tastes a little like a watercress with no peppery character, with a sort of juicy crunch reminiscent of raw carrot and celery. 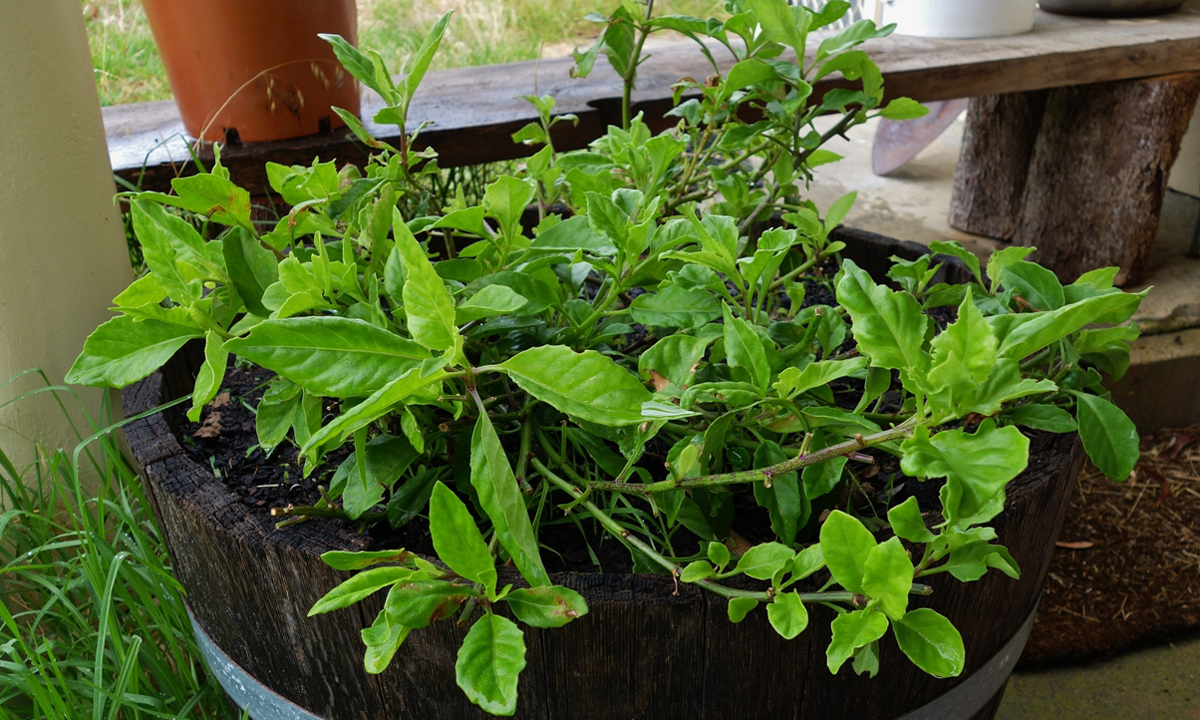 Gynura procumbens: it looks ordinary but is said to relieve many ailments. Photo: Philip White

He gave me a plant to take home. I put it in half a wine barrel full of mulchy, sandy potting soil, gave it a big drink of fish juice, and off it went.

And so did I. Simply eating a refreshing bunch each day seemed to get all the troublesome organs working much more efficiently, coinciding with a general improvement in my well-being and confidence.

Highly sceptical about miracle herbs, I researched it. First, my feeling that I’d seen it before suddenly made sense: it’s a vine-like, procumbent ground cover that grows in the tropics: China, South-East Asia and Africa. Like in jungle clearings, along roadsides.

As for its efficacy as a medicine, I lunged into my regular checker, the United States National Library of Medicine Frontiers in Pharmacology site, which as far as compendiums of scientific health papers go, seems a more reliable source than a skrillion others.

While I’ll leave you to peruse that document at your leisure, let me tease a little by saying this very ordinary looking plant is good for “kidney discomfort, rheumatism, diabetes mellitus, constipation, and hypertension”. It also appears to have “cardioprotective, antihyperglycemic, fertility enhancing, anticancer, antimicrobial, antioxidant, organ protective, and antiinflammatory” capacities.

Given the plant’s alarming tendency to refresh, this twisted mind immediately wondered about juicing it. You need more than I managed to propagate before our chill winter slowed it down dramatically – you need a greenhouse – but jeez it’s delicious, along the lines of a gently-flavoured Verdelho, Grüner or Sauvignon blanc.

With soda and vodka? Don’t tell anybody, but I’m in deep now. I’m onto something way beyond port made from Shiraz and baiju.

Bingo! The cause and the cure, all in the same glass, and delicious.

If a particularly keen drink inventor poured some money into this, man you’d have a drink to please China!

Until the weather warms, or I build some form of greenhouse to increase my winter crop, I’ll have to be content with eating the odd handful of stalks and leaves raw, on impulse, using it in salads or wraps, or indeed floating leaves in soups and Asian-style broths and congee.