While there seems little doubt that Arkady Babchenko, the journalist critical of Russia, was not shot in the back and murdered by the secret services in his apartment in Kiev after all, Russia this week triggered a similarly complex crisis at another press conference in Moscow.

Igor Podporin from Voronezh was in the Zamoskvoretsky Courthouse for attacking and damaging a painting of Ivan the Terrible cradling his dying son Tsarevich Ivan Ivanovich, whom Ivan Snr had just bashed in the temple with his sceptre.

The painting, Ivan the Terrible and His Son Ivan on November 16, 1581 by Ilya Repin, is very important to many Russians. After the assassination of the reformist Tsar Alexander II, Repin painted the work in 1881, in recollection of other gruesome horrors of Russian history. In itself, the painting was an act of abhorrence and protest.

Repin’s portrayal of the mad Tsar’s eyes are said to drive viewers mad; Tsar Alexandar III disliked it enough to have it removed from view. In 1913, Abram Balashov had slashed the canvas three times with a knife, shouting “enough death, enough blood!” but perhaps because there was no gallery bar, he was simply declared mad and sent to a gulag. Repin was still alive to help restore his work.

This time, witnesses observed Podporin use a restraining bollard to smash the protective glass and bash three holes in the canvas. He could get one year’s jail for each hole and an $A64,000 fine. Experts say the restoration of the invaluable painting could cost more than $A200,000.

“I came to look at the painting,” police reported Podporin saying. “I wanted to leave, but then dropped into the buffet and drank 100g of vodka. I don’t drink vodka and became overwhelmed by something.”

“Luckily, the most valuable images, those of the faces and hands of the tsar and prince, were not damaged,” Tretyakov Gallery director Zelfira Tregulova said.

“There were small bottles of wine or cognac in the café. We’re going to talk to the café and ask them to remove them”.

In the court, Podporin denied the liquor bit, claiming the “falsehood of the historical facts depicted on the canvas” was sufficient. 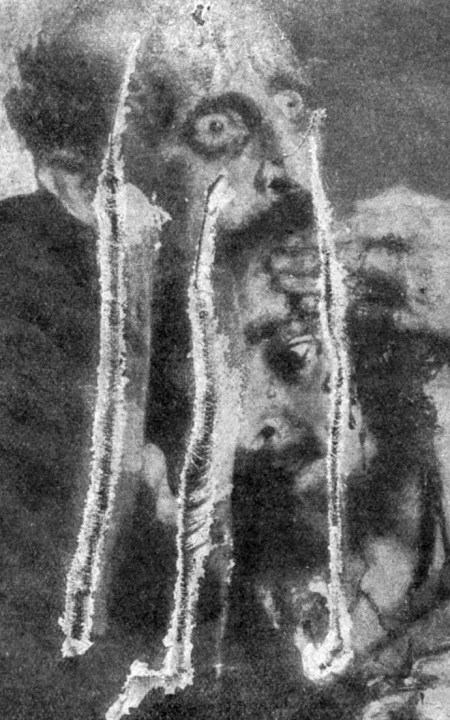 “This painting is inaccurate,” he said. “He [Ivan the Terrible] is numbered with the saints.” He claimed that both police and gallery staff had pressured him to admit to drinking.

Which leads me to the matter of art mixed with alcohol. Bacchus only knows how many times I’ve been tempted to take up a bollard and attack the walls of some galleries, not so much because the art made me do it: usually it’s the damned booze.

I can’t believe how many gallery directors expect their customers to gratefully slurp utterly detestable plonk while we consider spending thousands on the works of our artists.

This is how it works. A painter slaves away for months, even years, shivering in some studio shed with a bladder pack and a can of sardines, making enough paintings for an exhibition. They find a gallery. The gallery sends out the invitations. Then it rings somebody like me to find out which winery will suddenly donate a few cases of wine to lubricate the wallets.

You know, donate. For free.

Uh-huh. Unlike Blalshov and Podporin, winemakers are not necessarily sensitive to works of fine art. Those who do donate tend to send their bottom shelf, for which they can’t be blamed, as the invitations and price lists are already printed with no mention of the grog or its provenance.

Of course I speak generally: not all winemakers, painters, gallery directors and punters suffer such disconnect. I don’t recall, for example, ever being handed a glass of execrable swill – even half-hearted squirt – at an exhibition directed by Kym Bonython, and he didn’t drink. Kym got it: expect our eye time, our adoration and our wallets? Treat the punter with due respect.

You wouldn’t see Kym as ready as the Tretyakov’s Tregulova to blame exhibition failures on the tinctures proffered.

Stand back and consider, and the logic of all this is as strange as the notion of a winemaker giving cellar door tasters a few free paintings every time they visit, whether they buy wine or not.

I joked recently with Stilgherrian, the journalist and internet expert, about the nature of ranking things. He’d suggested ranking the hours of the day, like 1 o’clock is worth four points; 2 = 3 points; 3 = 6; 4 = 7 and so on. My retort compared such futility to the ranking of wine. Tempted to ring out another personal diatribe about how dumb such an exercise can be, I, we, were saved by Babchenko and Podporin, who have rekindled my idea of a better method of communicating the actual quality of the various drinks available.

Until we see art critics ranking paintings with a score out of a maximum one hundred, why can’t we adopt a wine ranking system relating each one to the sort of gallery you’d expect to serve it. Like the new Rotted Waftage Shiraz from Weeping Bigot Wines? I’d expect Legs Larrette to be serving that next time they hang works by Harried Arthur-Smock or whoever at the Shattered Wall Picture Centre.

If, however, we learned to make the viewing of art more of an experiential tourism event, we could work to close the gap between artist, exhibitor/dealer and prospective purchasers by serving those customers the plonk the artist could afford to drink while shivering for years in the shed with all that mess and a can of sardines.

While this may not be much poorer in quality than what the art buyers already get, at least this would likely see more gallery visitors show the sort of passion some of these Russians unleash when confronted by great art.

Like, consider the publicity! I’ll bet you’d never even heard of Ilya Repin til now.

On the other hand, I know a few painters who’d just as likely take up a bollard and help you tear the shit out of some of their more commercial work if you bothered to pour them something exceptional.