Seattle is startlingly immaculate. Wide, clean streets cascade down to the busy waterfront in Downtown. People are friendly. They smile and laugh, and honking cars are a noticeably rare occurrence.

The city of 3.8 million people is undergoing a facelift, with dozens of cranes stretching into the serene skyline, but the biggest city in Washington State has retained its identity as a long-held bastion of progressiveness.

Nestled in the shadow of the Pacific Northwest’s mountains of forests and known as The Emerald City because of its overwhelming greenery, Seattle is home to corporate giants Boeing, Starbucks, Microsoft and Amazon.

It spearheads LGBTQI rights, was one of the first cities in America to legalise marijuana, and is a beacon for music and arts lovers.

Into its second year, Upstream takes over the city’s oldest neighbourhood, Pioneer Square, in a fashion much like the seminal South by Southwest in Austin, Texas. Around 15 venues hosted more than 300 upcoming and established acts in June, with this year’s event headlined by Miguel, Jawbreaker and The Flaming Lips.

But the city is much more than a home for a cool annual music festival.

Tourists and locals flock to Seattle Center in Uptown, built for the 1962 World’s Fair. Headlined by the 184m Space Needle, the precinct offers more than 15 hectares of open space and other attractions, including the Museum of Pop Culture (MoPOP), Chihuly Garden and Glass.

The Space Needle offers incredible panoramic views of the city skyline and across Elliott Bay to the mountains and forests beyond where, on a clear day, the 4026m Mt Rainier looms in the distance.

MoPOP celebrates the immense talents of locals Hendrix and Nirvana, and has a range of rotating displays such as a horror film history and a Marvel exhibition. 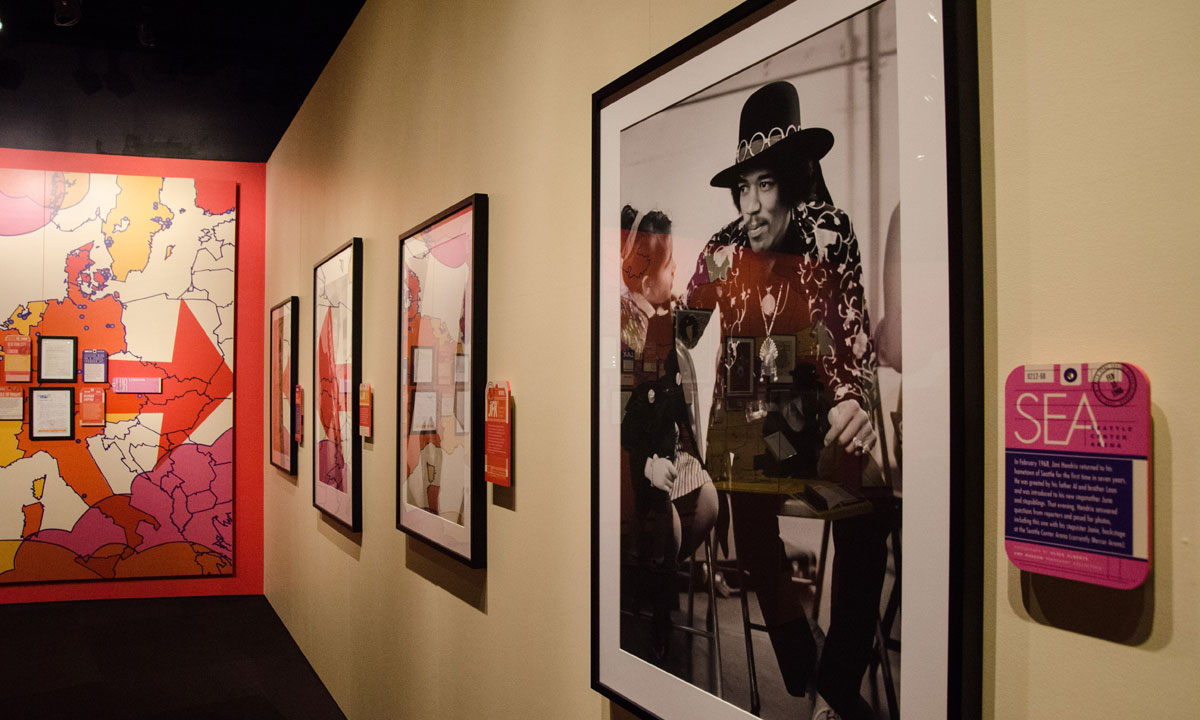 Chihuly Garden and Glass is a winding maze of glass art created by Dale Chihuly, from nearby Tacoma.

Adjacent to the Space Needle, stunning glass structures and ceilings line the rooms, while the outside Glasshouse is speckled with glass flowers and suspended sculptures.

Back near Pioneer Square, the warm and engaging hosts at Bill Spiedel’s Underground Tours provide a walk through subterranean Seattle.

Visitors can marvel at the skylights built in the 1880s to allow underground shopping – the purple glass still visible in some areas of Pioneer Square.

Back up the hill, Pike Place Markets presents locals and travellers with a multi-level maze of farmers’ markets, food and craft stores. 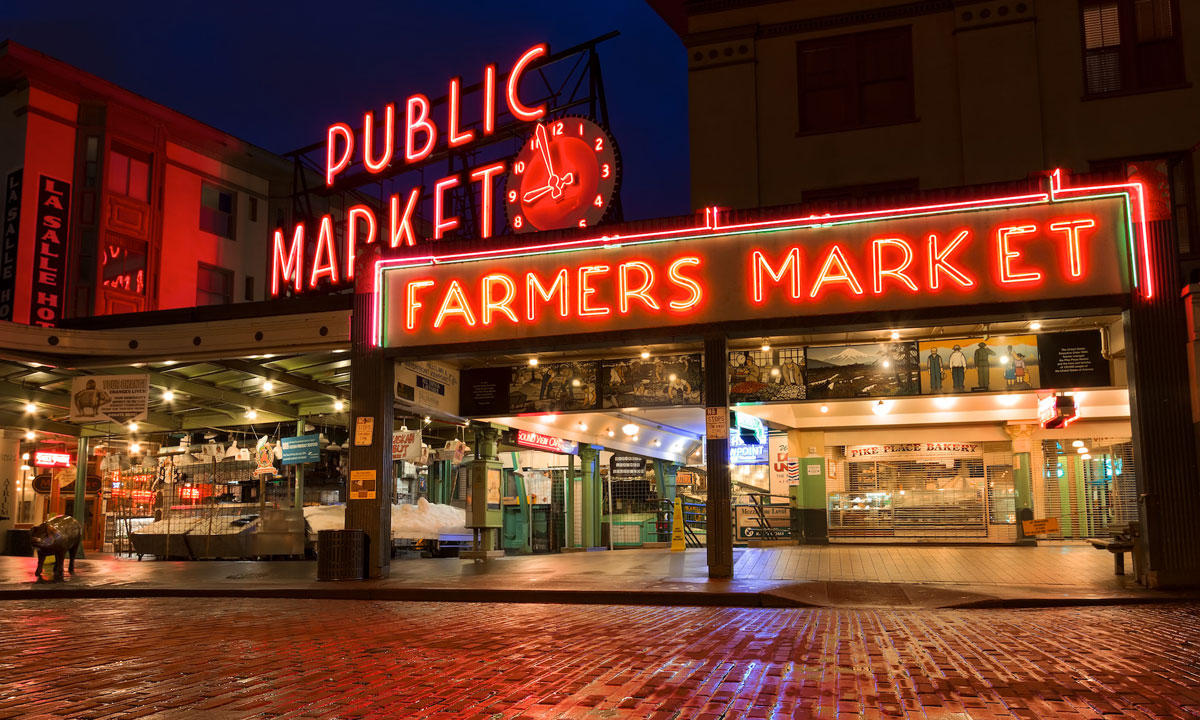 The top-level entrance is a sprawling, open-air fish market that spills onto a heaving street full of diverse offerings such as Russian pastries, cheese stores, delis and baked goods.

Art lovers can take a five-minute stroll back into Downtown to the Seattle Art Museum, where patrons are immediately met with two striking pieces. Andy Warhol’s Double Elvis sits astride a huge wall, a life-size portrait of Elvis Presley in his Hollywood heyday.

A quick 180-turn lands on the breathtaking Untitled by enigmatic American artist Jean-Michel Basquait. On display for the first time on America’s west coast, the 1982 painting by the then 21-year-old is a cacophony of movement and colour and a comment on Black culture in America, as relevant today as it was then.

As the sun sets and hunger creeps in, diners can wander up to the corner of 4th Ave and Virginia St for the twin delights of restaurateur Tom Douglas – Dahlia Lounge and Lola.

While Lola offers more of a seafood and Mediterranean cuisine, Dahlia Lounge is a classic, refined dining space with a dazzling array of drinks to pair with fresh, local ingredients.

Elsewhere, the neighbourhood of Capitol Hill, a 10-minute drive from Downtown, is lined with charity stores, bars and cafes, and dappled with Pride flags.

Armies of volunteers meticulously clear litter and rubbish to prepare the diverse district for the annual Seattle PrideFest to be held in late June.

Seattle is the sort of city that visitors don’t want to leave. It may not be the tourist haven New York or Los Angeles is, but just a few days in the bubbling city and it feels like it could one day be home. 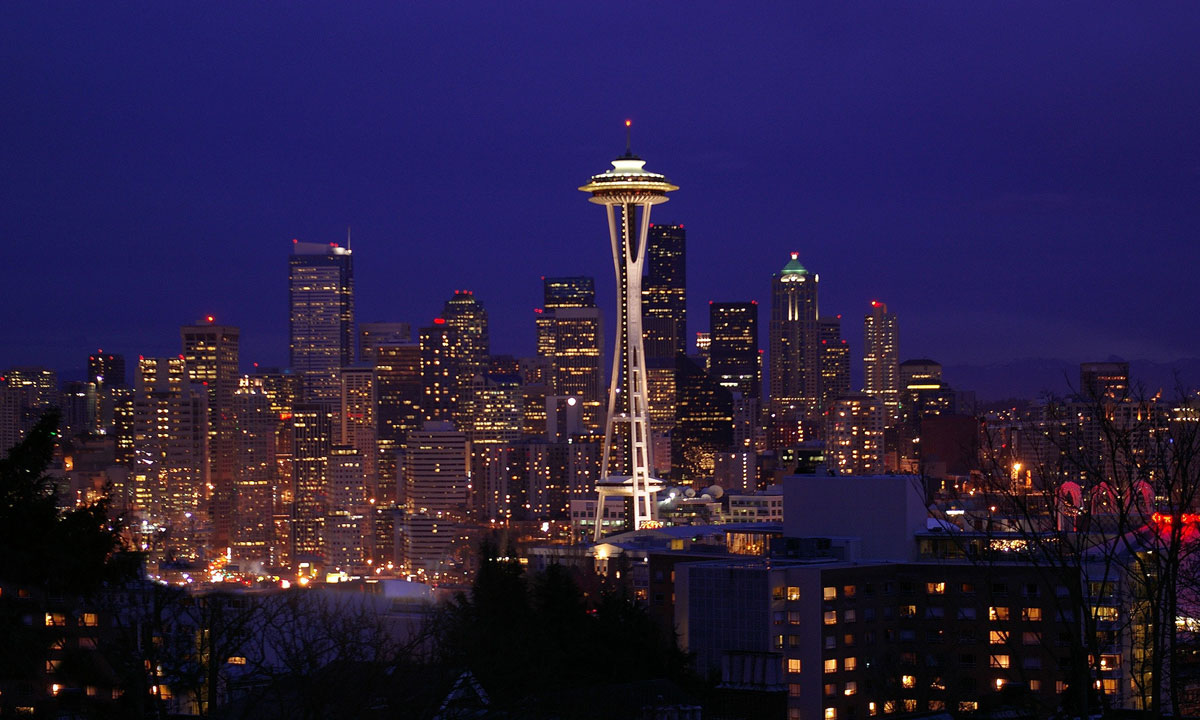 Getting there: Virgin Australia flies to Los Angeles from Sydney, Melbourne and Brisbane. Delta Airlines flies you from LA to Seattle in around three hours.

Staying there: Loews Hotel in the heart of Downtown gives visitors a great base. It’s surrounded by a cluster of bars and restaurants. A 10-minute stroll leads to Pioneer Square in one direction, the pier in another direction, and Pike Place in the other. Visit

Playing there: Spend a day at Seattle Center to visit MoPOP, Chihuly Gardens and Glass, and take in the incredible views from the Space Needle. Explore underground Seattle and the waterfront, stroll through Capitol Hill and stop at bar for a quick drink or bite to eat. Marvel at the collection in the Seattle Art Museum and dine at nearby Dahlia Lounge.

The writer travelled as a guest of Brand USA and Virgin Australia.