We’ve been tracking the cat for around an hour when my guide, Ban, stops in a clearing and tells me to go behind the truck.

“Just be quick and keep your eyes open.”

“Dibs on her camera,” one of the other tourists says to her friend as I climb down, and they both erupt in peals of laughter that does little to steady my nerves.

We are on a game drive in the Linyanti Wildlife Reserve in Botswana, a country I knew virtually nothing about before I arrived bleary-eyed from Australia.

It’s nearing the end of the wet season, and the bush is full of new life.

Baby impala scatter like billiard balls as the truck rumbles past, baboons nurse pink-faced babies, and little giraffes amble into the scrub on stilt-like legs.

Impossibly small elephants awkwardly learn to use their trunks, sometimes missing their mouths and delivering a load of grass into an eye.

The day starts early at the luxury tented camps run by Wilderness Safaris in Botswana and a handful of other nearby countries.

We are woken at 5am, a flask of hot water delivered to the door for tea or coffee, and are on the road within an hour.

There is rarely a plan on the game drives – more often than not the guides simply set out and wait for mother nature to unfurl her own agenda for the day.

Sometimes we find early paw or hoof prints, which might give clues about animal movements. Other times we simply round a corner and unexpectedly find a pride of fat lions lazing under a tree in the heat of the midday sun. 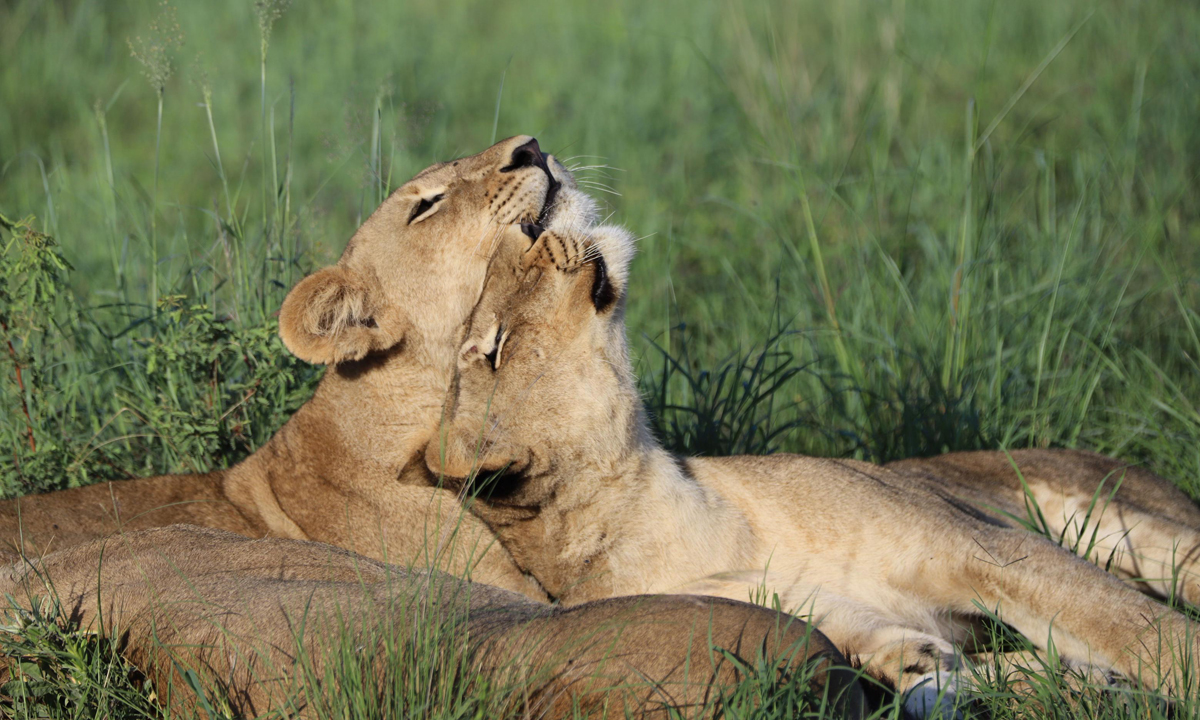 Each camp in the Wilderness network has its own character, and wildlife that is abundant at one might be absent at the next.

DumaTau, which is the first of three camps at which I am staying, is breathtakingly pretty. It is set on a lagoon, which is confettied with white lilies, and home to hippos who loudly munch their way past my tent in the middle of the night.

Chitabe Lediba is further south in the Okavango Delta, and overlooks a marshy waterhole that is spangled with colourful birds that flit in and out of the reeds as the red lechwe, an antelope common to the region, prance and splash through the water.

We sit around the fire at night under a velvet sky scattered with stars and listen to the wild dogs call in the distance.

My third camp, Little Vumbura, is perched on an island and is accessed only by boat.

The surrounding delta floods heavily when the summer rains flow down from Angola, and most of the roads and the narrow wooden bridges become submerged except for the very tops of the support pylons, which the guides use to navigate their way across.

In addition to game drives in trucks, guests at Little Vumbura also have the option of exploring the area in a flat-bottomed canoe called a mokoro, which is propelled by a pole.

I spent the first 10 minutes panicking about tipping into the water and ruining my camera before finally putting my trust in Max, who is my poler for the afternoon.

He points out the minuscule frogs responsible for the cacophony of noise at dusk and dawn, the ducks wheeling in and landing near the lily pads, and the fish eagles perched in the naked branches of trees that have been destroyed by the resident elephant population.

It is a serene way to spend an afternoon, with a drink and nibbles on an island at sundown.

Running the camps is a convoluted logistical exercise that Wilderness Safaris appears to handle faultlessly. It maintains a fleet of trucks for game drives, with single-engine planes to fly guests between the camps and to bring in fresh food on a weekly basis.

A camp that hosts a maximum of 12 guests might employ 80 staff, who need to be provided with onsite accommodation and meals.

Many of the camps have recently installed their own solar plants, which need maintaining, and guides receive extensive training in everything from animal tracking to using cameras that guests have not managed to master before their trip.

The company employs local people, and its little on-site shops stock locally made craft products including mats and baskets woven by the female employees.

No request was too much trouble, and staff remembered every guest’s name after the first meeting.

We never did find the leopard that morning after spending hours tracking her journey through heavy mopane trees and palms. But a few days later, without even trying, we found a beautiful female lazily tracking prey from the top of a fallen tree branch just metres from our truck.

That’s the beauty of the safari – nature guarantees nothing. The thrill of it comes in the detective work, the “a-ha!” moments when you do spot something.

Some days are bountiful, others less fruitful.

If you want guarantees, go to the zoo. At least there is no chance there of being eaten while on the loo.

Getting there: South African Airways flies from Adelaide to Kasane in Botswana, with stopovers in Perth and Johannesburg.

Playing there: African Wildlife Safaris can organise an eight-day safari adventure in Botswana, including guided game drives, boat and mokoro cruises, accommodation and all food and drinks, with prices starting from $5681 per person. Camps in the Wilderness Safaris network feature luxury tent suites, with views of the African bush.

Spend the morning on a guided game drive to find lions and leopards, enjoy sunset drinks watching elephants at a waterhole, explore the world’s largest inland delta by mokoro with some truly spectacular bird-watching, or simply relax on your private deck while listening to the sounds of the bush.

The writer travelled as a guest of South African Airways (SAA) and African Wildlife Safaris.