We’re looking for the wilderness, but we’ve been driving for several kilometres along a gravel road through a landscape that appears entirely tamed.

First there was farmland and now we’re surrounded by a forestry plantation full of spindly timber soldiers standing to attention in uniform rows, submissively waiting for the axe to fall.

It’s not quite what we’re looking for from an adventure in the Tarkine, a 447,000ha reserve in Tasmania’s north-west which includes Australia’s largest remaining tract of cool-temperate rainforest.

But then, without warning, the road opens out into a clearing amid much more mature trees and a sign confirms it is the entry point for Trowutta Arch, the first stop on our self-guided itinerary along what is called the Tarkine Drive.

A 15-minute walk through beautiful rainforest leads to the arch itself: a rare geological feature created by the collapse of a cave, which also resulted in two sinkholes, one of which is full of water more than 20m deep.

Beyond the Trowutta Arch is a deep, water-filled sinkhole. Photo: Suzie Keen

The Tarkine is home to numerous sinkholes, one of the most impressive of which is Lake Chisholm, a large, permanently flooded limestone sinkhole. Its still, inky surface reflects the surrounding eucalypts and other rainforest trees; if you’re lucky, you might spot a platypus.

The 500m walk into Lake Chisholm is also a delight. This is where we first sighted the most majestic old-growth trees – some still standing proud, others long since fallen and now covered in moss on the forest floor.

But it’s at the Julius River reserve, around 8km further along the road, where you really feel you have fallen down a rabbit hole into an ancient enchanted forest.

Here, there’s a pretty picnic/barbecue area and a choice of two walks, one of which meanders alongside the river, while the other is a 30-minute loop track. There’s a surreal feel to the latter, with large myrtles (they grow up to 40m high) and sweetly scented leatherwoods; tree trunks covered in moss, lichen and alien-like fungi; and myriad shades of green everywhere you look.

Then, just to cap it off, a potoroo pops up from the undergrowth.

Embraced by the rainforest at Julius River. Photo: Kylie Goldsack

Trowutta Arch, Lake Chisholm and Julius River are all on the Tarkine Drive map. They are among 12 stops located along the same stretch of windy road (the C218), which makes for an easy day trip – with as many short walks as you like along the way – from the nearby coastal township of Stanley.

It is recommended that you take two days to complete the full Tarkine Drive, which also takes in the Arthur-Pieman Conservation Area along Tasmania’s north-west coast.

The tiny Arthur River township is another ideal base for exploring the Tarkine. It doesn’t have the restaurants and other amenities of Stanley (which itself is only a 10-minute drive from the much bigger town of Smithton), but it is located right on the river mouth, with a range of kayaking and riverboat cruise options available, plus the rugged coastline on its doorstep. 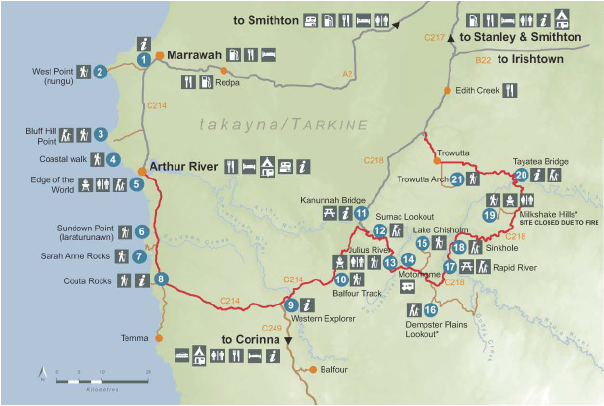 The Roaring 40s winds that lash sightseers at The Edge of the World lookout, where the Arthur River meets the Southern Ocean, are a small price to pay for the view of the crashing swell. Driving further south, there are more lookouts, walks and wild beaches, including at Sarah Anne Rocks, an area with dramatic coastal rock formations which is named after Tasmanian watercolour artist Sarah Anne Fogg.

If you take the Bass Highway route from Stanley to Arthur River (which takes just over an hour, but isn’t part of the designated Tarkine Drive), then it’s worth also stopping along the way at Tarkine Forest Adventures at Dismal Swamp. This is a 640ha sinkhole explored via a maze-like boardwalk which meanders through a forest that includes blackwood and stringybark trees, swamp areas, wildlife and local artworks inspired by the setting.

A fallen giant in the Tarkine rainforest. Photo: Suzie Keen

Discover Tasmania describes the Tarkine Forest Reserve as being “roughly bounded” by the west coast, the Arthur River to the north, the Pieman River to the south and the Murchison Highway to the east.

It features a diverse landscape that includes mountain ranges, buttongrass plains and coastal heath, as well as the rainforest.

But expectations of a completely untamed swathe of wilderness are quickly dispelled by evidence of the extensive logging industry, with huge commercial forestry plantations alongside the rainforest areas.

The Tarkine has long been at the centre of battles over logging and mining activity, with only a small percentage actually designated as national park. As recently as November, the Bob Brown Foundation hosted a rally on the lawns of Parliament House in Hobart demanding greater protection of the area.

Whether it is because it isn’t designated as national park, or perhaps due to its remoteness in relation to Tasmania’s cities, the Tarkine doesn’t attract the same number of tourists as many of the state’s other attractions.

Visiting in September, we had the rainforest all to ourselves at most of the designated stops on the Tarkine Drive. And looking up in awe at those majestic, towering old trees, with only birds and a lone potoroo for company, it’s hard to imagine how anyone could argue that this special place doesn’t deserve protection from further encroachment.

Getting there: Stanley is 404km from Hobart and 225km from Launceston. Arthur River is nearly 83km, or just over an hour’s drive, from Stanley. The Tarkine Drive begins around 60km from Stanley or 48km from Smithton.

Staying there: Located at Circular Head next to the geological formation known as The Nut, Stanley is a pretty town with colonial buildings, shops, cafes, restaurants and a wide choice of accommodation. Arthur River is a much smaller township, with a caravan park and self-contained accommodation available, but just a couple of small shops selling essential supplies.

Playing there: Read more about the Tarkine Drive here. Discover Tasmania is the official travel website for Tasmania.

More photos from the Tarkine rainforest:

Sinkhole Lookout – one of the stops on the Tarkine Drive. Photo: Suzie Keen 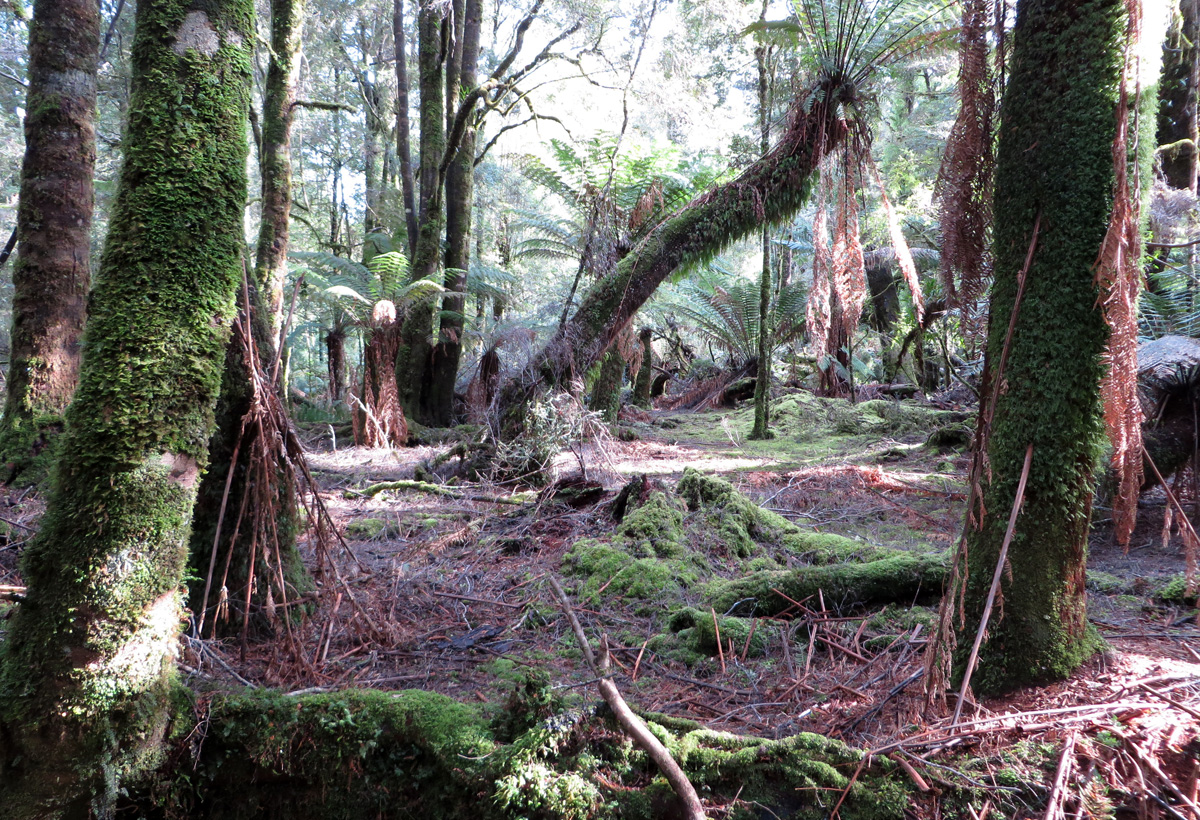 At The Edge of the World, Arthur River. Photo: Suzie Keen