The tourists who pour into Bali pose a conundrum for Indonesia. The government wants them to keep coming, but would like them to explore more of this diverse and beautiful nation.

Bali is only one of Indonesia’s 17,000 islands. The island is packed with four million people, and attracts about the same number of overseas visitors every year.

I am visiting Bali for the first time in 36 years, and the change is a shock. In 1980 we stayed in primitive losmens and dodged packs of wild yellow dogs. We soaked up the sun, bought sarongs, had massages on the beach, and gorged on cheap satays and nasi goreng.

Fast forward to 2016. The Balinese are as charming as ever, and the food and shopping are good (though not as cheap). Most of the beaches are reserved for beach clubs and hotels. Few people go into the sea, but the swimming pools are huge, and the cocktails inviting. Wild tourists have taken the place of wild dogs.

You can’t say Bali is spoilt, because people clearly have a ball there. But it’s not the same as it was.

So perhaps it’s time to glimpse Indonesia’s myriad other attractions.

Just west of Bali is Java, home to more than half of Indonesia’s total population. Jakarta, the busy, buzzy national capital, is on Java. So is the cultural centre of Yogyakarta, and its ancient temples of Borabudur and Prambanan.

Less well known, and even closer to Bali, is the province of Banyuwangi.

Banyuwangi is in Java’s far east – the bit closest to Bali. (Much of what’s on sale in Bali comes from Banyuwangi.) Ferries run constantly between Banuwangi’s Katapang port and Gilimanuk in western Bali. The voyage takes about an hour and costs a bargain 6000 rupiah (about 65 Australian cents).

Banyuwangi resembles Bali in 1980, only with a Javanese and Muslim twist. There are emerald-green rice fields, unspoilt beaches, fabulous scenery, three national parks, and a colourful and flirty welcome dance, the gandrung. And because only 50,000 foreigners a year come to Banyuwangi, it’s definitely unspoilt.

Of all Banyuwangi’s attractions, one is literally a highlight. You can climb a volcano, clamber down into its crater and see blue flames licking the sulfur. Welcome to Ijen.

You climb at night. Leave your hotel in the town of Banyuwangi around midnight, then drive 45 minutes to the start of the track. From here it’s a 3.5km climb (much of it up a 40-degree incline) to the rim of Ijen volcano. The walk costs 10,000 rupiah – about $A1.

At night it’s cool enough for a puffer jacket, smelly enough for a breathing mask, and rough and muddy enough to call for good boots and a headlamp. The young and fit might do the climb in an hour and a half, but the rest of us take up to three hours. (It’s dark, remember.)

If you’re apprehensive, order a “taksi” – a sort of cushioned wheelbarrow that’s pushed and pulled by small, tough locals. You can walk part of the way, and use it for a breather when the going gets tough. A taksi up and back will set you back 800,000 rupiah ($A80).

Even if you can manage the climb, it’s worth spending 200,000 rupiah ($A20) for a guide, who will provide reassurance and maybe a walking pole. Most of the guides have been sulfur miners here.

Ijen is both a natural wonder and a workplace. And what a workplace, you realise when you get to the top and begin the perilous clamber over slippery rocks down into the crater.

The miners work there in hell for two hours at a stretch, in acrid air, cutting the sickly yellow chunks of sulfur that burn with a blue flame. 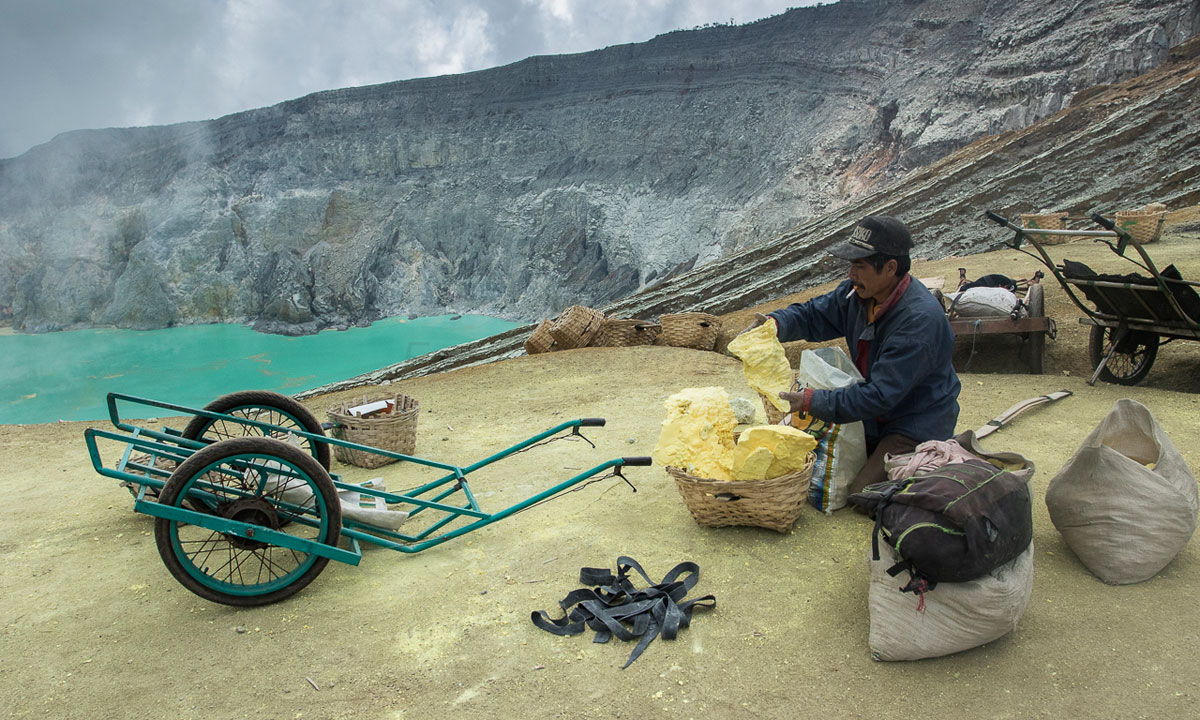 A miner breaks sulphur into small pieces so it is easier to carry. Photo: Francesco Veronesi/ flickr

When their double cane baskets are full, they raise the load – 80kg or 90kg – onto their shoulders and carry it out. For this backbreaking work the miners receive a pittance – about 300 rupiah a kilo. That means about $A2.70 for an entire load.

The physical feat is astonishing. Then the miners begin the process again.

Ijen is the first place the sun hits Java. The blue-pink dawn reveals a lunar landscape and a murky turquoise lake, Kwata Ijen, in the crater’s depths. Two nearby volcanoes loom through the mist.

The miners continue to pour up from Ijen’s crater, carrying their yellow loads.

Our guide, who was a miner for 12 years, describes the work as “very dangerous”. He should know: he badly hurt his leg in an accident.

And what’s it all in aid of? Perhaps you’ve seen sodium laurel sulfate among the ingredients of your shampoo, liquid soap and detergent. The sulfate may well have come from Ijen’s sulfur.

As I said, amazing. See it for yourself.

Getting there: There are no direct flights from Australia to Banyuwangi, but there are plenty of services from here to both Jakarta and Denpasar with Qantas, Garuda Indonesia and AirAsia among the major carriers. From Gilimanuk in western Bali you can take a 6000-rupiah ($A0.60) ferry to Katapang, Banyuwangi. Soon you’ll be able to fly direct: flights from Denpasar to Banyuwangi’s new airport are scheduled to begin in December, and direct flights from Jakarta to Banyuwangi are due to start in March 2017. (Until then expect to change planes in Surabaya.)

Staying there: I stayed at the Santika Hotel Banguwangi, a Western-style hotel with views of Ijen. It can arrange drop-offs and pick-ups to the start of the Ijen walk.

Playing there: Your hotel or travel agent can arrange a guide to take you up the volcano. For more information on Indonesia’s attractions, visit www.indonesia.travel.

The writer travelled as a guest of the Indonesian Ministry of Tourism’s Wonderful Indonesia trip.