The restaurants are among a number of South Australian businesses incorporating innovative measures to help keep their businesses open while minimising the spread of coronavirus (COVID-19).

The changes follow the ramping up of the Australian Federal Government’s advice to practice social distancing and reducing public gathering limits from 500 down to 100 people.

In response, city cafe and coffee roastery My Kingdom for a Horse yesterday began offering a “call, tap and collect” option for customers as well as a 20 per cent discount on pre-ordered takeaway meals from the Wright St business.

Owner Emily Raven said she hoped the initiative would encourage customers to continue supporting local businesses while trying to limit the spread of the virus.

“We can still keep everybody working and get the food and drinks to people so they won’t miss out on their coffee. We’ve got a bit of an abridged menu to what we normally do.”

Raven said the decision to offer a takeaway menu came after a weekend of poor trading.

“Business was pretty normal for this time of year up until the end of last week when we really saw a dramatic downturn,” Raven said.

“Over the weekend we dropped by about 25 per cent and this week we’re sitting at about 60 to 70 per cent of normal trade, which isn’t enough.

“Like most hospitality businesses, we have pretty high labour costs and we’ve got 20 very, very loyal and committed staff and they were the first thing that I obviously thought about.

“We’re hoping if we can push a bit of extra business this way it will keep the kitchen going, keep the baristas going and keep the morale up – and I guess that’s something else.”

On the opposite corner of  Whitmore Square, Cafe Troppo co-owner Alex Harris said the business planned to roll out a food delivery service at the end of this week.

“We have 15 staff, most of them casual, and we were trying to work out a way to stay afloat and keep our staff employed and get through it all together,” Harris said.

“Our plan, because we have access to wholesale distribution, is to be a bit more of a corner store for a lot of the residents. We’re in a residential part of the city and that way we can try and keep our suppliers in business and also us in business and supply food to residents – coffee, milk, bread and that kind of stuff.”

He said once the service was up and running, Cafe Troppo aimed to deliver hampers and food boxes in the CBD, with a particular focus on the city’s southwest.

While some businesses had chosen to use online platforms for food deliveries, Harris said Cafe Troppo would be using current staff for food drop-offs.

“We’re telling people to email and give us a call at the cafe and we’ll pretty much be able to do delivery service and pick up … hopefully by the end of the week there will be an easier system to order on our website,” Harris said.

“At this stage we’ve got normal trading hours, so 7.30 until 3pm (for delivery).

“For pickup, for veggie boxes and online shopping like bread and stuff like that it will be Wednesday to Friday.”

Another city southwest business Sparkke at the Whitmore is taking action by increasing the distance between diners in eating areas and ramping up its bottleshop for takeaways.

On Monday, the Pennington restaurant posted on its Facebook page it would provide “a delivery service for the first time ever. We will now be able to deliver our delicious food right to your door step or work place.” 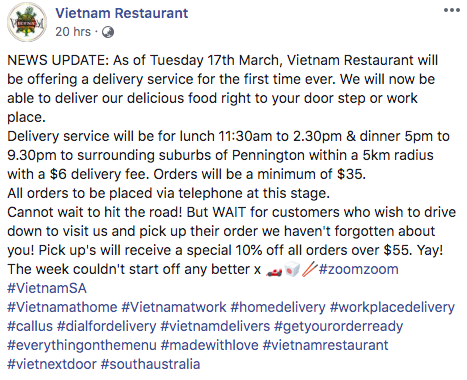 The move to delivery is in line with suggestions from the restaurant and catering industry’s peak body, which has told members, where possible, to use “virtual kitchens” and online platforms, such as Uber Eats, in order to continue trading.

Restaurant and Catering Industry Association CEO Wes Lambert said the organisation had heard from hospitality businesses across the country who had begun using online platforms for food services in the past week.

“Delivery apps are quite popular in South Australia, especially Adelaide, because of the condensed nature of Adelaide,” Lambert said.

“And so we certainly would be advocating that as many more (restaurants and catering companies) as possible get onto the platforms as more and more individuals are required to work from home.”

“As well as using gloves and masks and keeping their businesses as clean as practical,” he said.

“I’ve also written to the commissioner to request an exemption for our liquor license, to see if … during the pandemic we can do takeaway wines, because a lot of people are going to want to be in the safe environment of their homes,” Sasi said.

“We were considering doing takeaway food but we’re thinking probably not … because there’s a shortage of plastic containers.

“Also we don’t want to contribute to an issue we’ve tried so hard to eradicate and that is increasing plastic consumption.”

Sasi said the bar was preparing for the State Government to announce a South Australian lockdown for up to two weeks in the coming days.

“Anything longer than that and I really hope there are some measures in place to support businesses, because it’s going to be really tough – especially if you’re still new and paying off fit-out costs and whatever – to get back on your feet once it’s normalised.

“We’re hoping that if it is a hit that we need to take for the next two weeks, that as a business we’ve been diligent enough in the last six months of operating that we will be able to maintain job security for our team … but if not, that’s where we’re hoping the liquor licence of South Australia will at least allow us to be able to sell wine for takeaway consumption off the premises and bring in at least some revenue.

“It’s really difficult because there is so much uncertainty and you don’t know if as soon as you put something into a plan it’s going to become null and void.”

Meanwhile, The Gatsby Lounge, the latest iteration of the basement space at 110 Grenfell Street, which only launched three weeks ago, has announced via Facebook it will close “until future notice as the COVID-19 is spreading.”