Located on the corner site that for many years was the home to Café Mondiali, Svago is the project of Sam and Nancy Izzo, who have given the premises a completely new fitout and décor and plan to open it for breakfast, lunch and dinner from next week.

Nancy and Sam, a former part-owner of East Terrace Continental, are both first-generation Australians whose parents migrated to this country from the Naples region of Italy.

“I come from the south-east, from Mount Gambier, and my family’s always been involved in restaurants there,” says Sam.

“I’ve always had this thing that I want to create an Italian restaurant with the kind of food we’re used to eating … if we had to capture it, it’s artisan Italian with a modern twist.”

Head chef at Svago will be Brett Murray, who was most recently at Inglewood Inn in the Adelaide Hills and before that worked at Rigoni’s Bistro.

While he has played a key role in designing the menu for the new restaurant, some of the dishes also reflect the influence of both Sam and Nancy’s mothers, aka the Nonnas.

A neon light at the front of the restaurant will let diners know when one of the Nonnas is visiting the kitchen, with the occasion being marked by the offering of a special dish in their honour.

“The idea is that we’ll have a special menu offering [perhaps a pasta, gnocchi or cannoli] as a tribute to who we are and our heritage … it creates a bit of fun,” Sam says.

The restaurant’s fresh fitout includes a range of seating areas, a central bar, a new mezzanine level, and an open window to the kitchen, where an imported Italian pizza oven has pride of place.

Members of Nancy’s extended family in Italy have an artisan pizza-oven-making business, and the 1.4m-diameter oven was made brick by brick, with each of the small colourful bricks featuring an intricate mosaic design.

In several weeks, the couple will also take delivery of a mini version which is mounted on a three-wheel vehicle and will be used for festivals and private events. 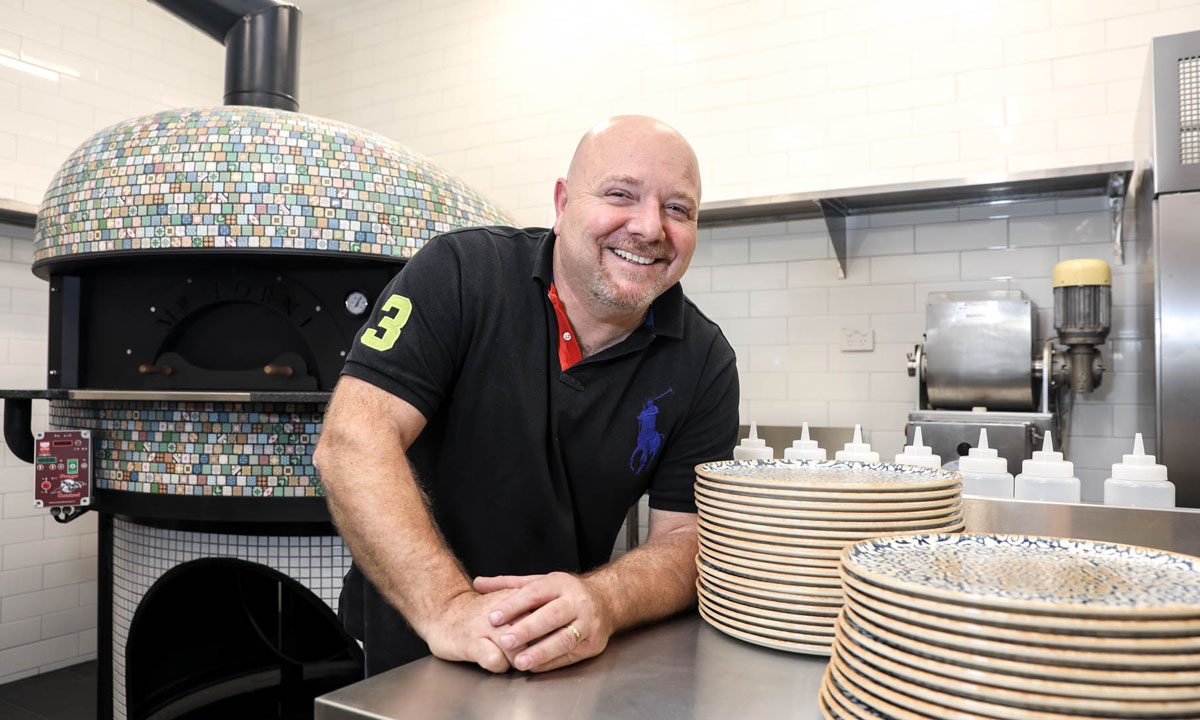 The couple say all Svago’s pasta and sauces will all be made in-house, and aside from a few imported Italian cheeses and prosciutto, the vast majority of their ingredients will be sourced in South Australia.

Alongside a large selection of pizza and pasta offerings, diners will be able to choose from the likes of peperonata, arancini, calamrari fritti, porchetta (wood-oven-baked pork belly, which will be available as a dinner main with crispy fried gnocchi, on pizza and also on rolls at lunchtime), pesce del giorno (fish of the day) and desserts such as a budino di bomboloni (ricotta-filled bombolini, passionfruit curd and coconut ice cream finished with a pistachio praline).

In addition to SA and Italian wines, and a collection of classic cocktails, the drinks menu will feature a selection of Italian liqueurs such as Amaro Montenegro, Del Capo and Strega.

Svago means “fun” in Italian, and the Izzos are keen to ensure this is part of the restaurant’s ethos.

“I have always wanted to set it up so it’s comfortable for families to come and eat,” Nancy says. “I don’t want it to be too formal or intimidating.”

For Sam – who suffered a health scare a few years ago – Svago marks a welcome return to the industry, and he says the Parkside site was a no-brainer.

“I thought the location was good and our concept would do well here. It’s close to the city but out of that hustle and bustle of the city… it just ticked all the boxes for us.”

Svago is at 55 Unley Road, Parkside. Keep an eye on the Facebook page for an official opening date.