“Our partners are always commenting on this business marriage that we’ve developed because we literally speak to each other three or four times daily.

“Tim’s much more of a creative person than me because he has a communications background, whereas I’m much more operational, so it’s just been a great match.”

Ford, who works in the health sector, grew up in the same social circles as SA Museum worker Gilchrist, but it wasn’t until a dinner party three years ago that the pair connected through their shared passion for gin.

“We were acquaintances and I’d only met him a few times,” she says. “Then my friend came over from Sydney and we went over for dinner to catch up and that’s when I literally off the cuff just mentioned that I was interested in learning about distilling and launching some sort of business.

“Tim was really interested and I had to check that he was serious so we had a proper meeting and we started talking about numbers and why we wanted to be doing this and what we wanted to achieve from it and it just stemmed from there.”

Both Gilchrist and Ford had minimal distilling experience before embarking on their business venture, but their vision was clear: to create a gin that was “nothing too spicy and nothing too fruity”, but which people would “constantly have stocked in the cupboard and keep turning to when they’re after a beautiful gin and tonic”.

“The best way to learn is just to start doing it and testing and tasting and talking to other people in the industry,” Ford says, adding the pair also enrolled in a distilling course at Adelaide University and watched countless YouTube videos to deepen their understanding of distilling.

“It took a year of mucking around using a 10-litre still and about 80 distillations to finally come up with the recipe that we’ve now landed on.”

Ford and Gilchrist bought an old mechanics workshop at Thebarton, which gave them the space to house their “old school” 100-litre copper still, which Ford sourced from Portugal.

“We don’t ever want to be making massive volumes of spirits but we also don’t want to be completely tiny, which you would be limited to if you did it from home,” Ford says.

“We kind of just stumbled across this space when we were looking at commercial properties and it seemed perfect, being just opposite Ounce Gin’s cellar door.”

From there, Happenstance Gin was born – a signature 42 per cent gin named after the chance encounter that led to the business’s launch.

The spirit is described as a “citrus-forward gin”, with “traditional staples such as juniper and coriander that combine elegantly with contemporary botanicals like lemon myrtle and strawberry gum”.

Ford says it also contains hints of fennel and nutmeg, which add complexity and create a balance between sweetness and spice.

“I just love a good gin and tonic, so I’d recommend serving it with a splash of tonic, lemon peel and some thyme or rosemary.” 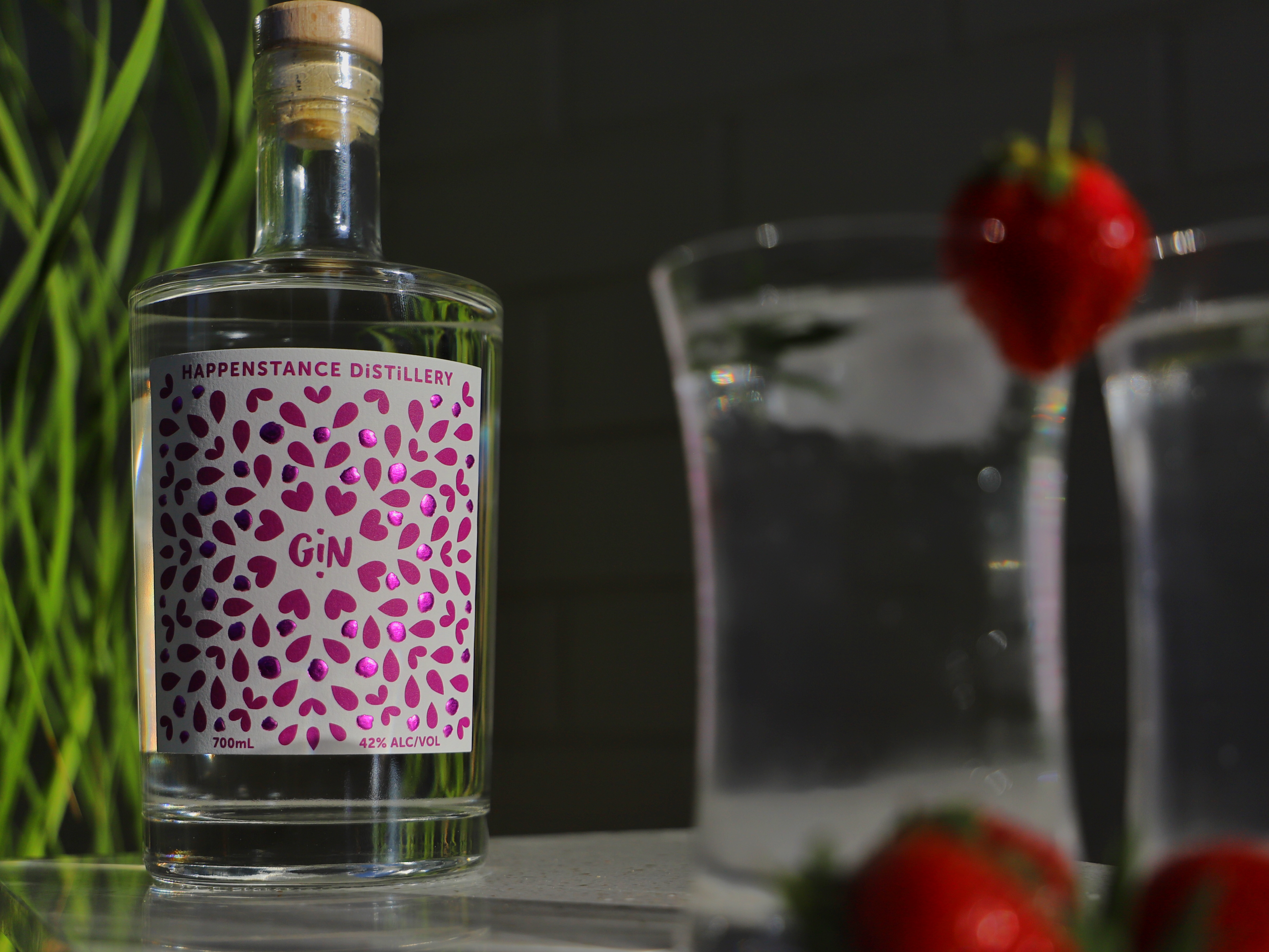 They have now have their sights set on expanding the Happenstance label, starting with a traditional Portuguese sour cherry liqueur made using the trial batches of Happenstance Gin.

“My partner is Portuguese and their family makes a sour cherry liqueur, so we followed their recipe to make our first batch,” Ford says.

“With the 80 trial distillations of gin that we did, we had a whole lot of alcohol that tasted like gin, so we redistilled that to get rid of the gin flavour and then added sugar, spices and sour cherries and have let it sit.”

The liqueur is made using morello cherries, which Ford says are not that easy to source in South Australia.

“There’s two producers in the Adelaide Hills that I know of and last year one of them was only open for one day of picking. This year we’ve found someone who’s got a bigger stash of it and she was quite happy to give us a large amount.”

The pair also plan to launch seasonal limited-release gins once the signature label gets off the ground.

“It will probably be one or two a year, depending on how we go,” Ford says.

“I’d also like to make a spiced or a buttered rum, but that’s a totally different process to making gin, so we can only do that when we have some more spare time – probably in another year at least.”