Doctor Who, Amy, Rory, Clara, K9 and Boothy are entrusted with the job of keeping Sally and Bill Hood’s chickens safe.

These Maremma sheepdogs were raised from puppies alongside the couple’s 6000 chickens at Hood’s Earth Produce (producers of Earth Eggs) at Keith on the Limestone Coast, and now protect them from predators and make sure they stay within the farm boundaries.

“We don’t have any fences. The chickens are free to go wherever they please,” Sally explains.

“We couldn’t have the chickens without our dogs.” 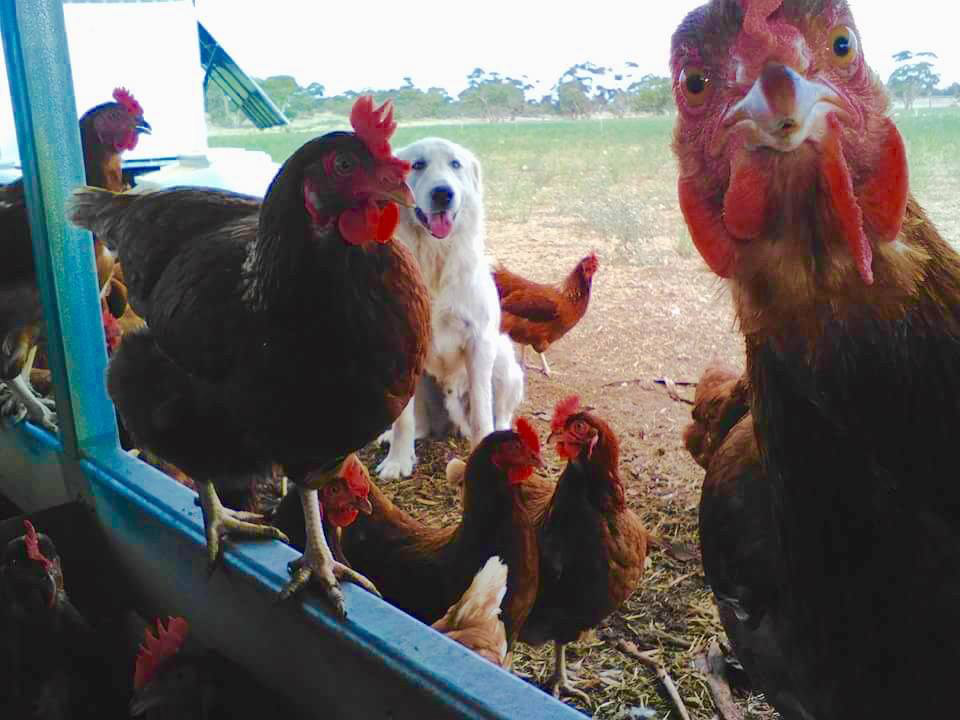 Some of the hens and one of Hoods’ seven Maremma dogs.

This sentiment is echoed among many other free-range egg producers around the state.

Richard and Terressa Langford, at Fleurieu Free Range Eggs at Mt Compass, have 3500 chickens under the care of their four Maremmas (Millie, Misty, Sam and Ralph); the Oatens from Adelaide Hills Pastured Eggs rely on Maremmas Tom and Ruby to watch their hens; and Kathy Barrett, from Katham Springs Kangaroo Island, says they couldn’t let her hens roam without the help of eight Maremmas.

Another common sentiment among these producers is unhappiness with the recent changes to the definition of free-range eggs.

On March 31, it was announced that the stocking rate for producers to have their eggs labelled as free-range would be 10,000 hens per hectare, a dramatic increase on the 1500 hens per hectare recommended by the CSIRO in 2002 and supported more recently by the RSPCA.

While Cleland Gully Free Range Eggs relies on good fencing and a couple of alpacas, rather than dogs, to keep its chickens safe, it is also concerned about the changes.

Owner Jon Mawby says the new regulations will increase competition for current producers by opening the market to new producers who previously didn’t comply with free-range requirements. As a result, he says he will need to increase his number of hens per hectare from 1500 to 3000 in order to keep prices down.

“Ten thousand [hens per hectare] is just too many,” says Mawby. “The big picture at the end of the day is low-income families with two to three kids aren’t going to pay $8 a dozen for free-range eggs.”

Cleland Gully Free Range Eggs is located at Tooperang, near Mt Compass on the Fleurieu Peninsula, and provides eggs to hotels, restaurants and cafes, as well as independent shops and IGAs. The chickens graze on irrigated pastures with plenty of natural shelter and sleep in 700sqm sheds that are open 24 hours a day.

On the smaller side of the production scale, the Oatens from Adelaide Hills Pastured Eggs plan to expand their flock from 450 hens to 1500 by Christmas.

Located 10 minutes from Mt Barker in the Bugle Ranges, their farm’s current hen-to-hectare ratio is 30. The pastures provide chickens with up to 25 different grasses and legumes, and they live in three, 8m-long caravans designed to be moved around the property to help fertilise and regenerate the land.

The Oatens’ two-year old Maremma Tom has kept all foxes away since the farm began operating last year and has recently been joined by Ruby, who is following Tom’s lead. 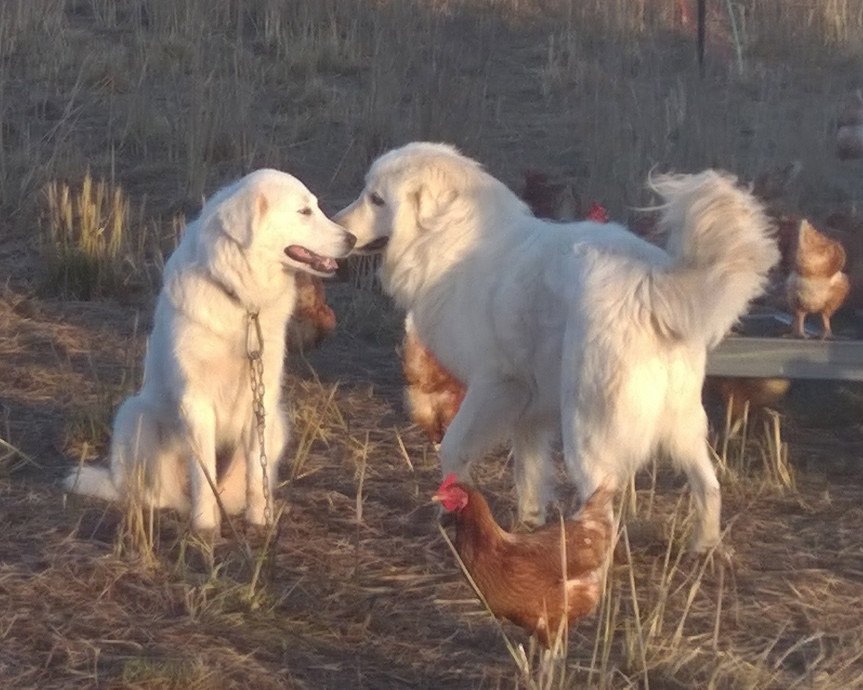 “They allow the chickens to behave naturally with the freedom of being protected 24-7,” says Adam Oaten.

While the new free-range definition will not affect how the Oatens produce their eggs, they are still unhappy with the changes.

“We’d like to distance ourselves from the association of free-range,” says Oaten.

“Ten thousand birds per hectare is one bird per square metre. Those birds aren’t having the freedom to do what chickens do.”

To Oaten, the new definition is open to interpretation and exploitation by bigger producers.

“The new legislation doesn’t force chickens to go outside of the barn. If there’s no incentive to go outside, they will effectively be barn-laid eggs and the consumer is the one being duped,” he says.

With 65 per cent of Australians currently choosing to buy free-range eggs, Oaten would like to see a new gold standard of eggs labelled as “pastured eggs”.

“Pastured eggs would describe chickens that are rotated to fresh pasture several times a week, allowing the land to recover and regenerate in between,” he explains.

Sally Hood, from Hood’s Earth Produce, says her main concern is the description on the label.

“All free-range means is that those chickens are able to go outside. I wish we could come up with a system that could define what we do,” she says.

“From the consumers’ perspective, they need to know where their value for money is and why they’re paying more for our free-range eggs than for others.

“Let the big guys have free-range. Let’s get some words to describe low-density free-range or nomadic free-range.”

The Hoods’ Earth Eggs were recently named by Choice as the lowest hen-stocking density farm in Australia, with a density of seven hens per hectare, but Hood says the actual number is four.

She is excited that an increasing number of people want to know where their food is coming from.

“We had 75 people visit our farm on our last open-day weekend. We had people drive two and a half hours from Adelaide to see what we do. That rocks my world.”

Katham Springs Kangaroo Island produces organic free-range eggs from 4000 chickens at a hen-to-hectare ratio of 150. As well as grazing on pasture, the chickens are fed on a diet of organic wheat, broad beans, oats, barley and peas.

Kathy Barrett, from Katham Springs, says their chickens sleep in mobile sheds and are protected around the clock by their eight Maremmas: Kloe, Cora, Nolan, Seisia, Jasper, Trixie, Talon and Fergus.

“We usually keep them in pairs as we think it’s nice for them to have company,” she says. “They live in the paddocks with the chooks from eight weeks of age and it takes them about 12 to 16 months before they actually start to work.”

Barrett is also the secretary of Free-Range Egg Producers of South Australia 1500 (FREPOSA 1500), an informal group of egg producers which recently campaigned for free-range status to be given only to farms with 1500 hens per hectare or less.

“We wanted the bigger producers to find a new term, not capitalise on the one we’re using,” she says.

Richard Langford, from Fleurieu Free Range Eggs, refuses to sell to supermarkets as he believes there is no respect in the relationship between supermarkets and producers.

“They’ve seen the success of local free-range producers like Rhodes and have decided they want in on the profits,” he says.

Langford sees producers with two different ideologies being lumped under one label.

“There’s been an industrialisation of free-range egg production. They’ve destroyed the free-range label,” he says.

“Basically, if we’re going to have a system where the quality of eggs is measured by the quantity of hens per hectare, then the consumer is the one who is ultimately missing out.

“Consumers aren’t going to get what they’re paying for. They’re being hoodwinked and now it’s being legitamised and legalised.”

Langford is also concerned producers will start to claim space that is not meant for chickens to meet the required ratio.

“I think soon most eggs on the shelf will be claiming free-range just to claim their share of the profits.

“There is a consideration as to whether I want to be in this industry with these ethics. To be up against politics and greed isn’t why I do it.” 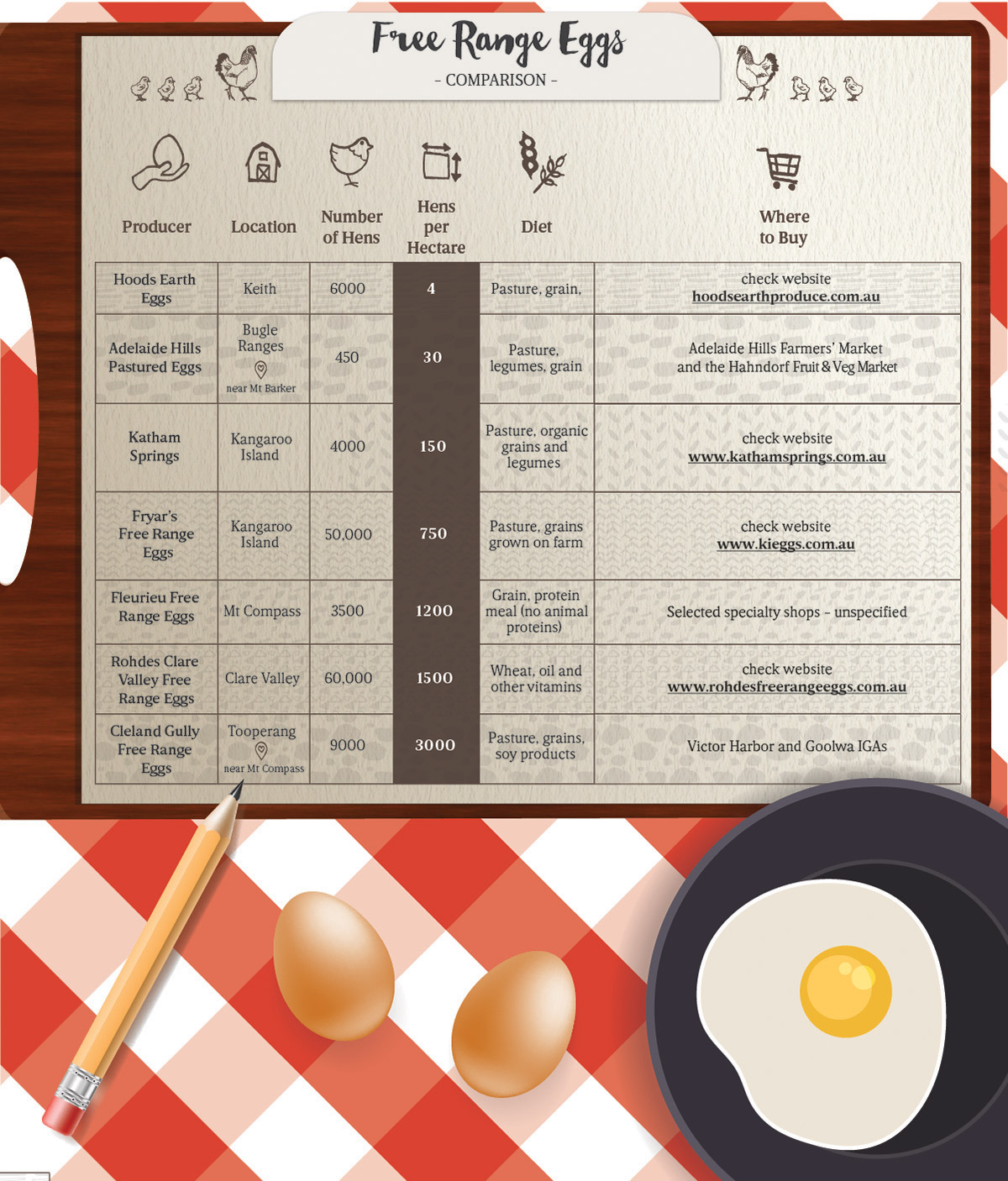