Packed lunches will be a thing of the past when Paul Baker brings his inspired menu to Flinders University’s $63 million Student Hub and Plaza next year.

The award-winning head chef of Botanic Gardens Restaurant has partnered with Blanco Food and Events to introduce Flinders’ new flagship restaurant Alere, which is a Latin word meaning “to nourish”.

Alere is an exciting project for Baker, who will continue to focus on using fresh, local and in-season produce.

“The food reflects a lot of the same ethos we use at the Botanic Gardens Restaurant,” he says. “My role is to create the blueprint for Alere and to maintain the standard.”

Alere, which has ocean views, will offer a new dining experience for university students and staff as well as the wider community, says Flinders director of buildings and property, David Banks.

“We’re keen to make this an exciting and inviting space for the entire Flinders community,” he says. 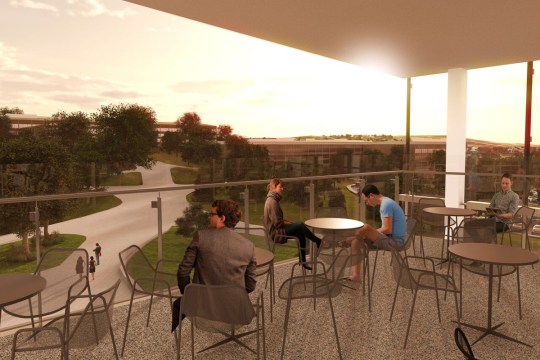 The proposed setting of Alere.

The redeveloped Hub will incorporate study spaces and a diverse range of food options for students and staff.

“Flinders is re-envisaging its approach to food and beverage as part of the redevelopment,” says Banks.

“The quality of the food offered at Alere and in the rest of the Hub will be a different dining experience from what has been offered on campus before, and very different from traditional university cafeteria fare.”

Baker adds: “We will be creating a venue that will change people’s perceptions of what university dining is and will be in the future.” 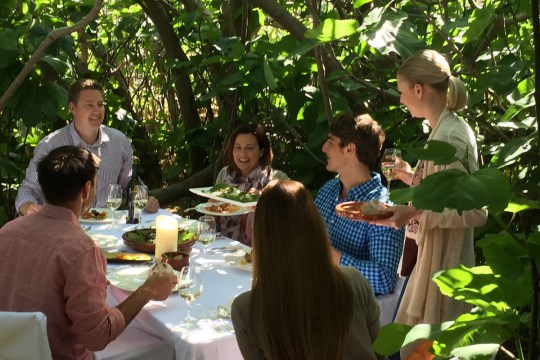 Kangaroo Island foodies Nick and Rachel Hannaford and Sasha Sachs are opening up their unique fig tree restaurant and candle-lit shearing shed to the public.

The fig tree and shearing shed dining experiences were previously available only for Hannaford & Sachs private events and guests of Life-Time retreats, their luxury accommodation at Snellings Beach on the north coast of the island.

“I don’t know anywhere else you can have lunch in a fig tree that’s 100 years old,” says Nick.

“Rachel is bringing together produce from all over the island to create an eclectic tasting menu with Greek and Mexican influences which will be served to diners sitting at different tables in different rooms throughout the fig tree.

“The experience is as much about food as it is about the ambience of the old tree – there’s nothing like it on Kangaroo Island.”

At night, dinners will be served in the historic shearing shed that was built from native sugar gums by the some of Kangaroo Island’s first settlers. The Hannafords have filled the shed with antique furniture, candelabras and other pieces of their family history.

“Initially we’re opening up the fig tree and the shearing shed from December until June from Wednesday till Sunday, and then once we’ve seen how it runs, we will release similar dates from the following year and perhaps look to opening permanently,” says Nick.

Tasting a piece of history 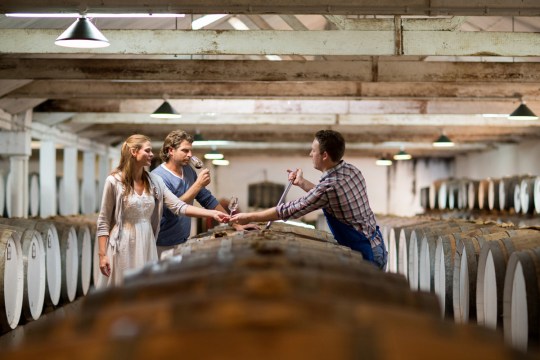 Seppeltsfield has launched two new tasting experiences at the historic Centennial Cellar, opening up one of the world’s most treasured wine lineages more broadly to the public.

The collection holds every vintage of Seppeltsfield Tawny (Port) from 1878, when Oscar Benno Pedro Seppelt began the legacy, to the current year.

Moments in History ($175 per adult) allows participants to taste a cross-section of the collection, giving a perspective of its span and diversity, and insight into how the wine evolves over time. You can taste the year of Elvis Presley’s death (1977), the Moon landing (1969), D-Day (1944), the Wall Street stock market crash (1929) and the sinking of the Titanic (1912).

Years of World War I ($200 per adult) takes participants on an evocative tasting journey of the five consecutive years, from the beginning of World War I in 1914 and the Anzac landing at Gallipoli in 1915, through the years following until the signing of the Armistice in 1918.

“The points in history that we are tasting are serious in nature, but when people can put the wine into a context they can relate to, it just makes that experience a little more poignant,” says Seppeltsfield Wines’ Chad Elson.

“Part of the experience is to show how every vintage has its own character. You’re seeing different generations of winemakers and different expressions of grape variety.” 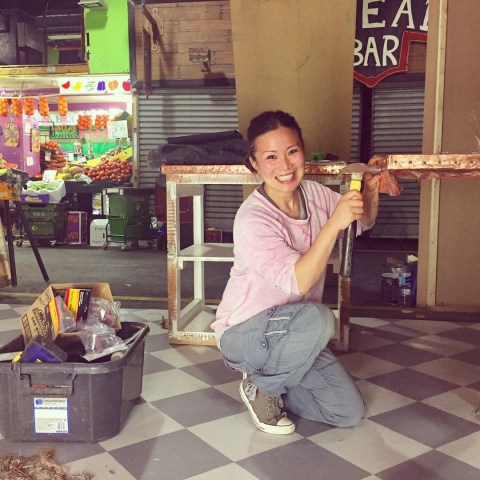 There is great excitement at the Adelaide Central Market, with celebrity chef Poh Ling Yeow about to open a permanent stall on December 8.

The stall will be called Jam Face, after her baked goods and condiments brand which many Adelaide foodies will be familiar with from the Adelaide showground Farmers Market.

New restaurant for the Adelaide Hills 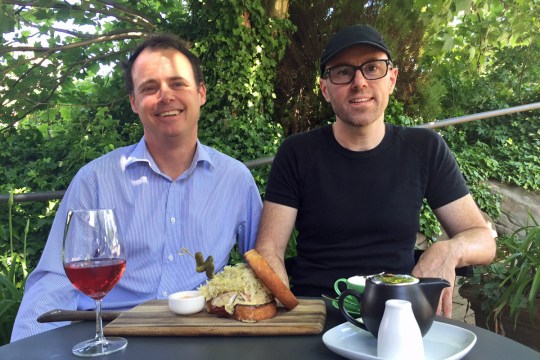 New restaurant Fred Eatery has opened in the village of Aldgate with a head-turning presence.

In the premises previously known as Aldgate Providore, Fred Eatery owners Todd Langley (ex Lion and Oxford Hotels) and Aaron Bond (ex Epicure SA) have added their stamp to the main street using the bold colours and strong branding and have plans to completely makeover the double-storey building.

“The coffee machines will be moved to the front with high bars and banquettes for ‘coffee and go’, and the dining space will be at the back,” explains Langley, who manages the stoves while Bond looks after front-of-house.

The menu offers both healthy and hearty all-day breakfasts, such as Fred’s Bircher with chia seeds, mulberries, pistachios and rhubarb, and locally smoked Noske ham and eggs. Tasty lunch dishes include the Reuben sandwich and double-cooked pork-belly salad. They serve local beer, wine and cider from Prancing Pony, Murdoch Hill and The Hills Cider Company.

Langley and Bond had their eye on the Aldgate café space after having breakfast there late last year. “Then it popped up for sale; it was meant to be,” says Langley. “I believe in timing.”

Grant Baldwin and Jen Rustemeyer’s film Just Eat It: A Food Waste Story investigates how much of the food people throw away is actually still good enough to eat.

Following on from their previous environmental film The Clean Bin Project, Baldwin and Rustemeyer explore the world of over-consumption, avoidable wastage and dumpster diving while living solely on food waste for six months.

In an era where surplus food is common, with 50 per cent of food between ‘food and fork’ sent to landfill, the pair also expose attitudes towards buying food, highlighting the difference between what is edible and what is considered edible to the supermarkets.

“We know that poverty and food insecurity is a reality in South Australia, as it is right across the country. Two million Australians rely on food relief each year while some $8 billion worth of food is wasted,” says James.

“While the amount of food that we are rescuing each week continues to grow, so too does the demand for our services. We have 25 charitable agencies on our wait-list for new deliveries and we get more inquiries every week.”

Just Eat It: A Food Waste Story will be screened at Adelaide’s new environmental hub, The Joinery, on November 27, with proceeds going towards the work of OzHarvest Adelaide’s perishable food rescue operations. Bring a plate to take part in the shared community dinner. More information and bookings  here. 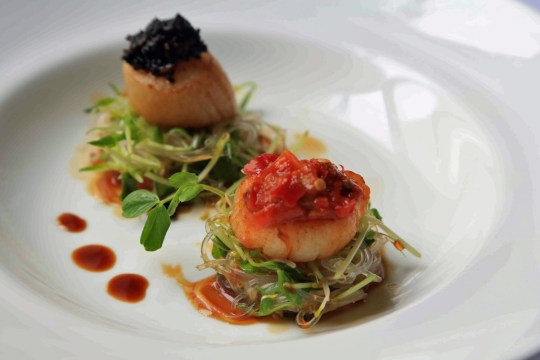 Head chef Mr Zhou and his team at the Pirie Street eatery have designed an eight-course menu with each dish paired with a premium wine from Coonawarra’s Reschke Wines.

A highlight of the menu will be a dish of pan-seared scallops with fresh sweet and sour crispy noodle salad served on house-made sweet soy sauce paired with a glass of Reschke Pinot Gris 2012.

The menu will be offered for a limited period and costs $95 per person ($145 including wine). 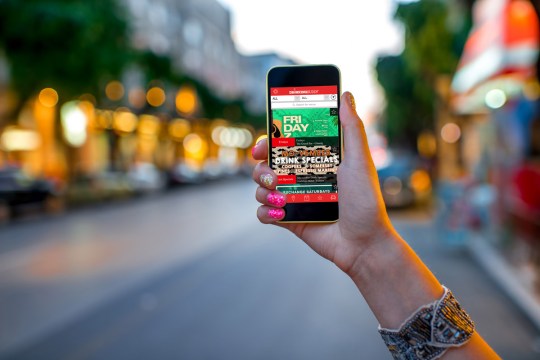 No, Drinking Buddy won’t listen to you crying in your beer or agree with your drunken slurs, it’s actually a free-to-download app and website offering more than 400 meal deals and drink specials.

“With over 40 venues and 3000 current users, the new app has everything you could want for a great night out,” says Drinking Buddy director Josh O’Shaughnessy. 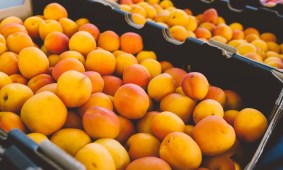 Fresh at the markets: Apricots

“Users are now able to receive live notifications when they enter their favourite venues, while still being able to discover the best meal deals, drink specials, and event information.”

While you are waiting for the application to finish downloading, check out this website to learn more on how to drink responsibly.