Kua Bistro and Rooftop Bar, at 27-29 Gilbert Place, is the latest project of Sonia and Ivan Pichardo, who this month announced the temporary closure of their popular Maiz and Mezcal restaurant on Magill Road as they prepare to open their new “baby” in the coming weeks.

The transformation of the 560sqm, two-level Gilbert Place premises – next door to Hains & Co bar – has been a labour of love over the past 12 months.

“This building was absolutely in shocking condition,” says Ivan.

“It’s got a heritage facade and the landlord has wanted to do something like this with it for the past 15 years. He never got anyone crazy enough to do it until he found the Mexicans!”

A complete renovation and fit-out was required. Six interior walls have been removed and a new staircase, kitchen and bathrooms added for Kua, which will comprise a main dining space with seating for 60 people, an alfresco laneway area with tables and a bar which leads through to Peel Street, a small deck at the rear, and a rooftop bar with city views.

The design, by Mexican firm Ochoa Architects, will blend colourful modern features with the building’s heritage elements, which include restored original bluestone walls in the rooftop bar and upstairs floorboards more than 100 years old.

“We like the dichotomy of having an old building, an ancient culture [from Mexico] and something more modern … you can be authentic, traditional, but at the same time modern and vibrant,” Ivan says. 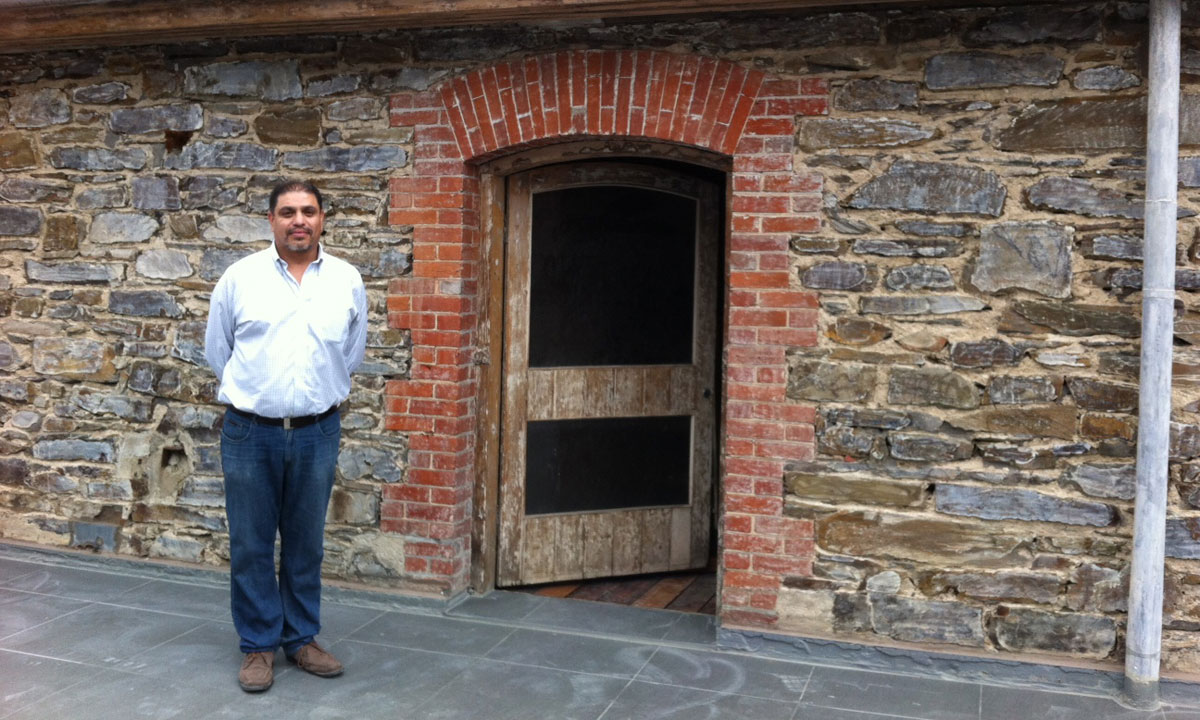 Ivan Pichardo on the yet-to-be-completed rooftop bar. Layers of plaster on the wall behind him were chipped away by hand with a small hammer to reveal the bluestone beneath.

The Pichardos, who moved to Australia from Mexico 10 years ago and have been running Maiz and Mezcal for the past five years, say the food at Kua ­– which means “eat” in the Aztec language – won’t be the “Tex Mex” cuisine many are used to.

Mexican chef Ricardo Plazola – who has worked in kitchens in Miami, New York and Spain – has created a menu Ivan says is in line with what you might see in a contemporary restaurant in Mexico City, but with unique touches that reflect Plazola’s “avant-garde” style.

“It is like rescuing the basic Mexican ingredients such as corn and chilli but with a twist of these modern techniques that chefs use now to create unbelievable dishes with flavours that are just magnificent,” Sonia adds.

Menu items will include a pan-seared chicken breast with mole (a rich, complex sauce made from more than 35 ingredients including chilli and chocolate), a tamale dessert (made with masa – corn dough – steamed in a corn husk and featuring a surprise sweet filling), and pulled pork based on an ancient Mexican recipe but served in a wonton.

A dish that perhaps best typifies Plazola’s signature style will be the grilled salmon in a reduction of mandarin/orange with cherry tomatoes, zucchini flowers, smoked baked beans and honeycomb.

“The flavour is unbelievable,” Ivan says.

The cocktail list will be equally exciting.  Designed by Mexican drinks company Barra 57, which will also train the local bar staff, it will include some cocktails based on tequila, but with the addition of other ingredients such as Mexican liqueur Ancho Reyes (made from chillies), South Australian gin, and house-made infusions.

Kua’s version of an espresso martini will combine Ancho Reyes, Spanish liqueur Licor 43 (which has vanilla, citrus and caramel flavours), vodka and coffee.

“The cocktails we have will be very unique – you can track the roots from Mexico City to Adelaide,” Ivan says.

An architectural rendering of the design for the walls of the Kua bistro interior.

Once Kua Bistro and Bar is up and running, Ivan and Sonia plan to re-open Maiz and Mezcal at a new, as-yet-unknown location, where they say it will continue to offer traditional Mexican street food but on a smaller scale.

Meanwhile, they hope South Australians will embrace the concept behind their new restaurant – and not be too disappointed that there are no nachos or burritos on the menu.

“This will be stretching the boundaries once again and I think that will be our biggest challenge,” Ivan says.