But he prefers beer to fish.

“When I started out, I thought I could make the world a better place by making good beer but after a few years I realised that I could achieve far more by inspiring people to become brewers and help them to establish craft breweries,” Nelsen says.

After completing an Applied Science degree at the University of South Australia in the early 1990s, Nelsen’s passion for beer took him to Germany, where he studied brewing before working his way across the United Kingdom.

Back home, he has been a brewer at some of South Australia and Victoria’s pioneering craft breweries, including Mildura Brewery, Gunn Island, the Port Dock Brewery and Brew Boys, which he founded with Simon Sellick in 2008 across the road from Regency Park TAFE.

“I’ve done other jobs here and there in plumbing, refrigeration, mining, lab work and labouring – it pays to be a jack-of-all-trades – I even did some furniture removal work between brewery gigs at one stage,” Nelsen says.

But for the past decade the 47-year-old has driven TAFE SA’s brewing program, first establishing the 600-litre Regency Park teaching brewery before starting brewing courses in 2008.

“I started out with part-time, out-of-hours amateur courses and slowly built towards where we are now, and there’s a great need for more,” he says.

“Now we’re at Certificate III and I want to turn that into an apprenticeship, which lasts a year with placements. I also see a need in Australia for higher education (university-trained) brewers.

“The guys from Big Shed Brewing, Jason [Harris] and Craig [Basford], were in my first ever group of mash brewing for amateurs – they’ve gone on to bigger and better things – and Frank [Samson] from Prancing Pony was in a mash course early on, too.”

The courses are now receiving national attention. Last year alone, seven of the 27 Cert III course participants travelled from outside of South Australia to take part.

Nelsen says almost all the interstate participants have returned home to start their own breweries or work in commercial craft breweries, including Gage Roads and Modus Operandi.

“They can come over and get their certificate with minimum contact hours by doing a fortnight on and a fortnight off twice and they’re done,” he says.

“The requirement for brewery operators and workers is so big that anyone with even a low-level qualification is getting a job.”

When Nelsen is not lecturing at TAFE, he helps beer start-ups establish their breweries and set up for commercial businesses. While this dates back to the mid-2000s and includes more than a dozen breweries in South Australia and Victoria, some examples of his more recent work include Port Lincoln’s award-winning Beer Garden Brewing and Forktree Brewing in Carrickalinga.

“I don’t see myself as a teacher; I’m a brewer. My dad worked at SA Brewing all my life growing up so I know the ins and outs of breweries.

“Setting up craft breweries, writing recipes, sourcing equipment, troubleshooting, layouts is what I like doing.” 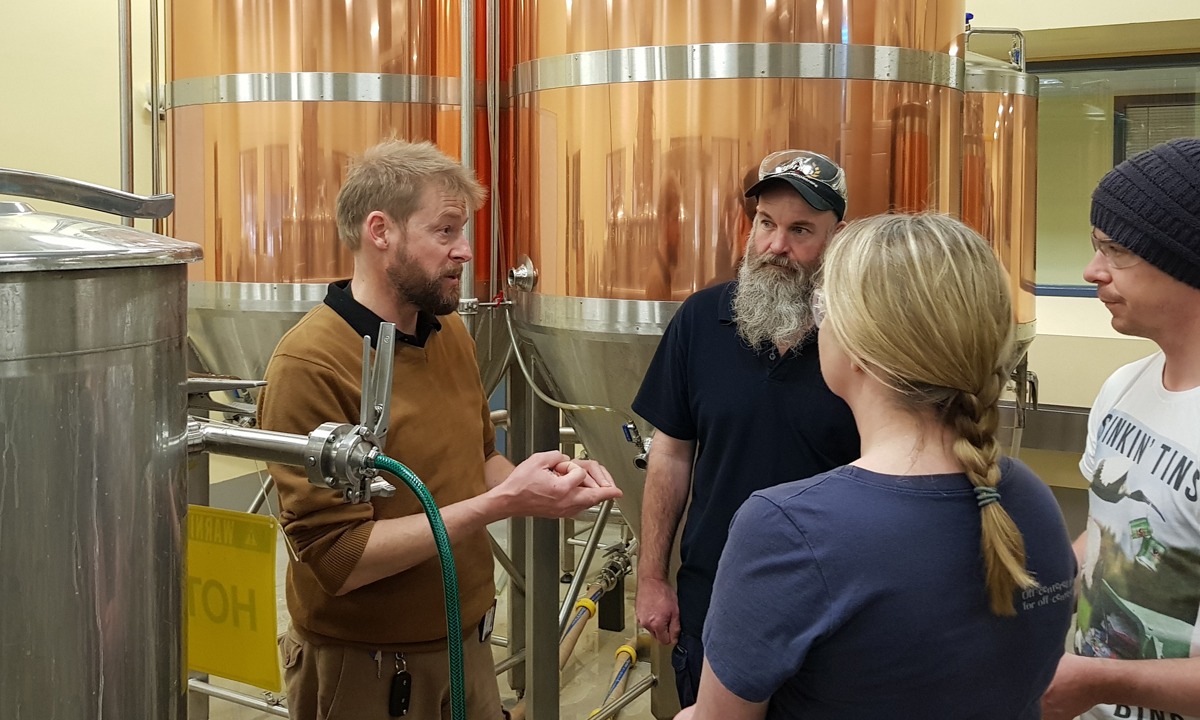 The six participants of the latest boot camp include a Western Australian archaeologist who is thinking about opening a microbrewery, a Coonawarra winemaker broadening his skills so he can help a brewing friend, a South Plympton home brewer looking to turn his backyard operation into a commercial venture and a homebrew shop owner who has just become head brewer at a new brew pub in Port Pirie.

“This is my crash course and I’d be confident that at least three-quarters of these people will be working in the industry within a year,” Nelsen says.

“They’re newcomers but some people have done this week and gone, ‘Wow, it’s full-on but I want to know more and they’ve gone into the Cert III qualification.”

By day three of the course the students are brewing a punchy New England IPA and Nelsen is putting them through their paces as if they are junior brewers or cellar hands in a commercial operation. His no-fuss attitude can almost seem blunt at times as he refers to the students as his crew and they simply call him Nelsen.

Beers made by students under the Campus Brewery label are sold by the six-pack at the Regency Park campus, and an Americano Black IPA made by students earlier in the year was awarded a silver medal at the Royal Adelaide Beer & Cider Awards this month.

Nelsen and his students are no strangers to success at the awards, winning the Best Beer in Show Trophy with their 10/10 Stout in 2013.

Six former students representing various commercial breweries took to the stage to collect trophies at the 2018 Royal Adelaide Beer & Cider Awards, including the team from Beer Garden Brewing, which took out the Champion IPA and Champion Wheat Beer trophies.

“It’s incredibly inspiring for me to have played a small part in it,” Nelsen says.

“I’m getting floated by the rising tide of craft brewing but everything comes in cycles and waves so there will be a shake-out in Australia at some point.”

Until that time comes, Nelsen will keep fishing for ways to inspire the next batch of award-winning craft brewers.