A pair of pale blue Bakelite salt and pepper shakers hide at the rear of the breakfast shelf in my pantry.

Dwarfed by the Vegemite, honey, peanut butter and jam, they rarely come out, overshadowed by the much brasher modern pepper grinder and sea salt flakes.

But those shy shakers have a significance that belies their size. 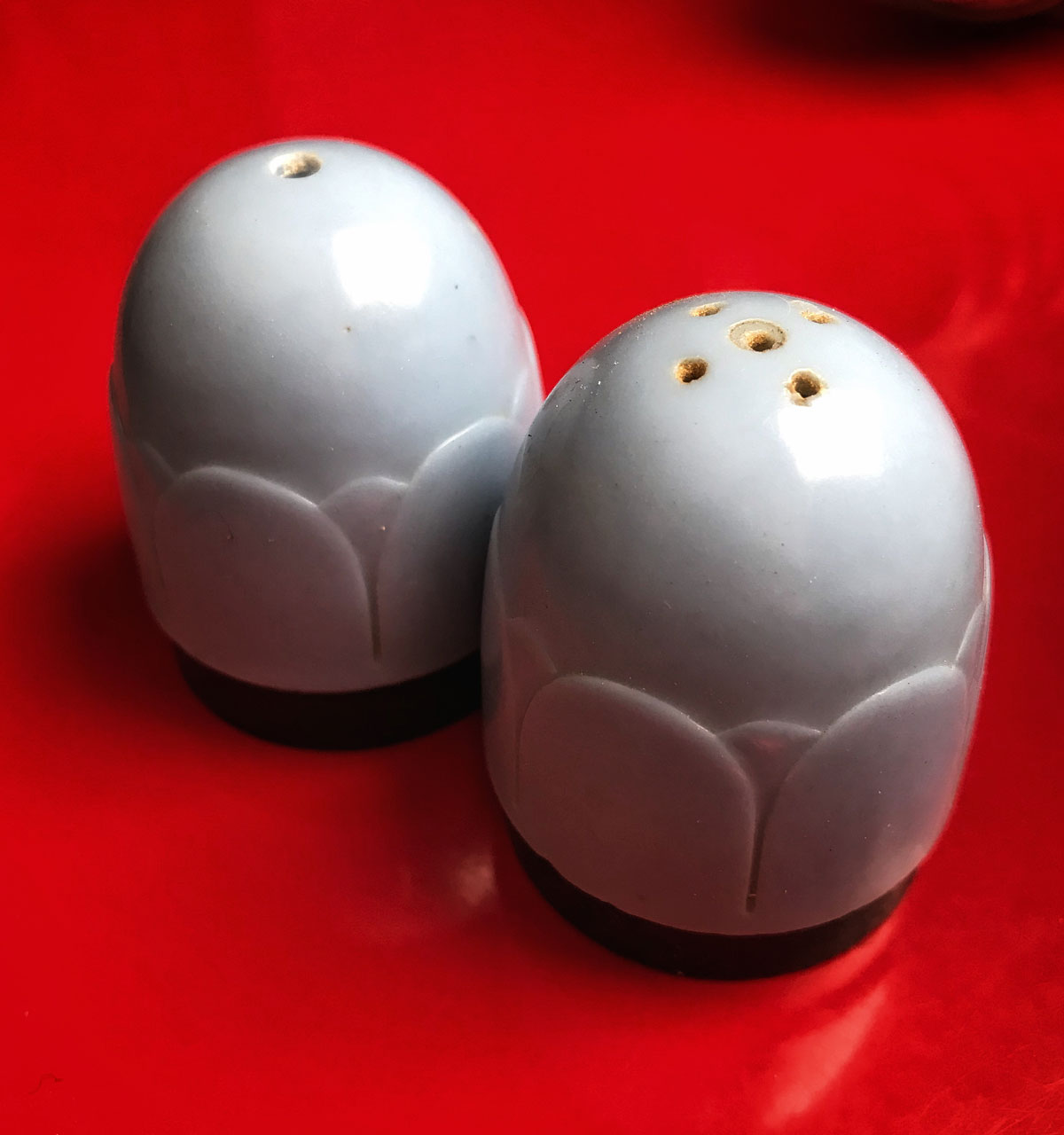 A regular feature on the dinner table when I was growing up in country New Zealand, they always trigger a smile. For reasons unknown, I mostly associate them with tomato sandwiches on sliced white bread (was there any other type?) with an artery-hardening layer of butter and a generous shake of seasoning.

Equally treasured is a battered recipe book full of Mum’s hand-scrawled recipes, mostly for classic Kiwi cakes. Testament to her lifelong love of baking (a kitchen with empty tins was unthinkable), it encapsulates as many happy memories as any photo album.

Adelaide cookbook author Liz Harfull, who shares a favourite scone recipe below, also grew up on a farm with a mother who could cook up a storm and ensured family, visitors and workers alike were never left hungry.

Other contributors to this two-part article have equally vivid food memories: Damien Coulthard of the Warndu native foods business recalls finding witchetty grubs with his Pop and making damper with his Nana on Adnyamathanha country in the Flinders Ranges, while Hilton Adelaide chef Brent Assam tells of cooking seafood over a braai at the beach in Durban, South Africa.

Kutchi Deli Parwana co-owner Durkhanai Ayubi’s food memory revolves around making bolani (Afghan flatbreads) with her family; for chef and cooking teacher Rosa Matto it is the cure-all chicken brodo made by her mother (whose hands feature in the photo above); and Thai chef Nu Suandokmai explains how his father taught him to roast a chicken inside an empty oil tin surrounded by a fire of rice stalks.

Six foodies, six stories and recipes – all testament to the universal and lasting impact of shared food gathering, cooking and eating experiences.

Writer Liz Harfull has a keen interest in food heritage.

Writer Liz Harfull has long had an interest in Australian country show cooking and community cookbooks – not just the recipes, but the stories and traditions behind them. She has written two books on the former, and her most recent book – Tried Tested and True: Treasured recipes and untold stories from Australian community cookbooks, from which the recipe below is extracted – came third equal in the food heritage category of the international 2019 Gourmand Awards.

“If you asked me to choose one recipe that stands out as an Australian country classic it would be scones. They are a farmhouse favourite and, in the deft hands of the CWA, raise significant sums for charity,” she says.

“My mum, Elaine, wasn’t a member of the CWA but scones were her go-to recipe when visitors showed up unexpectedly for afternoon tea. It happened frequently on the farm at Mil Lel where I grew up, because of her reputation as an excellent cook.

“While neighbours, friends, family and the occasional stock agent crowded around the kitchen table, she would whip up a light, fluffy batch in a matter of minutes and serve them wrapped snugly in a clean tea towel to keep warm.

“Scones are my go-to recipe too, having learnt the knack from Mum, and then practising it endlessly during summer, when I took harvest leave from school. We made dozens almost daily for workers bringing in the oaten hay crop, cutting large slabs of dough into squares with a sharp knife in a production process that had no time for fancy scone cutters.

“Traditional Scottish treacle scones were never on the menu but they are a personal favourite. I discovered the original version of my updated recipe in the CWA Cookery Book and Household Hints from WA, which has been a bestseller for more than 80 years. Flatter than other scones, they are especially delicious with orange or mandarin marmalade.” 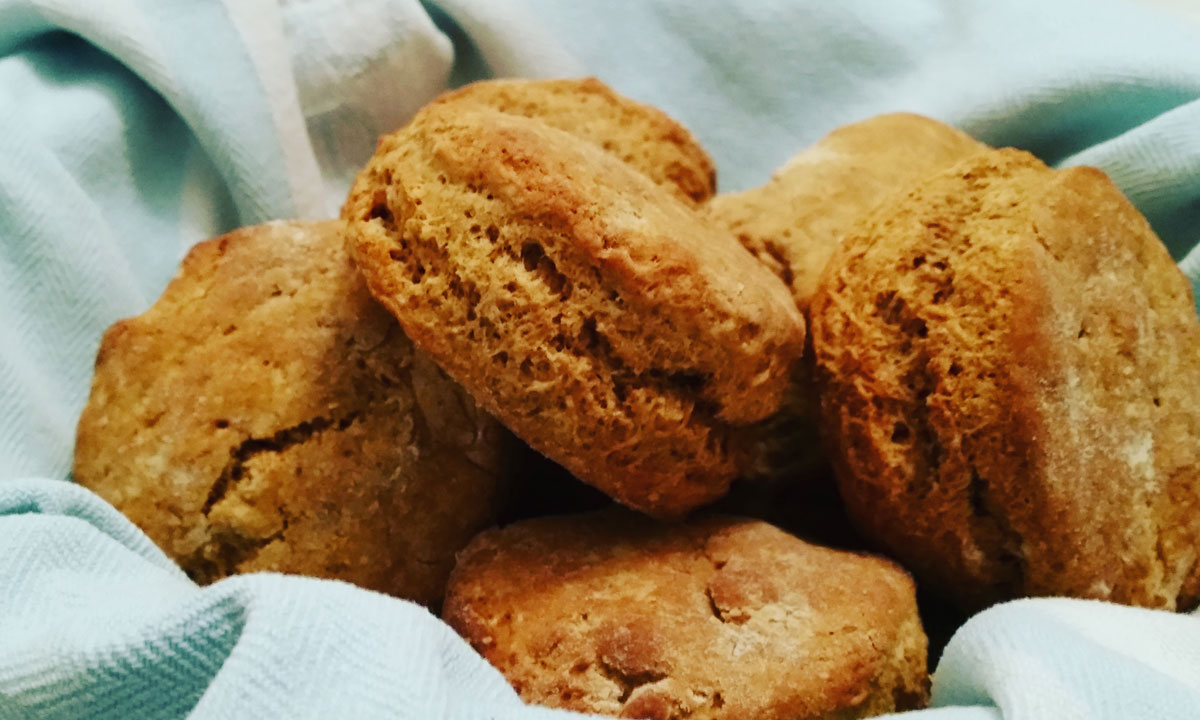 Delicious with marmalade: Treacle scones, from Tried Tested and True.

This spread Liz Harfull’s mother made for her sister’s 21st birthday in 1970 is testament to her cooking skills.

Sift the flour, cinnamon, bicarbonate of soda and the salt together in a large bowl. Rub in the butter until the mixture resembles fine breadcrumbs. Stir in the sugar.

In a small bowl, whisk together the treacle and buttermilk until combined. Make a well in the centre of the dry ingredients and add the buttermilk mixture. Stir together using a knife.

Put the scone dough on a lightly floured board, then knead very lightly until it comes together. Press the dough flat with your hands, until it is about 1cm thick. Use a plain round cutter (approximately 6cm) to cut out the scones, then place them on the baking tray. Bake for about 10 minutes, until golden and they sound hollow when tapped on the bottom.

Out of Africa – Brent Assam

The first food memory that immediately springs to mind for Hilton Adelaide executive chef Brent Assam revolves around the braai – a barbecue cooked over charcoal and wood which holds a similar place in South African culture that the Aussie barbie does in Australia.

Brent Assam in the kitchen of the Hilton Adelaide.

Assam grew up in Durban, on South Africa’s east coast, and says seafood was a big part of his childhood, with locally caught fish, pipis, mussels, crayfish and octopus cooked on the braai.

“Weekends were often spent on the beautiful beaches and often ended with a braai … featuring our ‘catch of the day’. And not far from many South African homes is the peri peri sauce,” he says, in reference to his recipe for grilled octopus with peri peri vinaigrette (below).

“Portuguese settlers in Africa came across the ingredient – an African bird’s eye chilli – and made a marinade with garlic, red wine vinegar, paprika and other European imports. Five hundred years on, the exact origins of this recipe are still debated as both Portuguese-Angolans and Portuguese-Mozambicans claim to have created the special mix.

“Regardless, the recipe remains a celebration of the cultural legacy and culinary fusions of South Africa.”

Assam’s mother and father were both keen cooks, and he has been cooking himself since he was around 10 years old.

“I have a lot of memories growing up in the kitchen or cooking outdoors with my family … I was always in and among the whisks or the pot and pans.”

The food he grew up with has influenced the way he cooks today, not just at home (where he has a braai in his backyard) but also at the hotel, where octopus may soon be added to the menu.

“Those things you learn and pick up become part of who you are as a chef … the influences naturally come out in your food.” 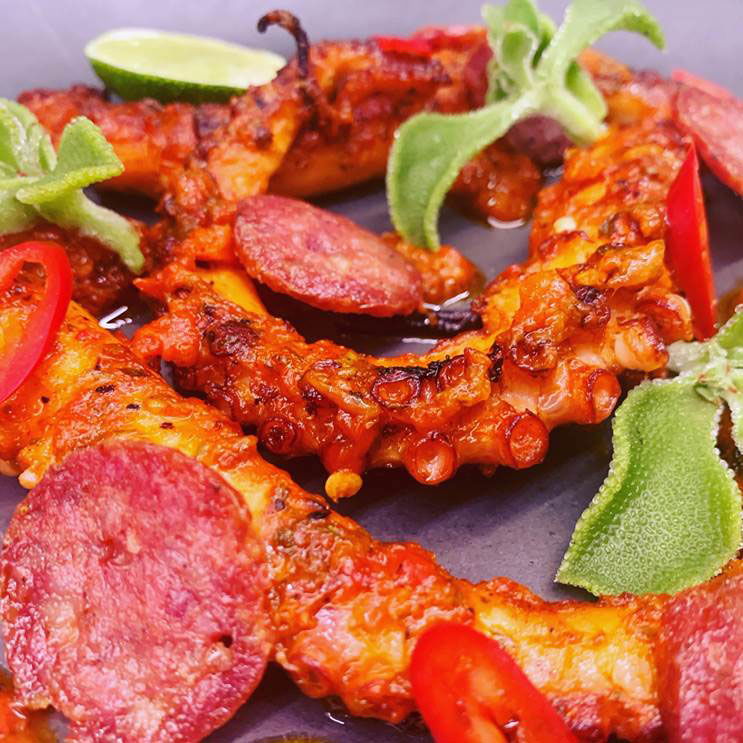 For the octopus: place all the ingredients into a stockpot, bring to a boil, reduce heat and simmer for 40 minutes. Refrigerate the octopus until chilled.

Thinly slice the chorizo and sauté in a pan.

Put all ingredients together in a pot and simmer for 15 minutes, then blend until smooth and cool.

Char-grilling and assembly: Rub some of the vinaigrette onto the octopus and chargrill over a high heat for 3-4 minutes. Serve with thinly sliced chorizo and fresh lime. 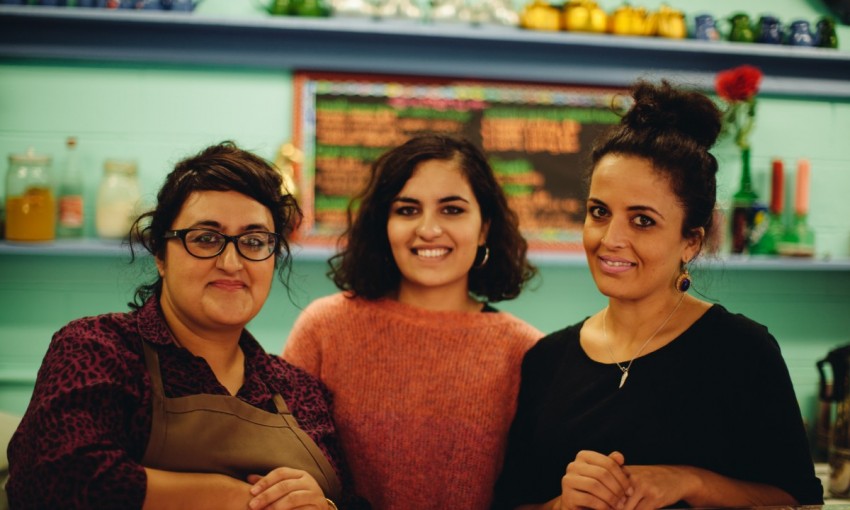 “We grew up with food being the centrepiece of gatherings and birthday celebrations – and part of Afghan food is creating the food together,” says Durkhanai Ayubi, of Kutchi Deli Parwana.

“When I think about when we were younger, the things that stand out as the most nostalgic were the dishes we would actually get together around Mum and help her make.

“The dish I most strongly associate with that memory is bolani – flatbreads stuffed with things like the Afghan leak called gandana or a lamb filling then pan-fried on a hot skillet and served with something on the side, like a chutney or herb relish that we’d make. They’re delicious.”

Durkhanai’s parents Zelmai and Farida Ayubi immigrated to Australia from Afghanistan in 1987 and opened Parwana restaurant in Torrensville 22 years later. Kutchi Deli – described as the next chapter in the Parwana story – was launched in Adelaide’s East End by Durkhanai and her sisters in 2014.

Bolani were served at Kutchi Deli Parwana for a time and proved popular. While they’re no longer on the menu, Durkhanai says they’re still enjoyed at family gatherings.

“The gandana is very traditional but my favourite was the potato stuffed one. Whatever filling you cook, whether it’s the pumpkin, potato or gandana, you spice it with things like cumin and coriander.

“The actual filling is delicious and flavoursome, and the pastry, by the time it’s fried on both sides, should be really nice and layered and crispy.” 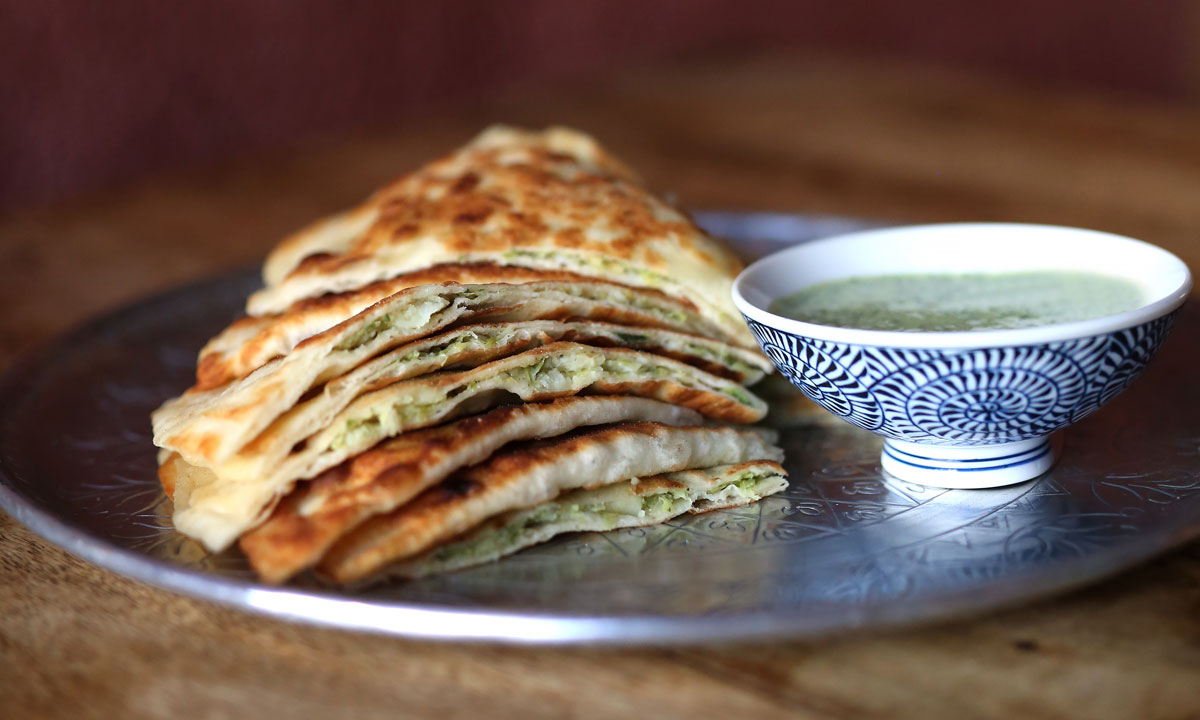 To make the dough, combine the dry ingredients into a bowl and slowly add enough water while mixing with your hands, kneading to create a firm, elastic dough.

Remember when... the nostalgic power of food

Leave the dough aside to rise for a minimum of one hour.

Divide into 10 separate balls of dough. Roll out to dinner-plate size with a rolling pin. Place the filling on half of the flattened dough, and flip over remaining dough. Knead the edges to seal the Bolani to semi-circle shape.

Place a spoon of oil on a BBQ or skillet surface and heat, then place bolanis on the hot surface to cook, flipping until both sides are golden brown.

Serve with yoghurt, or relish of choice.