This spring is dry. Last week I watched a peregrine reaching to pluck flesh from the sky over the Onkaparinga Gorge at Hickinbotham Vineyard. It seemed too hungry too early with those relentless darts and stoops across the bleak grey space: too fast for the untrained eye.

Now the vines around this cottage are shooting, the ewes with their generation of new leaping lambs have been moved away, and a few hares are coming back. The sheep seem to deter hares from nesting.

Hares don’t dig burrows. I watched two boxing the living shit outa each other on a headland yesterday. They fight like kangaroos, up on the hind legs. They’ll bash away for a few minutes, then take a break before the next round. Once one male is clearly dominant, he’ll then move on the female they’re competing for, and if she’s not in the mood she’ll be up on her haunches boxing the rampant bloke.

I can smell their wild perfume. Their social media would be sumpin else.

When the sheep leave, the spur-winged plovers, or masked lapwings, also return. Like hares, they make a sparse nest on open ground, and if the parents weren’t there with their vicious ack-ack-ack swooping, one could easily step on their freckled eggs.

There’s been a flush of quiet pride locally with the return of the southern brown bandicoot to these Kangarilla hills. This little critter hasn’t been seen here since the Ash Wednesday bushfires of 1983, but they’re back, gradually snuffling down the creeklines, following the sand. This means the feral cats are finally in decline.

I suspect the foraging bandicoots are happy to find places like this, which have been free of glyphosate for years.

Similarly, we’re seeing echidna back on the patch. One rather belligerent local called Spike freaked the life out of the lab cleaner when she interrupted it beneath a bench in the winery next door. Why it would venture so far across that vast concrete apron into the clinical sanctity of a laboratory beats me. 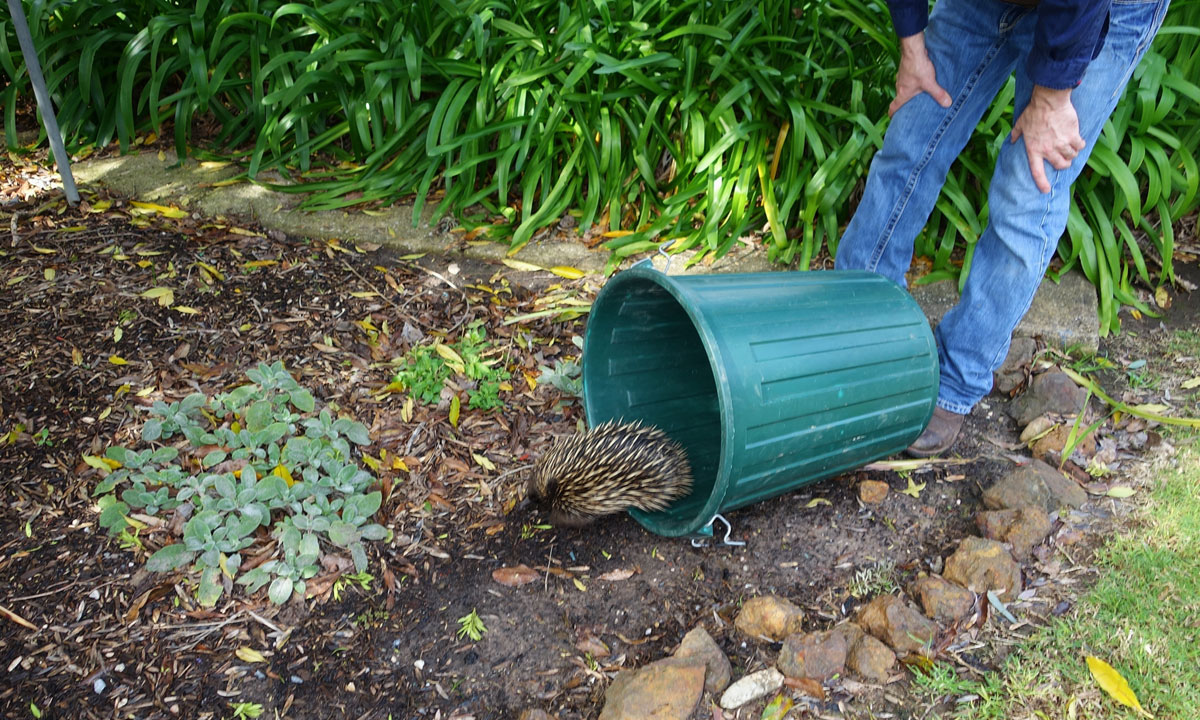 Home on the Grange: Spike the echidna. Photo: Philip White

Looking for a red?

The western grey kangaroos are rabid. There’s a ghetto of about sixty in a red gum coppice on the fen across the track. Many more than normal. They are big, hairy and confident, and the blokes are scary. They’re always bashing each other, too: it seems the dominant buck doesn’t stay king too long.

Bacchus only knows what sort of a mess they’ll make if the dry continues. In the ranges, they’ve eaten so much of the understory vegetation that the tiny critters, the hopping mice and wrens that usually live and shelter there, are under very real threat. Within a month or so, the only green vegetation in many locations will be vines.

The koala, meanwhile seem happy. They keep to themselves.

I live on a ridge between two creeklines, which have not really run this year. Usually, with sunny warm days like this, they’re screaming with frogs, especially when the Moon’s full. Uh-huh. Not this time. While one can usually measure the health of the red-bellied black snake population by the intensity of this frog frenzy, today the vipers will be waking from their winter snooze to find no Cuisses de grenouille au beurre aillé et persillé served with the rosé.

And this year the field rodents are noticeably absent, so who knows what the red bellies will eat.

This year, the ground isn’t “making water” like it usually does. Photo: Philip White

Flora time: as well as that brisk bouquet of drying meadow, the season is also marked by its early proliferation of allergens: the stolen breath business is thick and startling. These irritants are both natural and otherwise: while I’m always wary of the male brown sheoak and the cursed golden wattle, “the emblem of our land, you can stick it in a bottle, you can hold it in your hand”, it’s the odd waft of wind-blown chemical spray that gets you while traversing the roadways. My sniffles and gasps are immediate responses to whatever’s on the air as we pass. This delight usually arrives later in the year, with the cursed olive blossom.

I thought of this passage of the zephyrs and their various contents in a car yesterday as we drove through pretty springtime florals to sudden hits of stock dung, acrid roadkill roos and then aggro pollens and human-spread irritants. Not going for sympathy, but it’s like a Space Odyssey, suspended out in here in a realm where I struggle to identify them, and in the case of wine, describe their aromatic wiles and allure in a language which has very few words specific to flavour or aroma.

In this line of work, we are forced to resort to simile and metaphor when wrapping English around a task it was never built for.

Even further off the track, another highlight of this strange season’s been watching Moët Hennessy Louis Vuitton (LVMH), that vast luxury champagne, liquor, perfume and fashion house, spend a squillion on its current attempts to photograph aroma in a big vid campaign promoting its latest fragrance.

It’s obvious Emma Stone’s journey in the old Merc sports doesn’t take her through a waft of sulphur spray or old buck roo piss on the roadside, but I reckon they’ve done a pretty good job of visually triggering the sense of an array of pleasing aromas.

I’m not in the business of promoting expensive perfumes yet unsmelled, but I wonder how many hints of fragrance you can count in these very cleverly sophisticated images?

They evoke a long list of wines in my post-perfume brain. Mainly white.

Now for the smell of ripe wombat.