Just over 40 people did that on Friday as Tasting Australia kicked off with the first of three Tasting Australia Airlines (TAA) flights to three of South Australia’s most spectacular gourmet destinations – Mayura Station in the south-east, Coffin Bay (last Saturday – and booked out) and Kangaroo Island (on April 20 – and also sold out).

The flights, possibly the first of their kind in the world, are as audacious as they are costly ($550pp), but by the end of the day no one was complaining about the value.

Although it was Friday the 13th, those on board Alliance Airlines’ 50-seat Fokker F50 didn’t feel the slightest bit unlucky. Within 15 minutes, with the Coorong just off the starboard wing, they were sipping d’Arenberg’s Pollyanna fiz. According to dArenberg proprietor Chester Osborn, the Pollyanna Principle is the tendency for people to remember pleasant times more accurately than unpleasant ones. This would be a day to build up a fair bit of positive credit.

The flight to Mt Gambier took just over an hour, with another hour-long coach ride to the 3125ha Mayura Station, not far from Millicent in the heart of the Limestone Coast wine region from which wine columnist Nick Ryan would source wines for the lunch.

Naturally everyone was shown what wagyu beef looked like on the hoof. Mayura Station has around 8000 wagyu beef cattle, making it one of the largest pure-bred wagyu growers in the world. It’s a smallish Japanese breed, jet black with delicate features, rather pretty for a cow. No one really wanted to remember that later as they marvelled at cuts of deeply-marbled beef.

Although raw wagyu beef looks uncomfortably fatty, Mayura owner Scott de Bruin is quick to point out that wagyu fat, unlike other types of beef, is high in good fatty acids such as omega-3 and omega-6, similar to that found in deep-sea fish such as salmon and tuna.

Like us, wagyu cattle are what they eat, and herein lies Mayura Station’s secret. You might expect these cows to feed on a carefully calculated diet of pasture grass and specially blended grains. But the finishing touch comes in their final four months when they live in the Mayura Moo Cow Motel, a five-star finishing establishment in a large barn, where each day they’re fed 2kg of Cadbury chocolate. 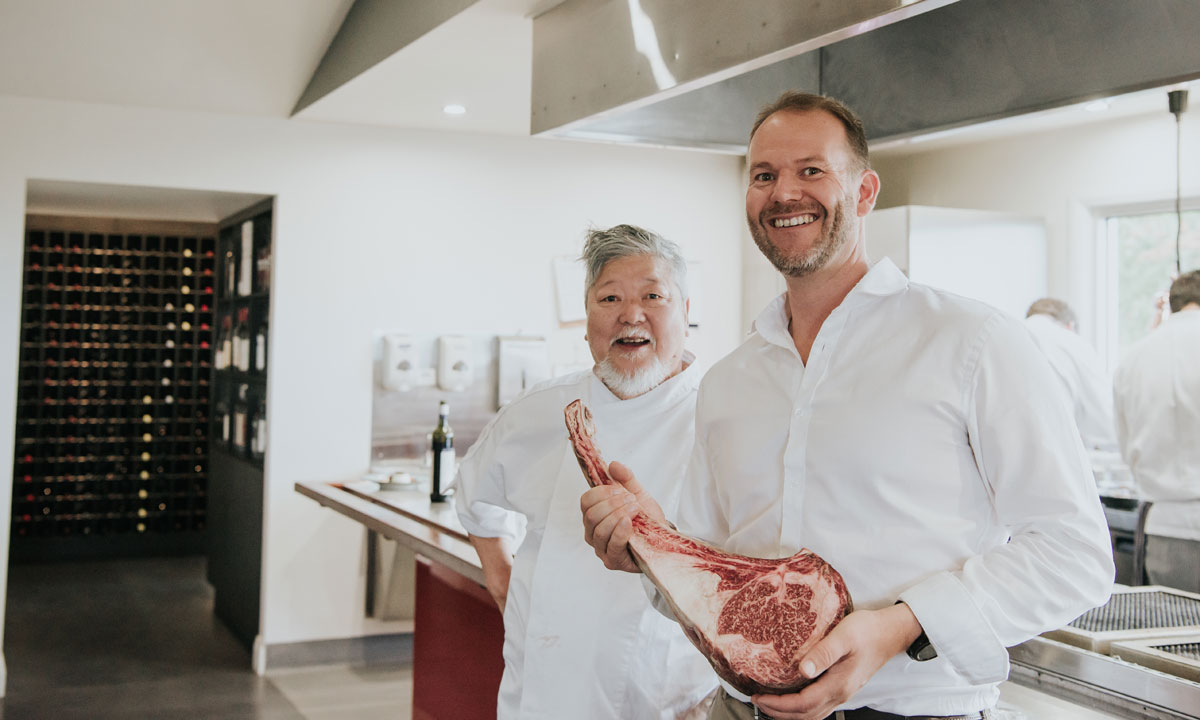 All beef is graded with a fat score up to nine. Your average bargain butcher cut might score zero, while a better angus cut might be one, and a wagyu-cross steak would be around 4.5 (which is what most restaurants sell as wagyu). For this lunch, Mayura wheeled out its finest Signature cuts – all graded at least nine.

First up was oyster blade sashimi – normally a cheaper cut that would be pretty chewy in other circumstances. Not here. There were three slices served with wasabi mayo, segments of grapefruit to offset its richness, and a sprinkle of Murray River salt – it simply melted away. Winemaster Ryan had paired it with a 2017 Ottelia Riesling and the 2016 Koonara Cape Banks Chardonnay. 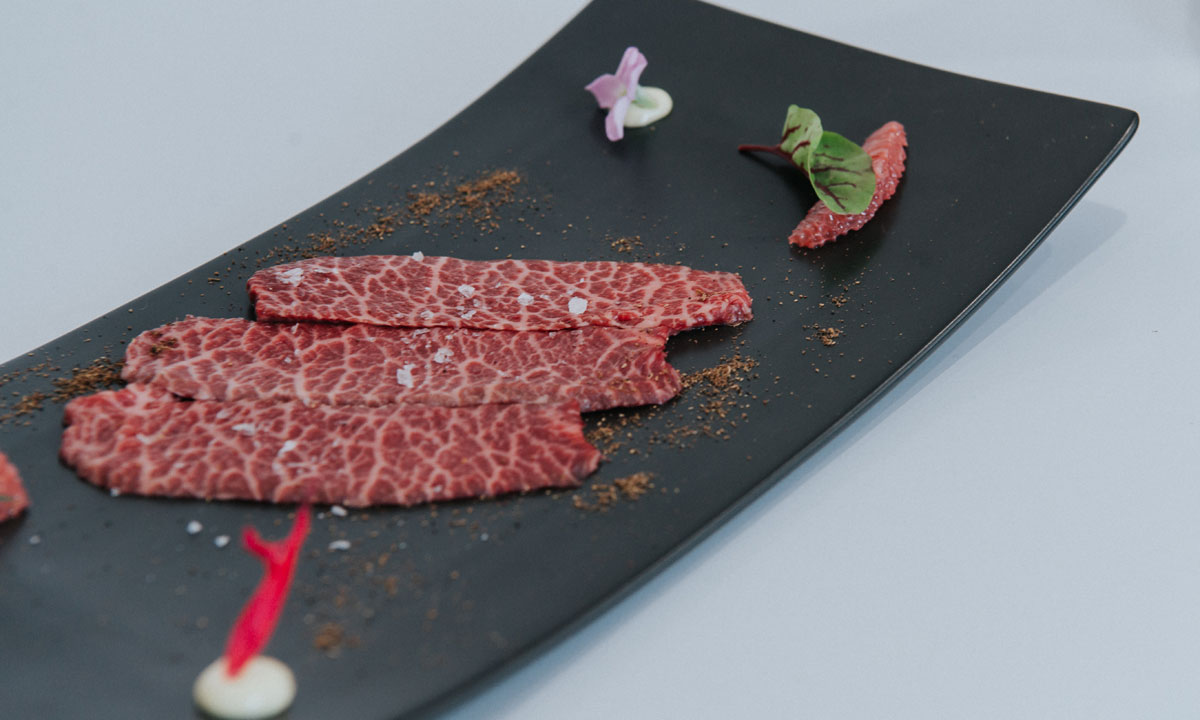 This was followed by a simply beautiful-looking plate of very rare tenderloin (fillet) on a pinot noir sauce, with a chunk of beef tendon that had been steeped in a locally-made Worcestershire sauce – which should have been chewy as anything but, like the beef fillet, could be cut with a fork. A bone marrow-filled dumpling and a sprinkle of flowers and herbs completed the dish. With it was served 2017 Punch Down Boys Coonawarra Red and 2016 Leconfield Cabernet Franc.

Third course featured wagyu zabuton – named for its shapely resemblance to a Japanese zabuton cushion, with a soft egg yolk sitting on a deeply-flavoured egg white foam, seasoned with the Japanese spice blend shichimi togarashi, and decorated with a squid ink sashimi and nasturtium leaves. Ryan could have been struggling to find wines to keep up, but the 2016 Bellwether Ant Wrattonbully Shiraz Malbec and the 2013 Jim Brand Glenroy Single Vineyard Shiraz made admirable partners.

And so to the main course, served on a wide rectangular plate, at one end various mushrooms and a slice of fig sitting on butternut pumpkin puree, at the other a 140g chunk of Mayura’s finest 9+ wagyu steak – which de Bruin revealed sells at $380 for a minimum 300g portion at Melbourne’s Crown Casino. That’s about $1.25 per gram, and rather ended any potential misgivings about value for money on this jaunt. 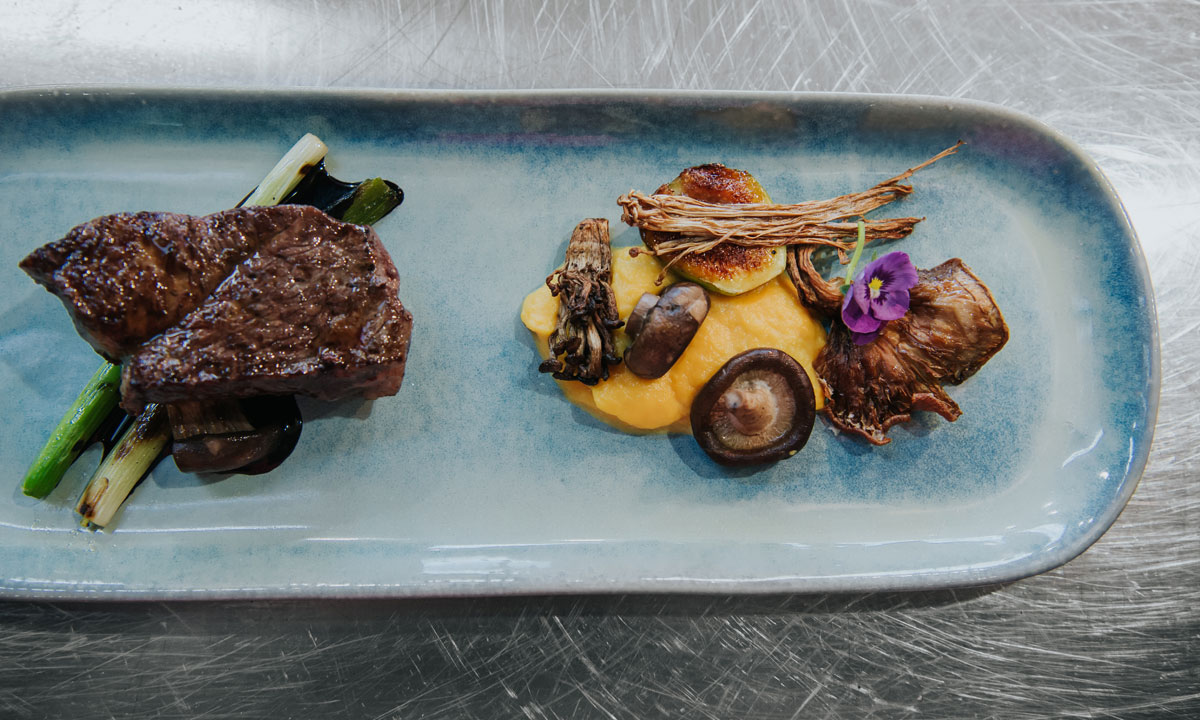 The Limestone Coast rose to the occasion with a 2006 Koonara Ezra’s Gift Shiraz and a 2015 Jim Brand Silent Partner Coonawarra Cab Sav.

After all this, 40 or so tummies somehow managed to accommodate a perfectly wobbly passionfruit panna cotta with dark berries and a yuzu-flavoured sable biscuit, with a delicious Moscato from Koonara and an aged Semillion from DiGiorgio. 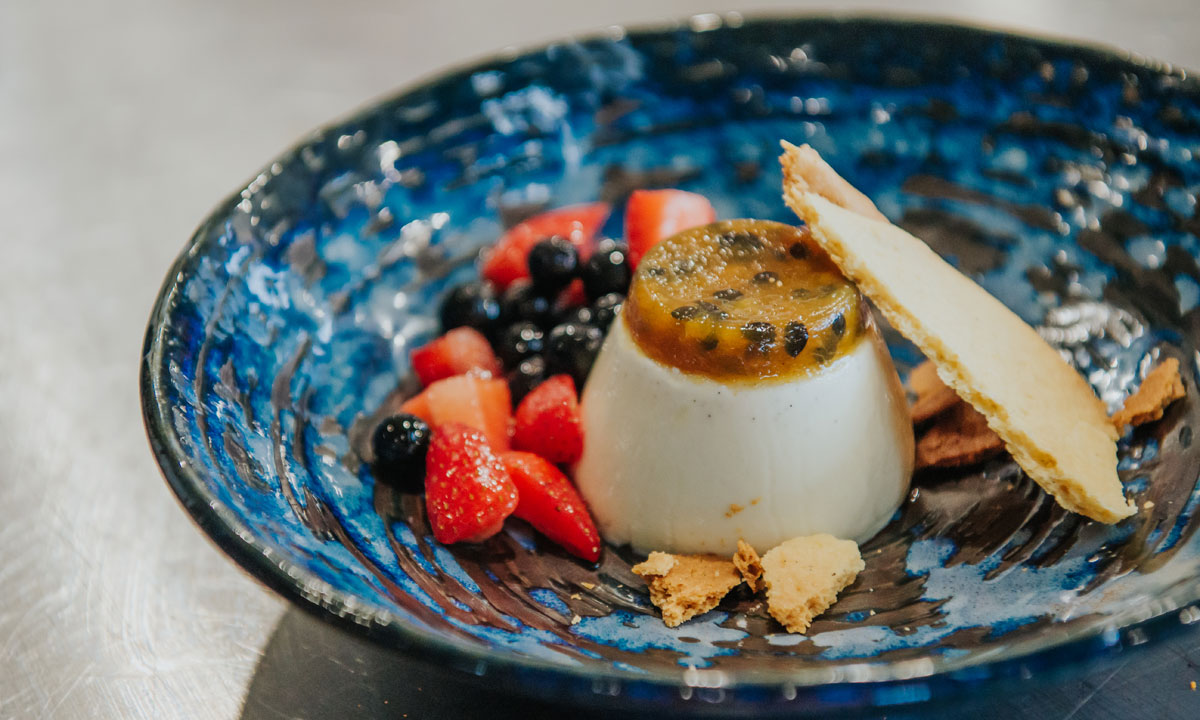 And so to dessert … the wobbly passionfruit panna cotta. Photo: Louise Agnew Photography

As Ryan had said at the start, this was not a day on which to hold back. And as one of the contented TAA passengers said in the bus heading back to the airport: “I’m glad I’m not flying the plane home.”

The TAA flights have sold out. Bad luck. But Tasting Australia has an amazing program ahead over the next two weeks.