But the bad news for people living outside South Australia is that if you want to try the award-winning Dark Ale, or any of the Smiling Samoyed range, chances are you’ll have to take a trip.

The phone has been ringing at the brewery in the small town of Myponga, which is run by husband and wife team Simon Dunstone and Kate Henning, since their Dark Ale claimed the title and two others on July 8.

“I’ve already had quite a few phone calls from wholesalers wanting to set up accounts for the dark ale,” Dunstone said.

“Last year when we won there wasn’t a lot but this year going back-to-back we’ve proven it wasn’t a fluke.”

The couple moved to Myponga and opened Smiling Samoyed on the same premises as previous breweries in November 2012 and have gradually increased production to 50,000 litres a year, which is sold at the brewery and almost exclusively through independent bottle shops in South Australia.

Henning said although they had the potential to increase capacity to 240,000 litres a year, there were no immediate plans to do so.

“We have taken opportunities when they have arisen – we have sent some beer into Melbourne and to Germany just when people have come to us but we don’t want to build the business in a way so we can’t supply our local market,” she said.

“Our local market’s always our priority.”

The couple – Henning a former lawyer and Dunstone a software engineer – began looking for opportunities to start a craft brewery after their home brewing hobby began to take on “a life of its own”.

“This one (Myponga) came up at a good time and we still pinch ourselves,” Henning said.

The bar inside the brewery, which offers tastings, meals and take away beer on Fridays, Saturdays, Sundays and public holidays, provides about half of the brewery’s turnover.

It is licensed for 100 people and has also hosted a range of private functions including weddings.

“If we didn’t have this then one of us would probably still be working. We’re growing the wholesale side but being open on the weekends and having people come in has been really important,” Dunstone said.

The brewery is named after Dunstone and Henning’s three Samoyed dogs, who have become much-loved mascots at the brewery.

Smiling Samoyed is one of several craft breweries on the Fleurieu Peninsula, which is also home to other Royal Adelaide Beer & Cider Awards winners Goodieson Brewery and Vale Brewing.

“You can grab a bus and visit four or five Fleurieu breweries in a day now and there’s a couple of others who are looking to start up in the next couple of years as well,” Dunstone said.

“We get along really well with a lot of the local businesses. Our spent grain goes to Fleurieu Milk, which is a successful company in Myponga, and the cows love it. We brewed last Monday and Geoff the farmer came down to get it while it was still hot. The cows know when it is coming because they chase his ute.”

Despite the Dark Ale being a winter favourite, Smiling Samoyed’s biggest sellers are its Kolsch and 12 Paws Pale Ale.

Dunstone described the Dark Ale, which contains 4.3 per cent alcohol, as a “lighter dark ale”

“It’s supposed to be one that you can have a few of in the cold weather and enjoy,” Dunstone said.

“A lot of people who don’t like some of the flavours in heavy stouts and things like that, the real roasted barley bitter type of characteristics, they’re not in our dark. 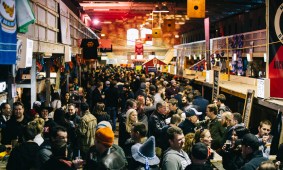 “We use a lot of specialty malts so there’s a lot of residual sweetness in there. It’s not a dessert beer, even though it does go well with a piece of chocolate cake.

“We’ve been making it since day one and before. As amateurs we placed quite highly with it a couple of years before we started the brewery and we’ve pretty much stayed true to that recipe.”

The story was first published on The Lead.