While Bundaberg pioneered dark rum production in this country in 1889 with the molasses by-product from Queensland’s sugar-cane industry, and Western Australia’s Hoochery Distillery started up in 1995 near the booming Ord River sugar-cane plantations, La Forgia was motivated to produce rum based on flavour alone.

He has released his Gunnery Australian Spiced Rum alongside his other new drink The Italians, a Campari-style aperitif. Both brews are infused with Australian native herbs and spices and Riverland citrus. 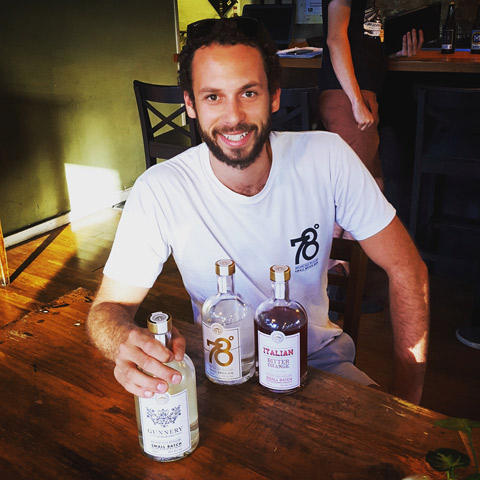 For La Forgia – who also created one of South Australia’s first boutique gins, 78 Degrees, released 12 months ago – the lack of a sugar-cane plantation near his Adelaide Hills Distillery wasn’t a deterrent to producing rum.

“I’ve been playing around with rum for a long time,” he explains. “I started distilling in the laundry at home when I was 18, so I’ve had the knowledge about how to do it for a long time.”

Rum is made by distilling fermented molasses or sugar-cane juice to make alcohol and then enhancing the flavour by ageing it in oak barrels. Spiced rum is produced by the addition of flavours such as vanilla, citrus and cloves before further distillation.

“The whole point of the craft distilling industry is looking at products that have come before that are more based on price point than quality and then producing something superior.”

“I trialled a lot of Australian native botanicals last year when I was looking at the gin and I found their chocolatey, nutty flavours matched so well with the rum,” he says.

The small batch spirit boom continues with an Australian 'Campari'

“For this first batch I had to buy in the source alcohol, but we have just bought a new still with a much larger capacity so I can make it myself,” says La Forgia.

The Gunnery is a prelude to a number of other rum releases from Adelaide Hills Distillery.

“We’ve got rum spirit ageing in barrels which we’ll crank up when the new still arrives – we will be making brown rums next.”

The name “Gunnery” is a reference to rum’s naval history, so it’s fitting that it is currently being poured at the city’s maritime-themed bar Hains & Co, as well as at Udaberri and Winston.

“It’s awesome in a Dark and Stormy (mixed with ginger beer) or a Mojito (mixed with muddled lime, sugar syrup and sparkling water), topped with dried ginger, a bit of mint and lots of ice.”