The inaugural Howard Twelftree Award was presented to radical Adelaide chef Duncan Welgemoed at the weekend. The handover took place at a surreal shedster Adelaide Food and Wine Festival dinner at Fall From Grace in Willunga.

Duncan and his crew made the food. They’d been hired well before the award recipient was decided, and were unaware of what would unfold.

The chef is best known for his remarkable Bistro Dom in Adelaide’s Waymouth Street. It was this kitchen some cobweb fools blamed for Maynard James Keenan losing his voice during last year’s Tool tour, forcing the 24-hour postponement of the Adelaide gig. I can personally assure you it was neither Duncan nor his kitchen that damaged the bullet-proof Tool voice-box. The repast the Bistro Dom crew delivered that night was memorable for its restorative wonder; the damage was committed by quite separate bacterial goings-on in the royal froat and Maynard was in exquisite scream after a day locked safely away with an appropriate spray.

For 33 years in The Adelaide Preview, and then The Adelaide Review, Howard Twelftree  wrote exquisitely of gastronomy under the pseudonym John McGrath.  He was found dead at his desk in June last year, new phone in one hand, instruction manual in the other. The award is made by a disparate mob of his friends, editors and dining allies, some almost lifelong. It will be presented to any individual who makes an exceptional contribution to the gastronomic life of South Australia. It may go to writers, chefs, waiters, architects, designers – some years we may not even make an award. Which would be a pity, but, you know, we don’t want this thing becoming too thick on the ground.

The Fall From Grace dinner was a sell-out. Gill Gordon Smith has closed her tiny wine bar in the main street of McLaren Vale and re-opened in a bigger, older, more cosy premises at 29a High Street, Willunga. The long “tasting garden” at the back has a splendid galvo shed which was bespangled with fairy lights and candlesticks and jam-packed with tables. Guests walked through the perfumed smoke of Duncan’s fiery “kitchen” as they were led to their chairs.

As well as being spectacular on the eye and nose, the affair was also decidedly evangelical.  Wine critic Max Allen was imported to preach his passion, so-called “natural wines”, which he did with much fervour, if indeed a bit short of a hard-core hot-gospeller like Billy Sunday.

One got the feeling that Max preached to the converted. There was more than a whiff of sanctimony in the night air.

Various vintners and committed naturists were there, tip-toeing through the fairy lights with unlabelled bottles of their cloudy wares, affording guests and friends wee trickles of mystery.

As I addressed my naturally orange hangover with things more unnaturally spirituous the next day, I Corinthians 2:14 descended as a sort of Heavenly salve. I quote the original 1611 edition of The King James Bible: “But the naturall man receiueth not the things of the Spirit of God, for they are foolishnesse vnto him: neither can he know them, because they are spiritually discerned.”

So there. I, too, can show God-blessed sanctimony when it’s called for. Selah. 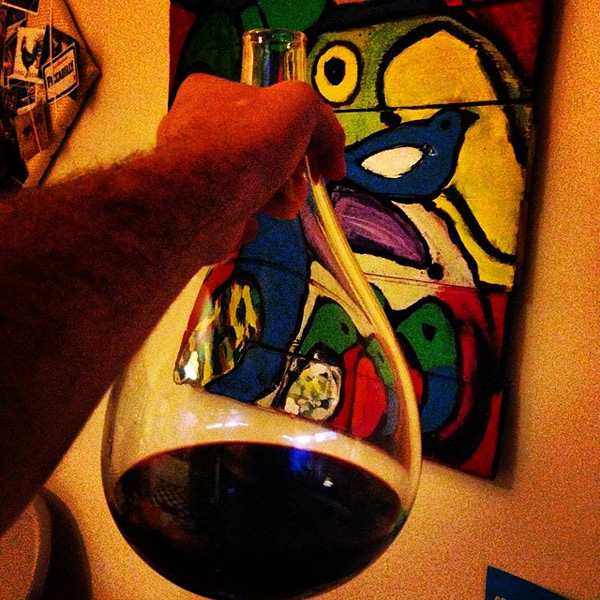 Duncan Welgemoed’s selfie of the Twelftree award decanter and a painting by Stephen Langdon.

The unwitting Duncan was caterer for the evening: his repast was delicious in the most crazy and sensitive of ways. When he was dragged from his fires to the fore, he thought we were about to applaud him for his wizardry before he’d even served dessert. You know: one of those awkward march-the-kitchen-and-floor-staff-out-for-applause-and-silly-speeches sort of rituals. So he was genuinely taken aback when I thrust a mighty decanter upon him and announced it was indeed the first Howard Twelftree Award, suggesting he should only ever use it by tipping three or four different wines in there together.

In the end, Duncan gave it the Sense of Compression Adelaide Hills Grenache made jointly by Maynard and Taras Ochata of Ochota Barrels at Basket Range. A goodly schlück.

Next day, Howard Vineyard of Nairne mounted a similarly outstanding event which was more Woodstock than hot gospel and was devoid of any wisp of Exclusive Brethren sanctimony.

I have always thought that somebody smart may someday combine something along the lines of the thriving Hahndorf Fruitaveg Market with your actual dining and some properly good wines and appropriate music. Outside, in the country.

Around 400 happy people – all ages – sat under the autumn sky and the oaks and dined, and played, and danced and drank.  And stayed all day. You could taste and purchase wines from Howard, By Jingo, Jericho, Sam Scott, and Top Note, and craft beers from Gulf Brewery and Prancing Pony. The fine food vendors included Melba’s Chocolates, Woodside Cheese Wrights, Newbury and Watson Artisan Smallgoods, and Bald Hills Olives. I even scored a jar of stunning Tarkine Rainforest Leatherwood Honey from those committed Dawesley apiarists buzzHONEY.

All these honest-to-goodness participants were local, and I got the feeling a good proportion of the polite crowd was, too.

The very smart coffee was by Myrtle & Mae, and the splendid music was by the tireless trio Ragged But Right. They sang and played an encyclopædic canon of old-time/good-time/Americana mountain music. It was just perfect for the day. There’s nothing like the bright tinkle of a well-played mandolin to lift the knees and the spirits; add to that expert three-part hillbilly harmonies and you got me.

Dogs, dads and kids chased footies, grandmas toted chocolate-smeared infants, ancient journalists sat soaking it all in – one boasting to me about never ever looking at the internet: it was indeed a bonnie and wholesome thing.

While I sat there supping, gazing and marvelling, I couldn’t cease churning over the contrast between the two events. Of course they had different purposes, and very obviously poked their barrels – or amphoræ – at quite different markets. 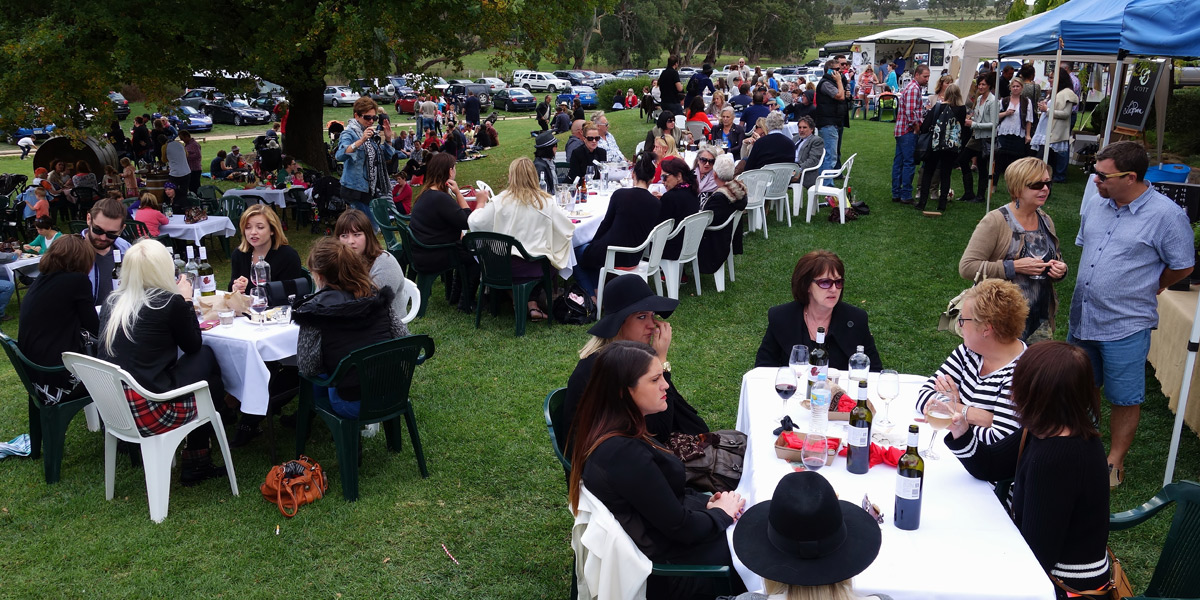 The outdoor event at Howard Vineyard of Nairne.

But, c’mon, these natural people and their murky brews … what’s the point? Sure, rebel against the gross industrialisation of the worst mass-produced wines with their mindless petro-chem. They deserve an uprising, pointed straight at ’em. But claiming that a filtered or strained wine cannot be called natural?

What’s natural about a pair of pruning snips? A basket press? A grape crusher? A bottle?

Whatter they do with their coffee? Their tea? Their potatoes, for chrissake? According to this dodgy dogma, potatoes get two levels of sin: first, they’re boiled. Second, they’re strained. Are those poor spuds not natural?

I sit with my glass of biodynamic/organic (certified) red, marvelling at its honest beauty, wondering why it’s barred from this natural word/world simply because it’s been strained. But then I’m smugly satisfied that a mob of zealots of the size and fervour of these sanctimonious murkists and orange hangover-mongers have one thing going for them. We know where they are, just as we know where the petrochem wine industrialists are. It’s a bit like the tribal mob mentality of the football. When there’s a big match on, a normal non-gang human knows where they are, in their mob-whipped fervour and regimental regalia. They are at the footy.

For those few short hours, a bloke like me can walk down the street with impunity.