While you’re planning your hangover material, Whitey suggests you begin the foundations of your new gastronomic year with his two top wines of 2013.  Terribly expensive, sure, and a dreadful tease, certainly, they’re well beyond his meagre financial grasp.  But he’s determined that they’re far and away the most memorable tinctures to flow down his little red lane in the past 12 months. Go wreck whatever’s left of that plastic: 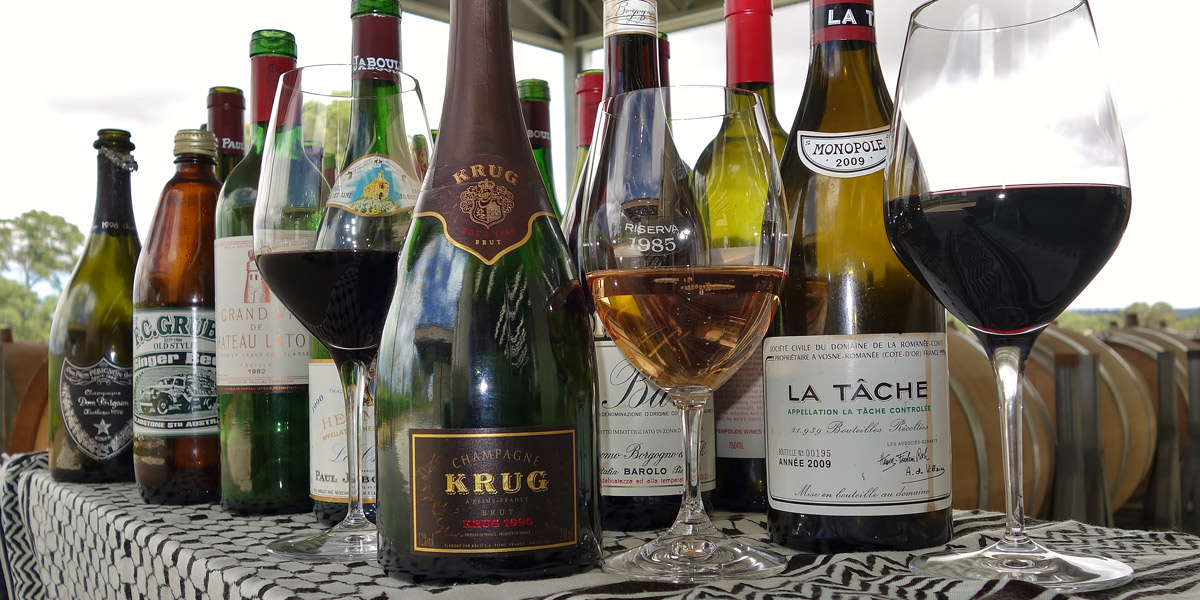 It’s two years since I first drank this exquisity; another chance at it last June showed it hadn’t budged, and my original notes pretty much say it all. I prefer its finesse to the brilliant current release, the richer 2000:

There’s an apocryphal yarn about the murderer who, upon being strapped into the electric chair, looked at his executioner and said: “This’ll teach me.” This wine always reminds me of that. I don’t really know why: the damned thing is so profoundly confronting in its beauty and intensity that the mind does go silly, in a willy-nilly, electrocuted sort of way. Thoughts fall to the floor and shatter harmlessly about the drinker: they no longer count. Perhaps it’s also the serene expectation that one will soon be found dead in one’s chair with a really silly smile and a glass, empty, clutched in a grip that makes Charlton Heston’s rifleman speech look like something uttered by a total softcock.

The smell of an organic wheatfield, almost ripe, after the lightest rain. The smell of the most delicate brioche. Hazelnut. Wet chalk. Sliced, poached almond being fastidiously placed on a perfect marzipan icing in the kitchen of La Crayere. Oyster mushroom, and enoki. I can smell it for an hour, happy to postpone the execution. But finally, involuntarily, the glass finds its way to the lips, and like all Krug, just seems to evaporate into my organs. My body. The corpuscles, the genes, the chromosomes vibrate in immaculate harmony, and purr. This must send a transmission so powerful it can be received by other life forms, billions of light years away.

Remi Krug remarked 20 years ago that he admired the way I guzzled his Grand Cuvee, rather than inhaling common air through it to make that obscene gurgling noise and spitting it like an Englishman. “But I am a Vikin, and Krug comes properly perforated with bubbles installed by the Krug family,” I responded. “It needs no other air buggering it up.” And so it goes. No need to change the technique. Gulp it down! Have it from a bigger glass! Pour yourself a tumbler! Do it again! Sell your house!

“It’s like music”, Krug pondered aloud. “There is real music, like Duke Ellington and Ella Fitzgerald. And then there is airport music. Unfortunately, too much champagne is airport music. When I met my wife, she drank the airport music, and she always said it gave her a headache and she would not marry me. So I gave her some Krug, and when she had it she said, ‘Ah, this is good, I don’t have a headache’, and so she could marry me. Of course when I discovered she did not have a headache, I could marry her. And so for many years we have Krugged along together.”

Half their Kruggin’ luck, I say.

I first drank this in 2012. A second schlück in November 2013 earned it another point. 2009 was a wet vintage in Burgundy, with the sorts of moulds and funguses that made 2011 very tricky in South Australia.  But as happened here, through fastidious bunch selection, the smartest winegrowers managed to produce exceptional wine. Despite its price hike in the meantime, my second taste simply re-affirmed these original opinions:

I know I’m gonna get a backful of silver forks for this, but I honestly wonder how many Australian winemakers would recognise this as Pinot noir. All the stuff most were taught to find in good Pinot is barely here.  Unless indicating abject derision, I rarely use capitals in my tasting notes, but on this wine they’re huge:  “NO STRAWBERRIES NO RASPBERRIES NO CHERRIES” they shout.

The secret is the La Tâche vineyard, which has been there by the Burgundian village of Vosne-Romanée for more than 800 years.  Think six hectares of 50+-year-old vines on the world’s most expensive irony limestone, pruned so hard it takes three vines to fill a bottle.  The vineyard is managed using very old organic and biodynamic methods; like Moon, horses, no tractors, and only vine-derived compost. Along with the wine from its neighbouring 1.8ha Romanée-Conti vineyard, it’s as good and expensive as Pinot gets, and is simply revered in the arcane world of the Burgundiac and Pinotphile.

This 2009 is being compared to the majestic 1990.  But if there’s no primary fruit, what makes it great?  Structure.  Tannin.  Acidity?  The most ethereal and fleeting wafts of perfume?  But really, the damn thing seemed chockers with the nightshade aromas: the dark green aromas of those leaves, as if in thick black tea.  Pepper, juniper, leather, valerian, coaldust, all sat there. Surly, glowering.  Daring me.

“Maybe the closest we get to fruit is a faint whiff of coconut butter,” I concluded, mystified.  But then, wakey-wakey: the initial glimmers of something between tart juniper berry, sweet beetroot and very bitter cherry began to stir, and long after pouring the thing had awoken sufficiently to give just a glimpse of the overt sensuality which will dominate when the juice of those very special grapes eventually matures to swell and fill the wine’s dusty, tannic whalebone corset. In, what? Twenty years? In the meantime, a good whipping would be in order before we do any mouth work.