This is the 30th anniversary performance of the well-respected SA playwright’s first work.

Colleagues Dympie (Jude Henshall), Paula (Ellen Steele) and Monika (Elena Carapetis) are out on a Friday night in a suburban pub bistro looking for fun and company. At another table, Gordon (Rory Walker) and Stephen (Nathan Page) are doing the same.

Jonathon Oxlade’s set and costumes plate up a perfect slice of 1980s Australia, the curtain rising on a very ordinary beige and avocado bistro setting that triggers a rush of nostalgia in anyone who lived through that decade. But though the setting remains precisely in the past, the laughter that ensues is in squirming recognition of our own clumsy attempts at love and human connection, which makes it as pertinent as ever.

After Dinner: I still blush at just how far I went

The five characters enter the stage one at a time, allowing us to get the full measure of each: the first few silent minutes of the play set up the slowly building pace of the comedy, inviting laughter at the antics of Gordon – whose wife has recently left him – as he waits alone at a table, fumbling with the condiments.

Bespectacled Dympie makes her entrance next, uptight in an unexceptional buttoned-up beige dress as she fusses with her bag and table settings before the glamorously perky and heavily made-up Paula arrives, resplendent in heels and a thoroughly ’80s hooded dress. Both are single, and despite their bickering and opposed personalities, share regular Friday nights at the bistro looking for fun and love.

They are joined by the newly widowed Monika, who veers dangerously between conviviality and emotional breakdown. The cast is completed by the appearance of Gordon’s wannabe-playboy friend Stephen, whose Miami-Vice-Don-Johnson flick-back hair, baggy pants and sockless feet in loafers plant us firmly in the 1980s. 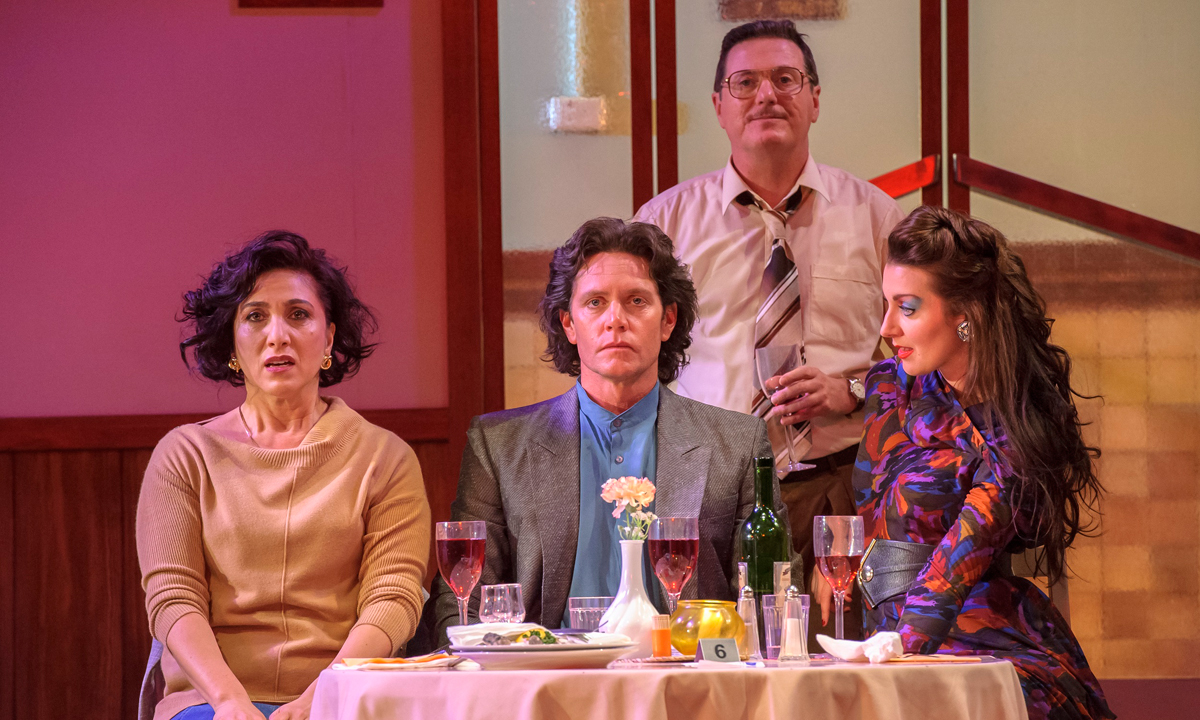 Director Corey McMahon and each of the actors ensure the performance strikes the difficult balance between tragedy and comedy with meticulously managed pacing. While the characters are in some way caricatures, McMahon secures the empathy of the audience so that it laughs not at them, but with them, and with great affection.

The subtleties of pacing and timing are key here, and the accomplished, smoothly delivered performances by the talented cast keep us riveted throughout both acts. The simultaneously hilarious and tragic monologues delivered by Monika are particularly brilliant, with the conclusion of a particularly lengthy one at the end of the first act about her deceased husband Martin inciting spontaneous applause.

After Dinner’s simple premise and bid for belly laughs belies a deeper complexity. State Theatre’s latest offering disguises the bitter pill of truth about human relationships in the sweetness of comedy, resulting in a thoroughly entertaining evening.

State Theatre Company is presenting After Dinner at the Dunstan Playhouse until April 29.