Madeleine Blackwell wrote the initial script for her first feature film in one night.

A former theatre actor turned director whose credits include several short films, she had been working on a television series with a refugee advocate and felt compelled to create a film inspired by the extraordinary stories she heard.

Damage, about a taxi driver from Iraq and an elderly woman who gets into his cab one night and forgets where she is going, was initially envisaged as a short but Blackwell turned it into a full-length feature now set to premiere at the Adelaide Film Festival on Sunday.

It is, she says, a film full of ideas.

“I knew I wasn’t able to make a vast realistic drama, so it was really about how do you communicate ideas to an audience,” Blackwell tells InDaily.

“It’s very easy to latch onto a story and go from A to B to C to D, but how do you actually communicate the deeper ideas and feeling, and explore the power of cinema to really make people think?

“So it’s not an escapist entertainment. It’s more of an arthouse film that makes you think about things, and it’s a very emotional film.”

Adelaide-based Blackwell – who wrote, directed and produced Damage herself, with the help of a small local production team – hopes the film encourages people to consider what is at risk in a country where asylum seekers and refugees are vilified and locked up. She asks: What do we sacrifice in our humanity when we allow that to happen? 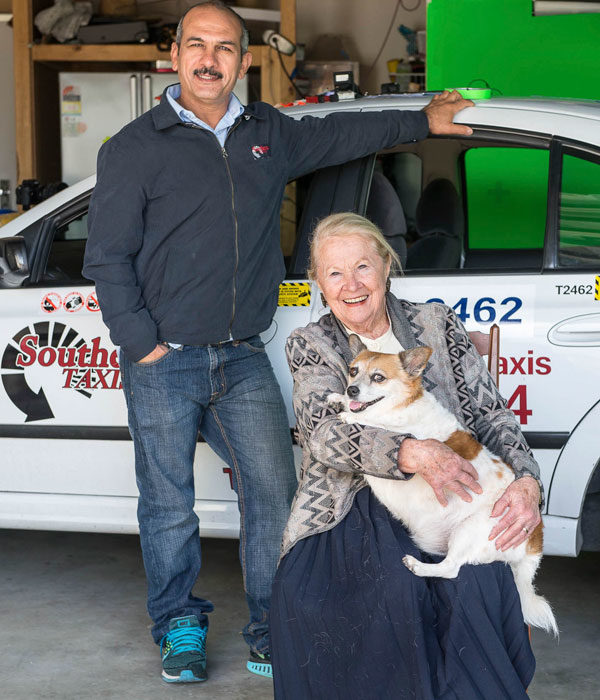 Imelda Bourke and Ali Al Jenabi with Marty the dog, who also stars in Damage.

The character of taxi driver Ali (played by actual Iraqi asylum seeker Ali Al Jenabi) is influenced by the stories Blackwell has heard about the experiences of asylum seekers, as well as people she has met who have spent time in detention centres.

The fictional Ali is not an Australian citizen and is driving his taxi on someone else’s licence, relying on GPS to navigate a city he doesn’t know.

“He is someone who has escaped a war, who has suffered immeasurable loss … his story is similar to the stories you hear about the Jews who escaped from the camps in World War II, from people who escaped from Pol Pot’s death camps.

“So many Australians have refugee stories in their families, but somehow in the last 20 years we’ve become very cold and hostile towards refugees and there’s been a lot of propaganda against them.

“This film really is a meeting between two people – one is a refugee and one is somebody who is prejudiced; she doesn’t like Arabic people, she doesn’t like Muslims and she’s stuck with a taxi driver who is both of those things.”

The elderly passenger, Esther, is played by the director’s own mother, Imelda Bourke, a former Adelaide jazz singer who was 87 when rehearsals began for the film around five years ago.

“I just knew I wanted her form of expression… I knew that she would be great in the role because I knew what she could do.”

When Blackwell attended the Sydney Writers’ Festival and saw Ali Al Jenabi on stage talking about the book based on his life – The People Smuggler – The true story of Ali Al Jenabi, the Oskar Schindler of Asia, by Robin de Crespigny – she immediately felt that he, too, would be perfect for her film.

“He just held your focus; he had this presence. He was very engaging, so immediately I knew he would be the best person to play that role, but it took me a very long time to convince him to do it.”

Blackwell further developed the character of the taxi driver through discussion with the real-life Ali, changing some of the dialogue to make it sound more authentic.

Her background as a theatre-maker influenced the style of the film, which she describes as “quite metaphorical”. Although Damage was produced and largely shot in Adelaide, she has sought to create a place that is somewhat dreamlike.

Most of the taxi scenes were filmed in Imelda Bourke’s garage.

“This film is totally self-funded and crowd-funded, so we really didn’t have a big budget,” Blackwell says.

“We painted her garage bright green and we created a green-screen studio in it so she and Ali could go and rest inside and she would feel comfortable being at home base.”

The music is almost like a third character in the film; Ali and Esther both respond to what’s on the car radio – although Esther initially hates the Arabic music her driver is playing.

The story unfolds over a single night, but Blackwell says the two characters go on a huge journey, ultimately discovering that despite their different situations, they have a lot in common.

As she explains in her director’s statement, she is interested in close-up portraits: “And this film is a portrait of two people. It is also a portrait of us, now… and the Australia we are creating.”

The Adelaide Film Festival opens tonight with a gala screening of science-fiction thriller 2067 and runs until October 26. Damage is screening at Palace Nova Eastend Cinema on October 18 and at Wallis Cinemas Mitcham on October 24.