I’ll never look at a 2-litre carton of milk in quite the same way again. Images of red balloons, nail-studded scarlet lingerie, waist-length dreadlocks and mega-merkins are similarly etched on my eyeballs.

Welcome to Glory Box – a wild ride through a series of performance pieces that are, by turns, cheeky, twisted, playful, dark, humorous, seductive and subversive.

Created and produced by Finucane & Smith – the partnership of self-described “queen provocateur” and performance artist Moira Finucane and theatre creator and director Jackie Smith – this late-night show in the Paradiso Spiegeltent in the Garden of Unearthly Delights is wickedly entertaining. 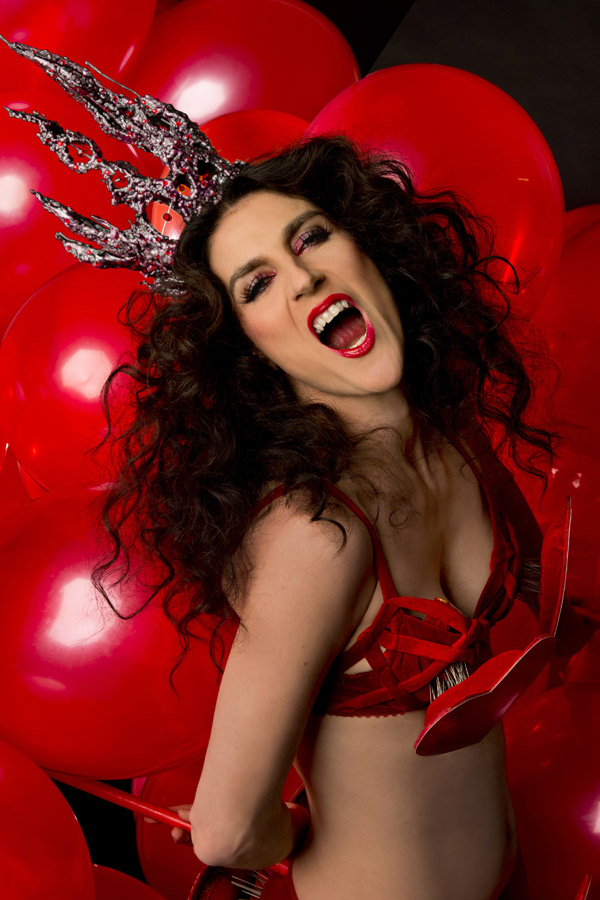 Oh, and did we mention nudity? Yes, there’s nudity – a lot of nudity.

Glory Box is subtitled “the burlesque hour”, but it has little of the coquettish flirtation usually found in burlesque. Instead, the show exudes a raw, almost animalistic sexiness; the all-female cast and their various roles are powerful and occasionally even a little intimidating. The stripping aspect doesn’t seem exploitative; rather, this is a production where the women are firmly in control.

Joining Finucane on the runway stage in the centre of the Spiegeltent are Azaria Universe, Lily Paskas, Jessica Wong, Lilikoi Kaos, Holly Durant and Sarah Ward. All are excellent, but special mention must be made of Ward’s rich, deep vocals, which offer a nice contrast to a series of lip-synching routines that would put most drag queens to shame.

Other highlights in the hour-long performance include a witty striptease with a twist, an impressive hoola-hooping display and a visually stunning – if slightly disturbing – vignette involving a gothic goddess in an ivory gown, a bowl, a spoon and a cascading river of red.

Glory Box is what Fringe is all about – bold, edgy and a little mad. It’s not a show for a conservative audience, kids or those seeking a “gentle” arty diversion, but I thought it was wickedly entertaining and beautiful.

Glory Box is in the Paradiso Spiegeltent, Garden of Unearthly Delights, until March 13.