Words can help us imagine the world more deeply. Even as we retreat into our homes in this time of crisis, words can help us reach out to each other and pile up strength.

The Stella Prize is awarded each year to celebrate Australian women’s writing. This year’s shortlist brings together some of the best Australian writing in any genre. They are books about courage, strength, compassion and love. And they give us something of what we need – teaching us that to be alarmed is not to be cautious or careful; that to try to bear everything on one’s own is not necessarily to be strong.

These books can help us draw on our inner resources; to dig deep. Not only to find a point of calm, or, indeed, relief from boredom as the lockdown wears on – but more importantly, compassion, altruism, the capacity to cross social distances, reach out, help and support each other and our society in a time of crisis.

The Weekend by Charlotte Wood

When you read The Weekend you’ll probably learn some things about yourself that you didn’t know, and a few you’d rather not. This book takes a long look at women’s lives and friendships as we get old, at a time in life when everything we thought we knew – about ourselves, about our loved ones – is being thrown into doubt. 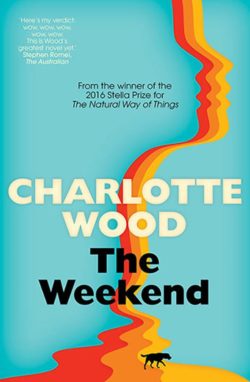 Three grieving women gather together for Christmas to clean out the beach house that belonged to their friend Sylvie, who has died. There is Jude, a once-famous restauranteur, who has spent her adult life in a love affair with a wealthy married man. Adele, a once-famous stage actress, who is newly impoverished, having just broken up with her partner Liz. She is yet to tell the others. Finally Wendy, a public intellectual in her waning years, grieving for her dead husband. Without Sylvie to balance them, tensions rise.

This book cuts like a knife through social pieties but never loses its humanity. In one particularly wicked scene, Adele conducts a “leisurely inspection” of her best friends’ washbags, casually laying bare their “private vulnerabilities”: who has constipation, who takes Valium, and who still uses age-defying face cream.

As the characters clean out the house of “depressing old things” that “nobody wanted” the tensions of grief and emotion pull them in unexpected directions. Old betrayals are unearthed, words can’t be taken back (“out it slithered in a disgusting mass”) and lives shatter.

Wood has a keen eye for the emotional havoc life wreaks, even – or especially – as we amble off into old age. Her observations are knife-sharp, often merciless, but also warm and deeply alive.

The Yield by Tara June Winch

Language can take you deep inside experience – because words teach you not only how to speak, but also how to think and feel. A large part of Tara June Winch’s new novel is written as entries in a Wiradjuri dictionary, put together by the dictionary-maker Albert Gondiwindi. 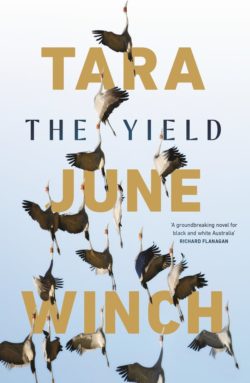 The first word – the “once upon a time for you” – is yarrany, Wiradjuri for a hickory acacia or spearwood tree, and Albert tell us “from it I once made a spear in order to kill a man”. Another word is baayanha, meaning yield, which Albert calls “a funny word”. In English the word “yield” is the reaping, the things that man can take from the land. But in Albert’s language “it’s the things you give to, the movement, the space between things”.

The action of The Yield centres on Albert’s granddaughter, August, who has returned to Country for her grandfather’s funeral after years in exile. Memories resurface, as August is entangled in circles of kinship, with aunties, nieces and cousins.

There are sombre notes. To August, everything is “browner, bone-drier”, and the evocative place name Massacre Plains reminds us that this is a site of invasion and violence. And then there’s the mystery of August’s missing sister, Jeddah.

The community is besieged by a mining development. Diggers roll into town, flanked by military-green Humvees. Winch charts the relationships between white activists and Indigenous rights groups, as they organise acts of resistance.

Aunty Betty and Aunt Carol Gibson get themselves locked against a fence in an act of protest. “Don’t fight back” says Mandy to August. “They can’t arrest us for sitting in”. Hours later rocks are hurled, water cannons discharge, and police squirt teargas. The past “filtered into their voices as they screamed together ‘Re-sist!‘”

Of course, Albert’s dictionary – “the old language, kept safe. Digitised. Captured forever” – is another kind of resistance. When August listens, she can hear the way “English changed their tongues, the formation of their minds”. This is also a book of hope in this resurgent language.

Here Until August by Josephine Rowe

The opening story in Josephine Rowe’s collection is called Glisk, a Scots word meaning a split second: a flash; a single instant. It’s a wonderful opening title in a short story collection that seems to telescope, stack and compress time, propelling characters across continents, through stark or solemn landscapes, or pinning them down in small towns. 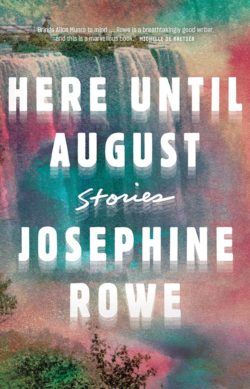 Rowe’s characters are mostly fleeing grief or trauma, trying to find solace in strange lands. In Glisk, protagonist Fynn returns after working in a whisky distillery in the Northern Isles of Scotland. The title conjures the fatal car accident that drove Fynn from Perth. But it also describes an earlier accident in which he and his siblings built a raft with foam and buckets so they could journey out to an island to see the bioluminescence in the ocean. Only that time, catastrophe had been avoided.

These are wonderful stories. In Chavez, an agoraphobic young woman grieving for a dead husband, stays at home watching terrorist videos, until a neighbour asks her to look after her dog, forcing her to engage with the world. In The Once-Drowned Man, a taxi driver and her passenger head for the Canadian border, engaging in an oddly uncomfortable struggle over grief and hurt.

Rowe’s stories deftly capture the fleeting and precarious moments that can shape and place us, or move us – like Fynn – towards a faltering redemption, “with the dark folding over the top of him”, all in a glisk.

There Was Still Love by Favel Parrett

Parrett’s third novel opens with an image of extraordinary dislocation, evoked through all the “little brown suitcases … on trains, and on carts” or “strapped to the top of buses” carried by people whose lives have been uprooted by war. Inside the suitcases, not just clothes and toiletries, but “all they can hold … your heart, your mind, your soul”. 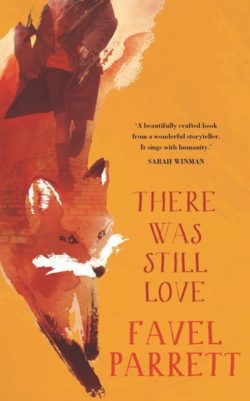 Favell’s novel tells the story of two sisters, Liska and Ludek, who are separated as teenagers, firstly by the Nazi occupation of Czechoslovakia and then by the Cold War. Ludek stays in Prague, while Liska travels to London and on to Melbourne.

Liska negotiates the problems of a second language, together with her husband’s straightened work opportunities. Ludek travels the world as a member of Prague’s Black Light Theatre, a child kept at home to ensure her return to life behind the Iron Curtain. Both raise children in vastly different worlds. Both build and sustain homes that are marked by love.

Parrett paints a picture of the sometimes troubling life lived in a communist state, coloured by vivid details of 1980s culture. The prose is lyrical, and the child’s perspective is diffuse with a kind of magic.

This is a book about strong women. It is a story about complicated family lives, longing for home, and the worlds women build – through love – for their families.

Diving into Glass by Caro Llewellyn

Just after her 40th birthday, Caro Llewellyn – recently arrived in New York, working her dream job as director of the PEN Festival for writers – collapsed as she ran through Central Park. In hospital a few days later, her neurologist told her that she had been diagnosed with multiple sclerosis, an illness associated with the central nervous system – chronic, debilitating and lifelong. 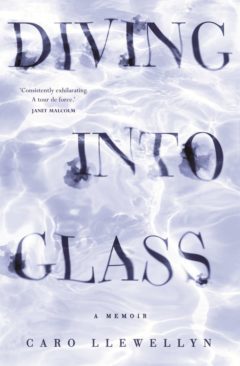 This memoir is a record of Llewellyn’s struggle not to be defined by her disability. Its title enviably encapsulates the things that glitter and shimmer and exhilarate in this book. A sense of breathless energy just leaps off the page. “I was a runner all my life,” Llewellyn writes. Not just long and short distance, but also hurdles and relay. “It didn’t matter what I ran, so long as I was spent when I crossed the finish line.”

This is a book about many things: Llewellyn’s career, the strength she draws from her charming and ingenious father who was wheelchair-bound, having been struck by polio at 20. He married twice, courting his first wife – a hospital nurse – from deep inside an iron lung. Llewellyn learned a lot from her parents, though not always strictly wise. They included, “carry on like absolutely nothing’s wrong”, “build an impenetrable wall around your weaknesses”, or best of all “no matter how impossible it seems, how long the odds, words and a good story can help you overcome every single thing stacked up against you”.

But, as Llewellyn writes, “The day my legs went numb on the running track in Central Park, every one of those lessons evaporated”.

This is not a book about overcoming illness or disability. It ends – much like it starts – with Llewellyn’s gaze on the horizon, searching.

See What You Made Me Do by Jess Hill

Jess Hill’s book is a deeply felt exploration of institutional failure. It opens with Hill standing in her backyard “hanging clothes out to dry on a stunning summer night alive with the screeching of fruit bats”, in a place where she “felt content, peaceful; safe”. Then comes the stunning realisation that many women do not get to feel safe, not at night, and not in their own backyard. 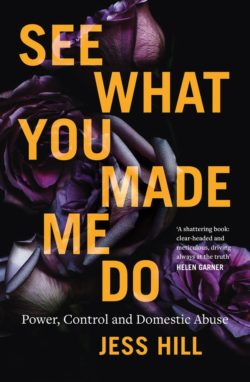 It’s 2015, a year on from the morning Australians woke up to see Rosie Batty, “a solitary woman, raw with grief” on their television screens. In front of her was “a clutch of reporters who’d barely hoped for a statement”. Batty told the media about the murder of her son – 11-year-old Luke Batty – at the hands of his father. It was the scenario she’d warned about countless times, in courts and police stations, in front of lawyers and judges and to social workers. Her pleas had been dismissed and disbelieved.

See What You Made Me Do brings together stories of domestic violence and survival from all walks of life – from the affluent neighbourhoods of Sydney’s Bible Belt to struggling remote and regional communities. Hill investigates the social and psychological causes of domestic abuse and its terrifying consequences. She talks to frontline social workers, counsellors who work the hotlines, and police.

Hill’s book maps the contours of a twisted public debate, through which the rights of children and women to safety – to feel secure, to live free from violence – are repeatedly brought up short by politics.

The Stella Prize will be announced online by Julia Gillard from 8pm (AEST) on Tuesday, April 14, 2020.

Camilla Nelson is Associate Professor in Media at the University of Notre Dame Australia. This article is republished from The Conversation under a Creative Commons licence.