One of the last live arts events I attended this year was the Adelaide Festival’s Fire Gardens, a wonderland of fire and flame created by French artists Compagnie Carabosse which drew thousands of people to the Botanic Gardens.

It was one of those festival spectaculars that brings together people of all ages who love a good show, with a feeling of shared joy all part of the overall experience as you rub shoulders and “ooh” and “aah” over the magic unfolding before you.

Fire Gardens, along with the 2020 Adelaide Festival, closed on March 15.

Within days, life as we knew it changed dramatically as the first restrictions were announced in a bid to control the spread of coronavirus, and the curtain came down on live arts and entertainment events across Australia.

All of which only adds to the resonance of Getting Their Acts Together, an hour-long ABC Arts documentary directed by Richard Jasek, narrated by Annabel Crabb and filmed over 18 months leading up to and during this year’s Adelaide Festival.

The documentary – which premiered last night and is now available to view on ABC iView – was timed to coincide with the Festival’s 60th anniversary, with Jasek saying: “60 years of one of the most significant cultural icons in Australia, with all its pedigree and ambition – not to mention the odd scandal – was a Russian Doll replete with nested stories.”

Getting Their Acts Together is framed around Festival artistic directors Neil Armfield and Rachel Healy, described by former AF executive director Rob Brookman in the film as like “the Margaret [Pomeranz] and David [Stratton] of the festival world”.

It’s a whirlwind of planes, trains and automobiles as the filmmakers follow the pair on a punishing travel schedule that takes them from France to Scotland, the Netherlands and elsewhere in their efforts to find and lock in the best possible mix of shows for their program. There’s highlights (the premiere of the operatic re-imagining of Mozart’s Requiem in Aix-en-Provence) but also disappointments and challenges that offer an insight into the passion and drive required to curate and present a world-class festival.

The filmmakers were clearly given generous access by the Festival, and while it’s a sympathetic portrayal, there’s a fly-on-the wall feel to the story as viewers witness Healy and Armfield’s (often amusing) bickering and creative differences. Jasek, whose previous films include a documentary about the inaugural year of the Art Gallery of SA’s Ramsay Art Prize, also spotlights the staff at the Festival’s King William Street offices whose work is essential in bringing the program to fruition.

There’s real-life drama aplenty ahead of the program release, including a last-minute panic to lock in a theatre centrepiece and concerns over the questionable OH&S procedures of a daring circus troupe, as well as during the festival itself, with performer injury and, of course, the spectre of COVID-19. 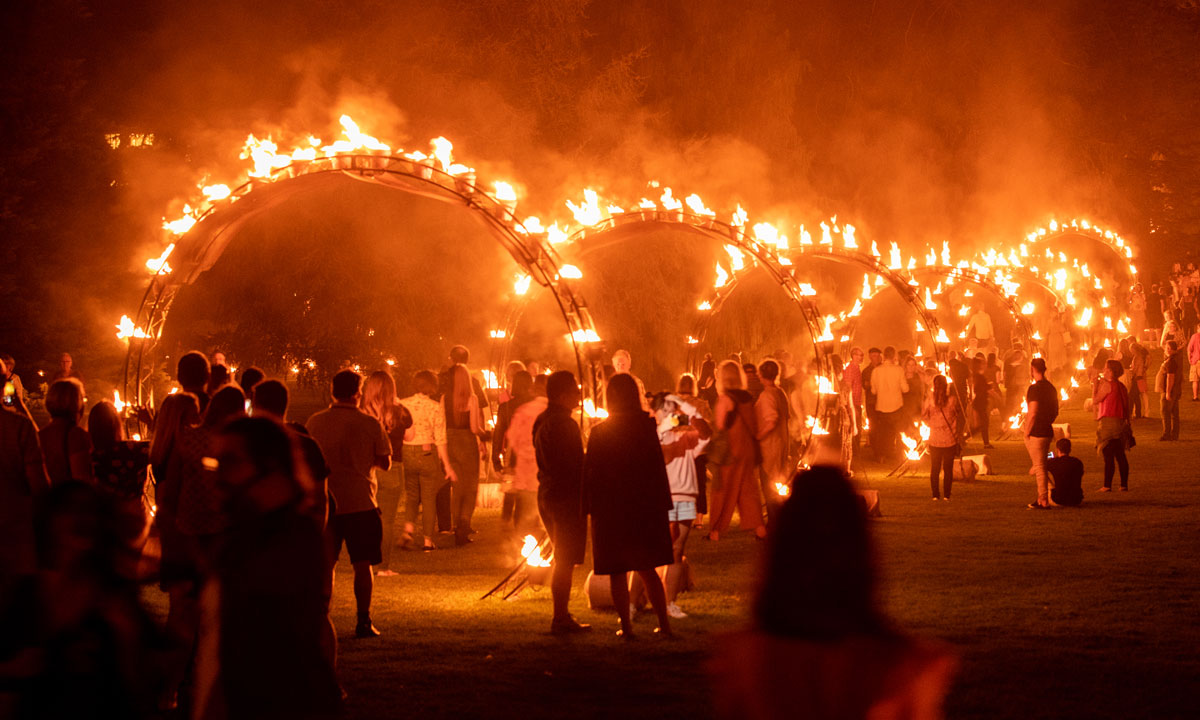 In promoting Getting Their Acts Together, the Adelaide Festival encourages viewers to witness as the artistic directors “hunt, negotiate and bicker their way to what was our most challenging year yet”, while Jasek comments: “Little did we know it would turn out to be their hardest ever, culminating with the tsunami of COVID19 that very nearly shut it down.”

Given continuing travel and performance restrictions as a result of the pandemic, presenting a festival in 2021 will likely prove even more challenging.

After the lockdown of recent months, it feels surreal to look back on large events like Fire Gardens, the Festival’s opening night concert in Elder Park and WOMADelaide, but the footage in Getting Their Acts Together will rekindle happy memories for many South Australians.

It is, as Jasek says, a reminder of how festivals bring us together – and fuels a yearning for a time when we can once again rub shoulders with like-minded individuals as we witness the magic of live performance.

Getting Their Acts Together is available to watch on ABC iView until June 19.