With each step he takes at the helm of Sydney Dance Company, Rafael Bonachela embraces this concept. This latest offering is a triple bill of premiere works from choreographers Larissa McGowan (Adelaide), Alexander Ekman (Sweden) and Bonachela himself. 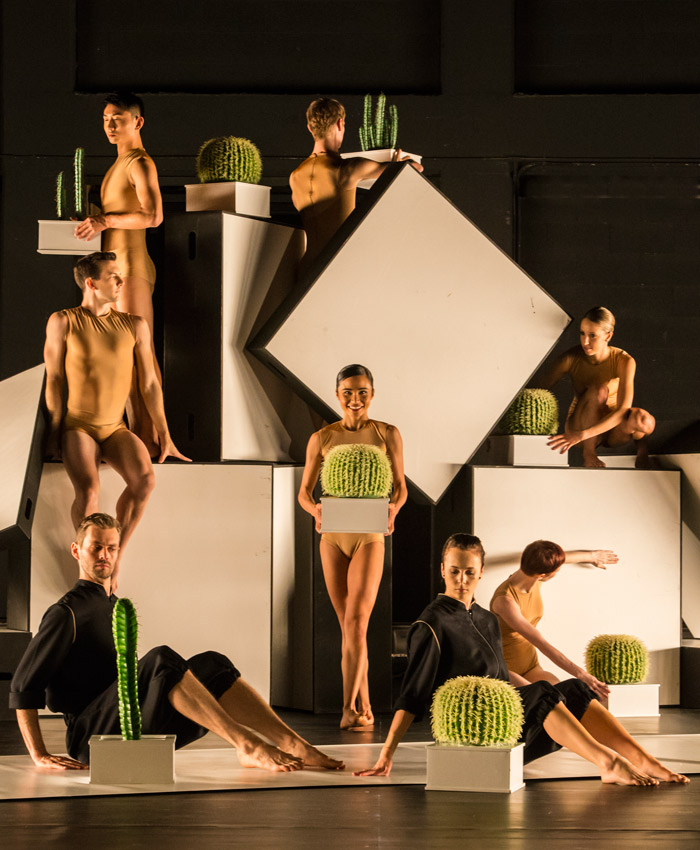 Emergence is a dense marriage of jagged and fluid movement, of concealment and exposure. Wales’ compelling, experimental pop music and Blasko’s poetic phraseology harmonise beautifully with the movement. Emergence is technically flawless, dark and inscrutable.

The highlight of the night, McGowan’s Fanatic, achieves exactly what it sets out to do: it “allows all kinds of audiences to find an appreciation of contemporary dance through a popular world such as film”.

Based on the films from the Alien and Predator  series, and the fan culture connected to them, McGowan’s concept is brilliant, hilarious and stunningly executed by a trio of Sydney Dance Company dancers.

The finale of the program is Ekman’s bold and irreverent theatrical piece, Cacti. The entire ensemble is deployed in this grand-scale production which manages to be both whimsical and cutting-edge at the same time.

The score for Cacti is the result of collaboration between the dancers and a string quartet on stage – the dancers’ percussive rhythm as counterpoint to the strings. This piece manages to be both an intelligent comment on our need to “understand” and analyse art, and a light-hearted, Chaplinesque send-up of the art form itself.

Bonachela’s efforts to popularise dance have led him to frequently present commissioned dance works from Australian and visiting international guest choreographers alongside his own creations, ensuring the diversity that is much needed for contemporary dance to reach a broader audience.

Sydney Dance Company is presenting  De Novo at Her Majesty’s Theatre until August 8.